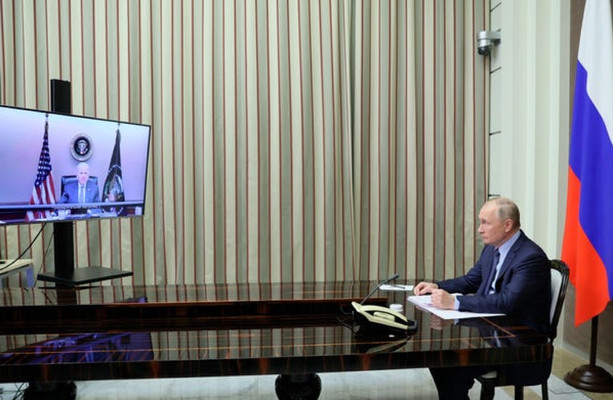 PRESIDENT JOE BIDEN said Wednesday he had warned his Russian counterpart Vladimir Putin of unprecedented US sanctions should Russian troops massed on the border of Ukraine launch an attack.

A day after talking for two hours by video link, Biden said Putin got “the message.”

But Biden added that sending US troops to confront Russia was “not on the table.”

Asked in an interview with Die Welt TV whether he could imagine using the pipeline as leverage to ward off a Russian attack on Ukraine, Scholz said his government wants “the inviolability of the borders to be respected” and “everybody understands that there would be consequences if this were not the case.”

The White House had already suggested immediately after the video summit that stopping the Nord Stream 2 pipeline could be part of an economic response, although the issue is controversial in Europe, which relies heavily on Russian energy resources.

France’s foreign ministry said in a statement that Russia would face “strategic and massive consequences.”

Putin, however, defended Russia’s movement of up to 100,000 troops to the border of Ukraine, describing this as a defensive measure amid fears in the Kremlin that the one-time Soviet republic is being pulled into NATO’s sphere.

“Russia has a peaceful foreign policy, but has the right to defend its security,” Putin said at a news conference with Greek Prime Minister Kyriakos Mitsotakis.

“We cannot but be concerned about the prospect of Ukraine’s possible admission to NATO, because this will undoubtedly be followed by the deployment of appropriate military contingents, bases and weapons that threaten us,” he said.

The Russian leader stressed that NATO expanding eastwards is a “very sensitive” issue for Russia.

Ukraine’s Western-leaning government wants to join the NATO military alliance but is nowhere close to being admitted. Russian troops already occupy Ukraine’s Crimea peninsula and Russian-backed separatist forces have carved out a pro-Moscow territory covering a swath of eastern Ukraine.

Biden said that in addition to economic measures, a new Russian attack on Ukraine would trigger a bolstered US military presence on the territory of existing NATO allies in eastern Europe.

“We would probably be required to reinforce our presence in NATO countries to reassure particularly those in the eastern front. In addition to that, I made it clear that we would provide a defensive capability to the Ukrainians as well,” he said.

The United States already works closely with the Ukrainian military and has provided millions of dollars in weaponry. However, Biden said that sending US troops to defend Ukraine without NATO agreement was ruled out.

“The idea the United States is going to unilaterally use force to confront Russia invading Ukraine is not on the cards right now,” Biden said. “We have a moral obligation and a legal obligation to our NATO allies under Article Five. It’s a sacred obligation. That obligation does not extend to… Ukraine.”


“But it would depend upon what the rest of the NATO countries were willing to do as well,” Biden said, seemingly leaving the door to intervention open just a crack.

Regarding Russia’s contention that NATO expansion into its former Soviet strongholds poses a threat, Biden said Moscow and the major NATO allies were working at a high level on “whether or not we could work out any accommodations as it relates to bringing down temperature along the eastern front.”

Ukraine’s President Volodymyr Zelensky, who has said he is ready to negotiate with Putin, welcomed Tuesday’s video summit.

He is due to hold talks with Biden on Thursday.

Ukraine has been fighting pro-Russia separatists in its eastern Lugansk and Donetsk regions since 2014, shortly after Moscow seized Crimea.

Kiev and its Western allies accuse the Kremlin of supporting the separatists with military, financial and political cover – claims Moscow denies – in a conflict that has claimed over 13,000 lives.