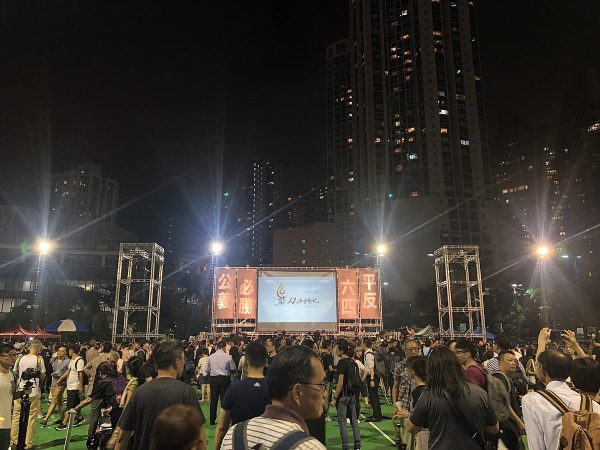 Jimmy Lai, Chow Hang-tung, and Gwyneth Ho were convicted for either taking part in or inciting others to join the candlelight vigil in 2020.

The Hong Kong Tiananmen vigil in 2019, the last year it was legally held.

Hong Kong tycoon and prominent pro-democracy activist Jimmy Lai and two others were convicted Thursday for their roles in last year’s banned Tiananmen candlelight vigil, amid a crackdown on dissent in the city and Beijing’s tightening political control.

Lai, together with Chow Hang-tung, a vice chairperson of the now-defunct vigil organizer the Hong Kong Alliance in Support of Patriotic Democratic Movements of China, and activist and former reporter Gwyneth Ho were convicted for either taking part in or inciting others to join the candlelight vigil in 2020.

They are among 24 activists who were charged over their roles in the unauthorized assembly in Victoria Park on June 4 last year, during which thousands of people gathered to light candles and sing songs in the park despite police warnings that they may be breaking the law.

The Hong Kong Alliance previously organized a candlelight vigil in the city’s Victoria Park on June 4 each year to mark the bloody crackdown on protesters campaigning for more democracy in Beijing’s Tiananmen Square in 1989.

Last year, authorities banned the protest for the first time in three decades, citing social distancing restrictions and public health risks due to the coronavirus. The protest was also banned this year.

Prior to the ban, massive crowds attended the annual candlelight vigil and it was the only large-scale public commemoration on Chinese soil of the 1989 crackdown in Beijing.

The trio had previously pleaded not guilty to the charges. Court will resume on Monday, when they can enter mitigation pleas before sentences are handed down.

“The Hong Kong government has once again flouted international law by convicting activists simply for their involvement in a peaceful, socially distanced vigil for those killed by Chinese troops on 4 June 1989,” said rights group Amnesty International’s deputy secretary general Kyle Ward in a statement.

“These convictions merely underline the pattern of the Hong Kong authorities’ extreme efforts to exploit the law to press multiple trumped-up charges against prominent activists,” he said.

Ward added that prosecuting people who mourn and remember the victims of the Tiananmen crackdown is an “egregious attack on the rights to freedom of expression and assembly.”

Most of the activists who had been charged over the banned vigil had previously pleaded guilty, including outspoken activist Joshua Wong, who was given 10 months in jail for his participation in the vigil. He was already in jail serving time after previously being found guilty of other charges related to his activism.