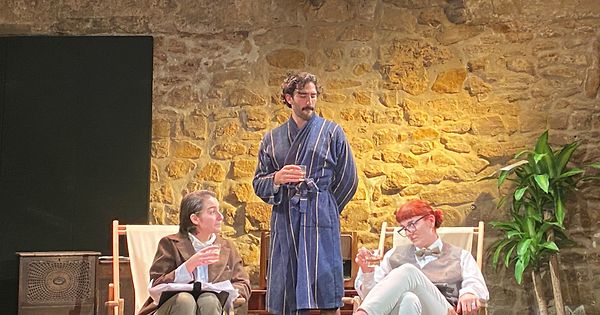 Richtung 22 staged a play about Gérard Cravatte, a Luxembourgish industrial and diamond miner

Western countries rarely acknowledge the degree to which their wealth and power are due to their colonial past. From the enslavement of African people all the way to the looting of tropical riches for their own profit, Western nations rarely take responsibility for a long history of violence and crime, often under the guise of spreading civilisation.

In Luxembourg, most people are unaware of the role the country played as a colonizer. The country likes to see itself as being oppressed itself, because of the occupation of its territory by stronger European powers.

But Luxembourg has a colonial history of its own, even if it is absent from history books and the public debate. The country is still honouring racist figures who brought prosperity to the country and cruelty and torture to others.

Richtung 22, a group of young theatre and film artists, tried to change that assumption of innocence in Luxembourg through staging a play at the beginning of October. The piece told the story of Gérard Cravatte, a Luxembourgish industrial and the head of a diamond mining company. The satirical play follows his fight against the decolonization of Congo, showing his racist agenda to make profits at the expense of the local people.

The piece – entertaining despite its serious message – manages to shed light on a part of Luxembourg’s history that is unknown to many. It makes one aware that the privilege of growing up in a western country comes with a responsibility to know about our dark colonial history.

Richtung 22 also set up a small exhibition at the Casino in the city of Luxembourg. The presentation, called Mémoire coloniale Luxembourgeoise, regroups street signs still visible across the city honouring colonisers such as Christopher Columbus, Maurice Pescatore, and Prince Henry.

In a solemnly decorated room, several street signs are hanging next to descriptions of the atrocities that the men they honour committed. They include colonial wars, racist violence and the persecution and torture of indigenous people for their personal gain. “Where is my street sign?” one of the signs ironically asks. “Where it belongs, in a museum” it answers.

Christopher Columbus is one of the men figuring on the street signs. Still widely admired as the man to have discovered America, his 1492 journey meant the rapid demise of native empires such as the Aztecs and the Mayans, the deaths of millions of people through disease and war, and centuries of exploitation. His aim was “to enrich himself under existing law by securing 10 percent of all revenues from the ‘New World’ for his lifetime,” the exhibition says.

Jean-Pierre Pescatore – a name most will only know from the eponymous bus stop – is a similar case from Luxembourg. A descendant of a wealthy merchant family, Pescatore held exclusive rights to the Cuban tobacco trade. His name figures on one of the capital’s most central streets and lives on in the Fondation Pescatore, a charitable organisation. But his wealth was built on a legacy of slave labour and the oppression of African and native American labour and the respectable aura associated with the name Pescatore hides a dark truth.

Richtung 22 takes an audacious step by questioning the legacy of men that brought riches to the West and misery elsewhere. The street signs are real, although the group would not disclose how they got hold of them, saying “they appeared and somehow came into our possession”.

Luxembourg’s road service has filed a legal complaint against Richtung 22, which city mayor Lydie Polfer then retracted. But it is doubtful whether Polfer was truly convinced by the intentions of the group of artists, or whether she was just trying to avoid bad publicity by sueing an artistic collective just at the launch of the Luxembourg art week.

Showing the signs that thousands of people walk past on any given day without noticing them in a museum is a nod to the vast amount of stolen non-Western artifacts on display in European colonial or anthropological museums. Settlers and western governments “bought” many cultural object – or stole them outright – and very few of those have found their way back to where they came from. Similarly, Richtung 22 has no intention to return the signs to the city. It is a bold and timely step to force Luxembourg to face its colonial past and think about how far the country will go to pay back for a past rooted in oppression.