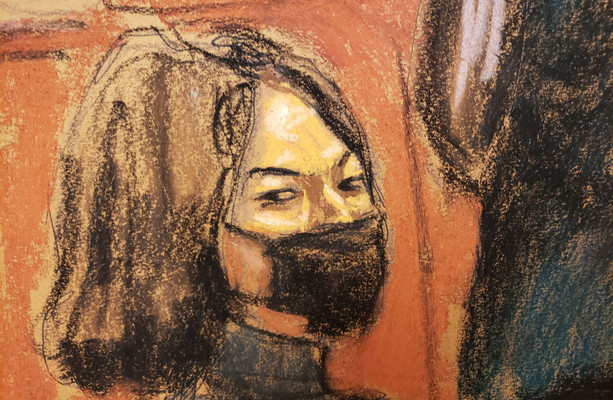 A WOMAN TESTIFIED at the sex trafficking trial of Ghislaine Maxwell that the British socialite touched her breasts during a massage at the New Mexico ranch owned by the late American financier Jeffrey Epstein.

Annie Farmer, the only one of four accusers to testify using her real name, said she was 16 years old at the time.

Farmer, now 42, is expected to be the final accuser to take the witness stand at the trial of the 59-year-old Maxwell.

Maxwell is accused of grooming underage girls to be exploited by her long-time partner Epstein, who killed himself in jail two years ago while awaiting trial.

She has pleaded not guilty to six counts of enticing and transporting minors for sex.

Farmer described meeting Epstein on a trip to New York to visit her sister Maria, who was then 25 and an Epstein employee.

She said Epstein bought her a commercial plane ticket to visit Maria in Manhattan in December 1995 and seemed interested in helping her with her education.

She said she saw him twice, the first time at his Manhattan townhouse. “He seemed very friendly and down to earth,” Farmer said.

She said they had champagne together before the sisters went to see the play Phantom of the Opera.

The three of them later went to the movies and Epstein sat in between the two sisters, she said.

At some point, Epstein reached over and started “caressing” her hand, foot and leg, Farmer said.

“I was very surprised and was very nervous and anxious,” she said. “I felt sick to my stomach.”

Farmer said she didn’t tell Maria because she feared for her sister’s job.

Farmer said that in April 1996, she was invited to go alone to Epstein’s New Mexico ranch to stay with him and Maxwell.

She said she “did not want to be alone with him” but she thought that since Maxwell was his romantic partner he would not behave as he had previously.

Staying with them “made me feel special,” she said.

Farmer said Maxwell was “very outgoing, talkative and engaging with me.”

She said they went shopping and bought her cowboy boots.

‘I felt kind of frozen’

Later that weekend, they went to the movies and Farmer said she “imagined it would be different this time because Maxwell was there.”

But Epstein began caressing her again, she said, and this time it was “blatant” and “throughout the film.”

Farmer said Maxwell asked her to give a foot massage to Epstein at one point.

“I felt very uncomfortable,” she said.

Farmer said Maxwell later told her she “would be happy to give me a massage.”

She said she was naked under a sheet on a massage table set up in the room where she was staying.

She said Maxwell “pulled the sheet down and exposed my breasts” and began rubbing them.


“I felt kind of frozen,” she said. “I wanted so badly to get off the table.”

She said Epstein wasn’t there but the door was open and “I just had this sense that he could see me.”

The next morning, she said Epstein came “bounding into the room” saying he “wanted to cuddle.”

“He climbed into bed with me,” she said. Farmer said she went to the bathroom and waited hoping he would leave.

“I just wanted the weekend to be over,” she said.

Farmer said she received $1.5 million from the Epstein victims’ fund but has no financial stake in the current case.

Maxwell, dressed in a brown turtleneck and black slacks, chatted with her lawyers during the testimony and passed them occasional notes.

Previous accusers have testified that they were as young as 14 years old when Maxwell allegedly began grooming them and arranging for them to give massages to Epstein that ended in sexual activity.

One woman, “Carolyn,” said she visited Epstein’s Palm Beach home more than 100 times when she was between 14 and 18 years old.

The prosecution is expected to rest today.