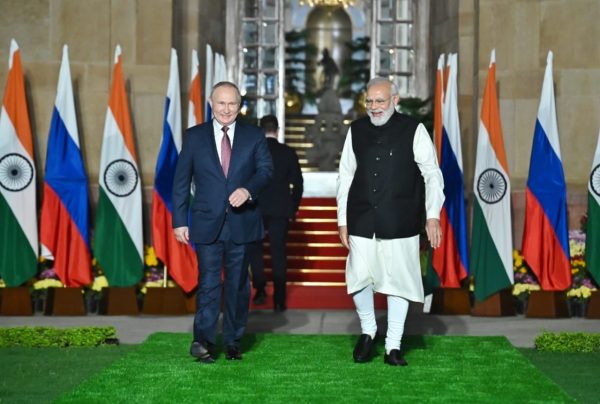 The first ever 2+2 dialogue between India and Russia’s foreign and defense ministers on December 6, indicated further strengthening of the security and strategic bilateral relationship. At the same time, a visit by President Vladimir Putin to New Delhi for the 21st India-Russia annual summit is telling, specifically at a time when the long-range S-400 surface-to-air missile defense system (priced $5.4 billion) is en route to India. Putin’s visit attracts a great deal of attention; since the onset of the COVID-19 pandemic this was his second visit abroad, after a summit with U.S. President Joe Biden in Geneva in June.

While Prime Minister Narendra Modi underlined the bilateral relationship as a “special and privileged strategic partnership [that] continues to become stronger,” Putin couched India “as a great power, a friendly nation and a time-tested friend.” A key outcome of the summit was the signing of a 10-year defense technical cooperation agreement, as well as a $600 million deal to manufacture over 600,000 AK-203 Kalashnikov rifles in India as part of the Indo-Russian joint venture. Furthermore, both countries set an ambitious goal of enhancing the bilateral trade to $30 billion by 2025. Overall, the summit included the signing of 28 agreements.

This summit and its outcomes come against the backdrop of the shifting geo-strategic dynamics in the Indo-Pacific region. Historically, India has followed a non-alignment policy with strong friendly (quasi-alliance) ties with the former Soviet Union. After the disintegration of the Soviet Union, China showed positive overtures to woo India, which included maintaining peace and tranquility along the disputed 3,488 kilometer long border, enhancing bilateral trade, and ensuring sufficient space for the two countries to rise simultaneously. In the process, India joined institutional frameworks initiated by China, such as Brazil, Russia, India, China, and South Africa (BRICS); Russia, India, and China (RIC); and the Shanghai Cooperation Organization (SCO) to engage China more robustly. Furthermore, India’s transition from non-alignment to maintaining strategic autonomy fitted well within China’s broader strategic calculations to marginalize the United States in Asia.

However, in recent years China’s building of infrastructure along the disputed border, excessive interference in South Asia (traditionally a region of India’s influence), and enhanced maritime influence in the Indian Ocean disturbed the evolving relations and widened the trust deficit between two. Furthermore, construction of permanent infrastructure as part of the China-Pakistan Economic Corridor in Pakistan-administered Kashmir, which India claims to be its sovereign territory, led India to boycott the Belt and Road Initiative. Overall, India faces a security dilemma vis-à-vis China.

To offset the security dilemma posed by Beijing, New Delhi identified a growing convergence with the United States against the strategic challenges posed by a rising China. In the process, India got special concessions from the U.S. to develop its nuclear program without signing the Treaty on the Non-Proliferation of Nuclear Weapons (NPT). In response, India entered into several foundational agreements with the United States, in addition to supporting the U.S.-initiated Indo-Pacific geo-strategic construct and joining the Quadrilateral Security Dialogue along with Australia and Japan. The defense trade between the two increased from $200 million in 2000 to over $20 billion in 2020, and India’s arms import from the United States increased by 557 percent during this period, making it the second largest arms supplier after Russia. This proportionally reduced India’s arms imports from Russia by 33 percent. This warming relationship led to New Delhi entering into the U.S.-India Joint Strategic Vision for the Asia-Pacific and Indian Ocean region. To implement the Vision, both started to conduct joint military exercises encompassing all three services: army, navy, and air force.

Notwithstanding the deepening of relations, India maintains apprehensions about the U.S. intentions, particularly whether it would support New Delhi in critical circumstances. This was witnessed when Chinese troops stationed themselves in Galwan Valley on the Indian-controlled side of the disputed territory. That engagement ultimately led to the killing of 20 Indian troops and an undisclosed number of Chinese soldiers. Upsetting India’s expectation of receiving support from the U.S., then-President Donald Trump offered to mediate between India and China rather than criticizing the PLA forces’ intrusion into Indian territory. Similarly, although then-U.S. Secretary of State Mike Pompeo conveyed a message of support to India, the nature of the support remained undefined. With these U.S. responses India felt it had been left high and dry.

Under these compelling circumstances, New Delhi fell back on the Treaty of Peace, Friendship and Cooperation that was signed with the Soviet Union in 1971 and further upgraded to a Strategic Partnership with Russia in 2000. India’s Defense Minister Rajnath Singh urged Russia to supply 21 MiG-29 Fulcrum and 12 Su-30MKI Flanker aircraft and spare parts on a priority basis as well as to pressure China to maintain peace and tranquility across the disputed border as per the agreements signed between New Delhi and Beijing. India also requested Russia to expedite delivery of the S-400 missiles, for which India had placed an order in October 2018.

In response to the S-400 purchase, the former Trump administration threatened India with its Countering America’s Adversaries Through Sanctions Act (CAATSA). The new administration of Joe Biden, despite further strengthening of bilateral relations and the convergence of strategic interests with India, holds similar views on India’s acquisition of advanced military technology from Russia.

India’s imports of military technology from the Soviet Union/Russia and entering into joint ventures over the last five decades led to long-term interdependency in the defense sector. Considering China and Russia’s convergence of strategic interests, India sought to diversify acquisition of its military technology from France, Israel, the U.S., and other countries; however, India still remains heavily reliant on Russian military technology. Over 70 percent of Indian military equipment and weapon systems is of Soviet/Russian origin. An added advantage for India is that Russia allows production of many of its weapons in India as joint ventures, a startling example of which is production of the Brahmos supersonic guided missiles. India is the only foreign country with which Russia signed a long-term agreement on military technology cooperation from 2011-2020, which has been further extended for 10 years. From a cost-effective perspective also, Russian technology gets a leg up compared to other competitors. Furthermore, to embed and strengthen defense relations, India conducts the Indra tri-service military exercises with Russia on the pattern of the military exercises with the United States.

Notwithstanding deepening of the relations with the U.S. over the last two decades, India still appears to lack trust in its strategic relations with Washington. New Delhi also has apprehensions about Russia’s close defense and strategic proximity with China. Against this backdrop, India is likely to engage both powers simultaneously to counterbalance China while retaining its strategic autonomy. This indicates that without entering into close alignment with either the U.S. or Russia, India would engage both as per its security and strategic requirements. In the long term, India appears to have its own ambition of becoming a big power; thus aligning with either the U.S. or Russia may hamper its goals.

Considering the evolving geostrategic dynamics, India can afford to take calculated risks. As against Russia’s displeasure it may play an active role in the Quad as Moscow cannot afford to risk alienating the country that buys 25 percent of Russia’s total military exports. Similarly, the United States may not invoke CAATSA as India stands as a bulwark against China in the Indo-Pacific region, in addition to being a lucrative defense market. Considering this, Indian strategists and policy makers appear skeptical to use the term “alliance” to describe these relationship/ instead they prefer to emphasize India’s commitment to “multilateralism” or “multi-polar” diplomacy. Indian Foreign Minister S. Jaishankar stated that a multi-polar Asia is one of the essential constituents of the evolving geo-strategic order and the core of India’s regional strategy.