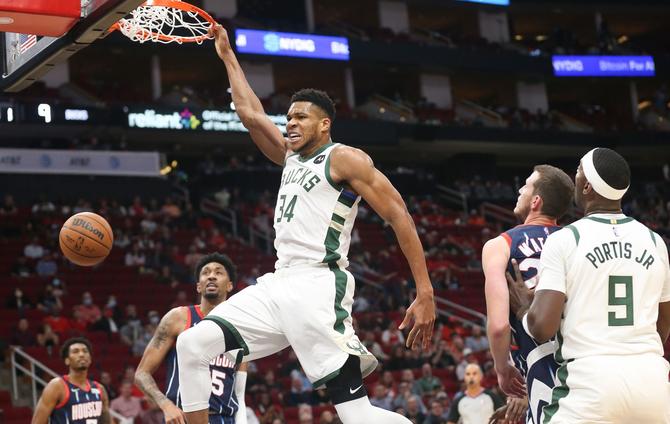 Antetokounmpo also had five assists, three steals and two blocked shots as the Bucks snapped the Rockets’ winning streak at seven games.
“I was just looking to be aggressive,” Antetokounmpo said. “Last game I wasn’t as aggressive as I wanted.”

He got plenty of support from his teammates, especially Khris Middleton and Bobby Portis, who each scored 21 points and added eight rebounds.

The Bucks extended their lead to seven points, 119-112, with 47 seconds left in the fourth when Antetokounmpo slammed a dunk home.

Milwaukee coach Mike Budenholzer said they know they can count on Antetokounmpo and Middleton down the stretch.

“When you have a good team and have players like that, you’re fortunate to put the ball in their hands and let them make plays,” he said.

Houston hadn’t lost since ending a 15-game losing streak by beating the Chicago Bulls on November 24. The Rockets led by 10 at one stage Friday and hung around until the Bucks were able to pull away in the fourth.

Garrison Mathews finished with a team-high 23 points, including a half dozen threes, as the Rockets made Milwaukee work for the victory.

LeBron James scored 33 points to lead the Los Angeles Lakers to a 116-95 win over the mistake-prone Oklahoma City Thunder.

James had an immediate impact, scoring Los Angeles’ first six points of the game. He shot 13 of 20 from the field, including making nine of 10 shots in the opening half.

Avery Bradley scored 11 of his season-high 22 points in the third quarter for the Lakers.