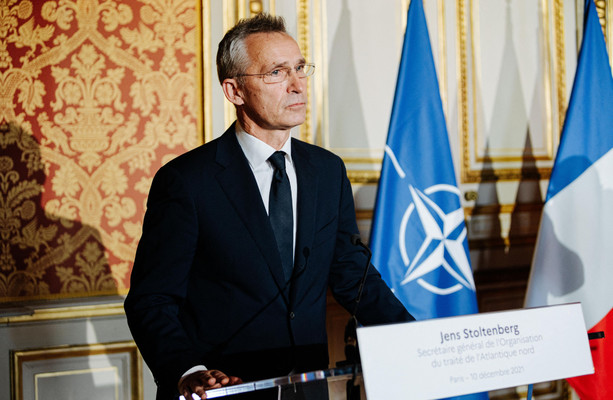 NATO SECRETARY GENERAL Jens Stoltenberg today rejected Russia’s call for the West to withdraw its invitation to Ukraine to join the alliance.

“NATO’s relationship with Ukraine is going to be decided by the 30 NATO allies and Ukraine – no one else,” Stoltenberg said, at a joint news conference with Germany’s Chancellor Olaf Scholz.

“We cannot accept that Russia is trying to re-establish a system where big powers like Russia have spheres of influence, where they can control or decide what other members can do.”

“In the fundamental interests of European security, it is necessary to officially disavow the decision of the 2008 NATO Bucharest summit that ‘Ukraine and Georgia will become NATO members’,” it said.

In the past few weeks, Russia has moved around 100,000 troops to Ukraine’s border, sounding alarm bells in Washington and at NATO’s Brussels headquarters.

This week, Russian President Vladimir Putin and US leader Joe Biden held two hours of talks, with the Kremlin chief demanding the West guarantee that Ukraine would not become a NATO launchpad.

The Western allies are concerned about the Russian build-up, but have redeclared support for Ukraine’s sovereignty and warned Russia of deep “strategic and economic” consequences if it invades.

Stoltenberg was clear, insisting that while Western leaders are open to talks, they will “not compromise on the rights of every nation in Europe to decide their own path.

“This is enshrined in many documents and agreements that also Russia has signed,” he said, citing European security agreements going back to the Cold War.

“It has been clearly stated that any sovereign independent nation of course has the right to choose his own path, including what kind of security arrangements he wants to be part of.”

Scholz, who took power on Wednesday and was on his first trip as chancellor to NATO, also warned Russia.


“NATO Allies agree that any further aggression against Ukraine will come at a high price and have serious political and economic consequences for Russia,” he said.

The German leader is under pressure to commit to halting the opening of the Nord Stream 2 pipeline between Russia and Germany if Moscow attacks Ukraine.

He has not promised this, but he said: “We call on Russia to return to diplomacy and to de-escalate and to respect Ukraine’s sovereignty and territorial integrity.”

Ukraine and Georgia are not on the verge of joining NATO, which has a mutual defence pact that would see other members mobilise to defend a partner if attacked.

But the United States and some allies help train Ukrainian forces, and Washington committed more than $2.5 billion to bolster a military that crumbled in the face of the Russian assault back in 2014.