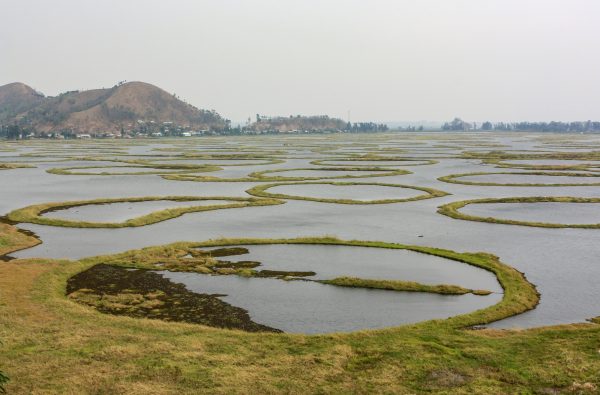 Nestled in the valley of Manipur, Loktak Lake is the largest freshwater lake in northeast India. It is a Ramsar-designated wetland of international importance and home to the last wild population of the highly endangered brow-antlered, or sangai, deer. However, according to locals and environmentalists, a recent hydropower project is gradually destroying the lake’s ecosystem, greatly harming local livelihoods and threatening the habitat of Manipur’s beloved sangai.

In post-independence India, dams have long been lauded as signs of modernity and progress; hydropower is also crucial to India’s commitment to producing 40 percent of its energy from renewable sources by 2030. Currently around 170 dams are being planning for the northeast of the country. However, activists and locals point with caution to the environmental and social damage this barrage has caused Loktak and its animal and human populations: the water quality is depleting, the vegetation thinning out, and fish species and edible plants disappearing.

The World’s Only Floating National Park Under Threat

Wedged between Myanmar and India’s Assam, Loktak is one of the last remaining pats, or lakes, of an ancient wetland system once covering much of Manipur, a remote, conflict-ridden state. A proudly independent kingdom, the state was forcibly subsumed into India following Indian independence in 1947, setting off decades of conflict between ethnic groups and the Indian state. Today, Manipur is slowly emerging from over half a century of political unrest and violence.

Of this ancient wetland, only a few pats remain; most have been replaced with concrete. Loktak is 250 square kilometers in size and is by far the largest. Nicknamed the belly of the state, it is renowned for its phumdis, tangled clumps of biomass, vegetation, and soil, half-submerged, half-floating in the water. Famously, local fishermen have sculpted these phumdis into natural fish farms, creating a covering of perfectly symmetrical circles across the lake.

Loktak is also home to the world’s only floating national park, Keibul Lamjao, a 40 sq km area of phumdis, home to the sangai deer, along with a plethora of migratory birds and plant-life. The sangai were actually thought to be extinct until the 1950s when a small group was found living on the phumdis of southern Loktak; their rounded hooves mean they can survive only on Loktak’s spongey biomass. The 2016 census counted 260 sangai remaining in the park.

According to Oinam Maipakchao, a local social worker, the residents of the Loktak area are now facing unprecedented environmental and social challenges, that can be linked mainly to the construction of a hydroelectric dam, the Ithai barrage, across the lake’s main draining outlet in 1983. “This destroyed the natural flushing cycle of the lake which kept the waters clean and the phumdis strong,” he explains.

He describes how before the dam, during the dry season the phumdis would fall with the water level, feeding on nutrients and soil from the base of the lake. Then, in the monsoon, they would rise, along with their cargo of soil and silt, and be flushed through Myanmar to the Bay of Bengal. This, he says, was a natural draining cycle that acted as flood control for the valley as well as purging the lake of the debris and dirt.

According to Maipakchao, the consequences of the dam for the wetland are severe. Now, with constant water levels and no natural outlet, the phumdis are building up, along with the silt and dirty water. He explains that the inability to feed in the dry season means the phumdis are thinning out and breaking up. Water pollution and the weakening of the phumdis are reducing fish migration; numerous fish species are already disappearing, as are the migratory birds seeking food.

On a visit to Keibul Lamjao, Maipakchao points to the parts of the phumdis in the national park are now submerged in water. This, he says, is a sign of poor health. A study carried out in 2020 found that the areas of the national park that are suited to the sangai are indeed decreasing in size. The study identifies the impact of the Ithai barrage and the thinning of the phumdis as major drivers of these changes.

The Human Impact of the Dam

The permanent flooding of the lake also submerged large areas of agricultural land once used for crops and buffalo grazing. The displaced farmers were left with little choice but to move to the city to seek jobs or join the ranks of the fishing community. The lake was also a major source of plant food sources, such as water chestnuts, which are no longer able to germinate as they need shallow waters.

While scrapping muddy gunk from his old fishing net, looking out over the lake, Ahnonjao Singh, a local fisherman in the lakeside village of Thanga, explained, “before the dam, there were so many fish; our fishing techniques were quite different.”

Singh is 60 and has lived on the banks of Loktak his whole life. He describes how the wetland is entwined with the economic, social, and spiritual lives of the local people who over generations developed a range of fishing techniques for all seasons. Local religious rituals are not complete without certain types of fish and flowers from the lake, some of which they are now struggling to find. “She gives us life,” Singh said. “But we don’t know how much longer she will live.”

Today, according to Maipakchao, 95 percent of the local population are fishers, relying on the lake’s declining fish stock for a living. With scant government help available, out of necessity, many fishermen build shacks, or phum-shangs, on the phumdis, and live out on the lake for months at a time with their families. However, between 2011 and 2013, citing environmental concerns, the state government controversially cleared over 700 of these phum-shang, offering minimal recompense to the fishermen.

In an interview in the state capital of Imphal in February 2020, Ram Wangkheirakpam, from the NGO Indigenous Perspectives, explained that the effects of the dam run deep for the local community. “This is not a one-time experience. For the local people the impacts are long. Even after 30 years people are still suffering. It has been three decades and people are still trying to make sense of their lives. They have lost their habitat and are still trying to locate themselves legally or otherwise.”

He continued, “Loktak brings an example of how dams can affect people. For people not affected by a dam they will never understand this. Many people in Loktak have not been compensated. Even when people have been compensated and rehabilitated, the impact goes on. It passes down generations.”