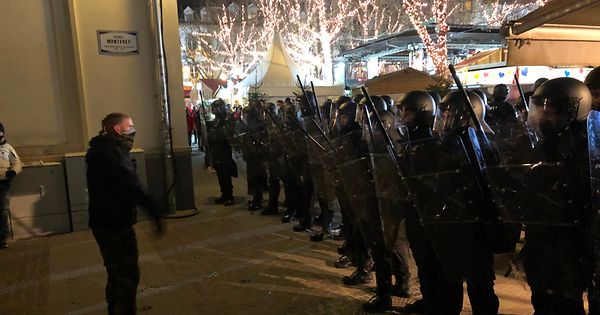 An anti-vaccine protest largely passed off peacefully on Saturday, with no repeat of the violence seen last weekend, although police temporarily closed Christmas markets and deployed water cannons to disperse demonstrators attempting to breach an agreed protest zone.

There were around a dozen arrests in connection with the demonstration, which had been restricted to an area from the Glacis in Limpertsberg to the Kirchberg district across the red bridge, following scenes of disorder on the previous Saturday.

By 17:00 hrs, most of the demonstrators had dispersed, although groups made their way to the city centre, prompting police to guard buildings and temporarily close the Christmas markets in Place d’Armes and Place de la Constitution.

The police had advised the public to avoid the area, and the presence of riot squads blocked traffic and public transport services.

Police came fully prepared for any disorder, with sniffer dogs, barbed wire, helicopters and reinforcements from Belgium along the protest route and throughout the city to avoid a repeat of violence last weekend, when hordes of demonstrators pulled down barriers and attempted to force their way into the Christmas market at Place de la Constitution.

There was also additional security outside Luxembourg’s Chamber of Deputies and the home of Prime Minister Xavier Bettel, which were the scene of demonstrations last weekend.

The protest last weekend came after Luxembourg’s government announced it would introduce measures requiring daily negative tests from workers refusing vaccinations, expected to take effect on 15 January. Similar rules essentially barring the unvaccinated from restaurants, cafes and many other leisure facilities came into force this week.

Around several hundred protesters – police put the total at 500 – gathered on Saturday afternoon, a drop from the estimated 2,000 who congregated last weekend. At different points, groups of demonstrators attempted to veer off the agreed route, but police moved quickly to regain control, with extra officers deployed to block the road and water cannon used. In response, some protestors threw bottles and fireworks.

Another protest against Luxembourg’s CovidCheck system is scheduled for Sunday afternoon, the Silent White March (Marche blanche silencieuse), under the same conditions as Saturday’s demonstration. Rallies by the group have taken place every fortnight since September, and to date have been peaceful.

Amnesty International on Thursday cancelled a march it had planned this weekend, blaming last weekend’s upheaval, saying it had seen its “right to expression” compromised by “other groups and individuals” plotting to “take advantage” of the march to voice their own beliefs.

No injuries were reported last weekend but there was minor property damage as a result of the protest, Internal Security Minister Henri Kox said.

Police guard the entrance to the Christmas market

Luxembourg City does not hold the power to put a complete ban on protests, Mayor Lydie Polfer said on Thursday, citing article 25 of the the country’s constitution, which gives the right to any individual to protest peacefully.

Luxembourg this week recorded more people with confirmed Covid-19 cases than it has seen since the worst crest of the pandemic at this time last year, according to data released by the health ministry on Wednesday.

Testing identified 666 people infected with the virus causing the disease, with the unvaccinated being twice as likely to contract Covid-19, health officials said.

Two public petitions, one urging the ending of the CovidCheck scheme for entry to private companies or public institutions and the second seeking a referendum on its use, both gained enough support last week to be debated in parliament.