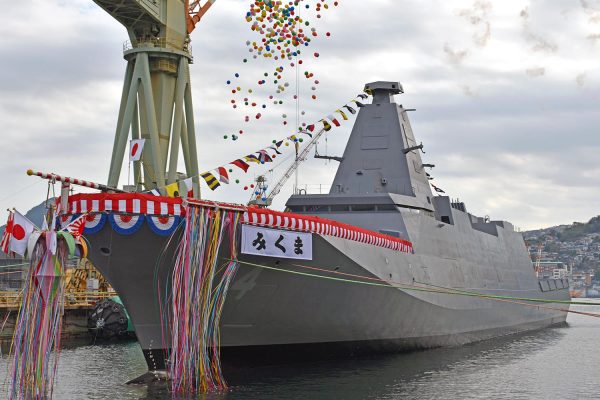 MHI launched Mikuma, the fourth Mogami-class frigate on order for the Japan Maritime Self-Defense Force (JMSDF), in a ceremony held on December 10 at its facilities in Nagasaki.

Named Mikuma, the 133 meter-long vessel (pennant number FFM-4) entered the water in a ceremony held on December 10 at the company’s Nagasaki Shipyard & Machinery Works in Nagasaki Prefecture, and is expected to enter JMSDF service in March 2023.

As neighboring China expands the size and capabilities of its naval forces, Japan plans to defend the southwestern Nansei Islands, including the disputed Senkaku/Diaoyu Islands in the East China Sea, by boosting its patrol activities. The Senkaku/Diaoyu Islands are controlled by Japan but also claimed by China and Taiwan.

Equipped with compact hulls, JS Mikuma is being built for about 47.6 billion yen ($419 million) under a contract awarded in January 2020, according to an MHI press release. As with the other ships of the class, the 3,900-tonne vessel will have a crew complement of about 90, a beam of 16.3 m, and a hull draught of 9 m.

A JMSDF spokesperson told Janes the new frigate class will require fewer crewmembers and that, compared with other frigate classes, construction costs will be lower due to its compact size.

Powered by a combined diesel and gas (CODAG) propulsion system featuring two MAN 12V28/33D STC diesel engines and one Rolls-Royce MT30 gas turbine, the Mogami-class warships are expected to be capable of attaining a top speed of more than 30 knots.

Armament on the frigates is expected to include the navalized version of the Type-03 (also known as the Chū-SAM Kai) medium-range, surface-to-air missile, a 5-inch (127 mm)/62-calibre gun, canister-launched anti-ship missiles, and a SeaRAM close-in weapon system that is expected to use upgraded RIM-116C Rolling Airframe Missiles.

The ships will also be equipped with a vertical launch system (VLS) and an unmanned surface vehicle (USV), both of which will see the first installment by any Japanese frigate ever.

Most recently, the Ministry of Defense in Tokyo secured 8.4 billion yen to acquire the vertical launch system for two 3,900 ton-class multirole frigates for the JMSDF in the fiscal 2021 supplementary budget approved by the cabinet of Japanese Prime Minister Kishida Fumio on November 26.

The frigates, each of which will be capable of embarking one helicopter as well as an unmanned underwater vehicle, will also be equipped with variable depth sonar and towed array sonar systems for anti-submarine warfare operations.

According to the JMSDF, this new frigate class, which is intended for surveillance missions in waters surrounding the Japanese archipelago, including the East China Sea, will be equipped with enhanced multirole capabilities, including the ability to conduct anti-mine warfare operations, which until now have been performed by the JMSDF’s ocean-going minesweepers.

The JMSDF spokesman said Tokyo plans to build 10 ships of the class under its Mid-Term Defense Program (MTDP) for fiscal years 2019–23, which was approved in December 2018. The service has plans to eventually field a total of 22 such frigates.

Japan’s current National Defense Program Guidelines, which were also approved in December 2018, require Tokyo to maintain a destroyer fleet of 54 vessels, including eight Aegis-equipped destroyers, and a submarine fleet of 22 boats. As of March 31, 2021, the JMSDF had 47 destroyers and 21 submarines.