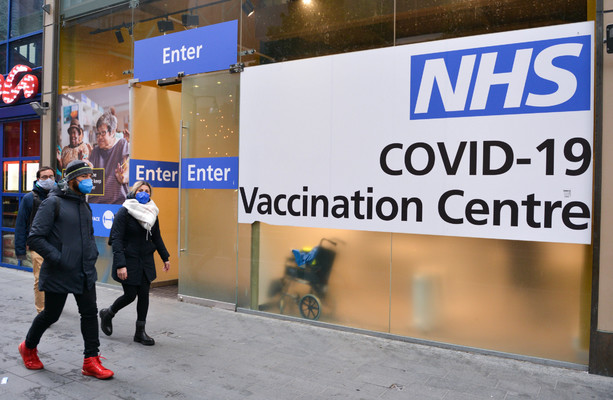 A MEMBER OF the Scientific Advisory Group for Emergencies (Sage) has said Omicron is “much more infectious” than Delta and all previous strains.

“What we can also see is that the vaccine, two doses of the vaccine, has relatively little impact on stopping that transmission.

“So putting those two together, and the fact that it’s already increasing, doubling every two or three days, what we can be pretty sure of is a very, very large wave of infections, bigger than the waves of infections that we’ve had before, so really the uncertainty is in how that’s going to translate into hospitalisations and deaths.”

Hayward said the hospital system is already “on its knees” and there is a “big problem” ahead.

It was put to him that people may think ministers feel they have to put extra restrictions in place “based on modelling and theories”. He said: “There’s a very, very strong theoretical possibility here. It’s not just an off-chance that we’re talking about.

“And certainly we’re talking about a hospital system that is already pretty much on its knees with the current level of activity, and that level of activity is going to go up dramatically and much worse than a normal winter.

“So you know, there is going to be a big problem. The question is how much we’re prepared to do to stop that as a society.”

Dr Susan Hopkins, the chief medical adviser for the UK Health Security Agency (UKHSA), said people will have to reduce social contact as much as possible, adding that lateral flow tests should be used before going out to meet anyone.

Her remarks came as Education Secretary Nadhim Zahawi said the UK is in a “race” to get the Covid-19 booster to eligible adults “as quickly as possible”.

Zahawi said there are people in hospital with Omicron, while Dr Hopkins also confirmed that they are getting reports of individuals going into hospital over the last few days with the variant.

He said Prime Minister Boris Johnson will be saying more about the booster programme “later today”.

Hopkins told BBC’s The Andrew Marr Show: “We’re also seeing hospitals diagnose more and more people coming through their emergency departments, and we expect to see increases in that number. I have not had a report of death yet.


“But it’s really important to remember it is just over two weeks since we first detected the cases in the United Kingdom, and that hospitalisations start to be seen in about two weeks and deaths usually at three to four weeks.

“I think it’s too early to make any assumptions at this point in time.”

Mr Zahawi told Sky News’ Trevor Phillips On Sunday programme: “It is now a race between the booster and that protection, and the Omicron variant.”

Asked what action is likely to be taken to increase the rate of booster jabs, Mr Zahawi said: “There is absolutely a plan, and the Prime Minister will be saying more on this.”

Mentioning that the booster programme has been opened to those over the age of 30 and that a team of GPs, pharmacies, the military and volunteers is being mobilised, he added: “We are over 20 million (booster jabs) already.

“We are now in a race to get all adults who are eligible for their booster jab to be boostered as quickly as possible, and the Prime Minister will be saying more about this later today.”