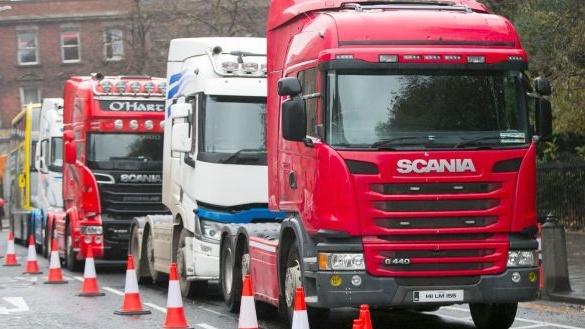 Protestors claiming to represent the views of the “free people of rural Ireland & Irish farmers” are expected to take the streets on Sunday, December 12th in Dublin, according to a number of social media posts.

The demonstration, which is being publicised across Facebook, comes ahead of the planned large-scale 24-hour trucker protest scheduled for Dublin city centre on Monday in response to petrol and diesel prices reaching a record high.

Organisers of Sunday’s protest, which also claims to represent Irish farmers, posted on social media that they would continue 24/7 “until there is real resolve from our government about the price of fuel & energy costs aswell many other issues”

In a post which was copied and shared across a number of Facebook accounts, organisers of Sunday’s protest said the event would kick off at 2pm in Dublin and that protestors would stand against “the continuous ignoring of the crucial needs of people of Ireland & people’s civil liberties by the present sitting government”.

It remains unclear where in the capital city the protestors are planning to gather with posts stating that there would be “more details to follow”.

The shared Facebook post is signed by “the individual farmers protest group of Ireland & people of rural Ireland” and also tagged the Irish Truckers & Haulage Association Against Fuel Prices which is holding Monday’s protest.

A spokesman for the Gardaí said they are aware of a “potential planned protest” that is due to take place on Sunday.

“An Garda Síochána will have an appropriate and proportionate plan in place to police this protest,” the spokesman said.

The gardaí have also put in place a policing plan ahead of Monday’s protest which will see large numbers of heavy vehicles arriving on the capital and shutting down roads.

Monday’s protest organisers said there will be “massive convoys” from counties Cork, Galway, Donegal, Monaghan and Wexford, with “thousands of vehicles joining the protest from all corners of the country”.

The group has called on members of the public, the people of rural Ireland, taxi drivers and bus operators to join in. Farmers are also planning to join the protest, starting with the overnight demonstration on Sunday, according to the association’s Facebook page.

In a post on Facebook, the group set up meeting points at service stations, retail parks, and restaurants along the main motorways into the capital, with most convoys being en route to Dublin by 7am.

A similar protest organised by the group last month caused major traffic disruption as truckers engaged in a rolling blockade along the M50.

The group is not affiliated with the Irish Road Haulage Association (IRHA) and has yet to put a spokesperson forward.

It is understood the group have not engaged with the Garda ahead of Monday’s event. Protests in Ireland do not require official permission but the Garda encourages organisers to liaise with it in order to minimise disruption and ensure safety.

Garda headquarters said it is aware of the planned protest, which is mainly being organised on social media, and that it will have “an appropriate and proportionate plan in place to police this protest”.

Retail representatives have criticised the planned protest, which they say will “imperil livelihoods at a time when every trading day counts”.

This follows complaints that last month’s protest caused people to miss medical appointments and that truckers were blowing their horns outside Holles Street Maternity Hospital.

It is understood a Garda Public Order Unit will also be on standby and operating in the background during the protest, along with a garda tactical advisor. Sources said this is in case anti-vaccination protesters attempt to hijack the demonstration.