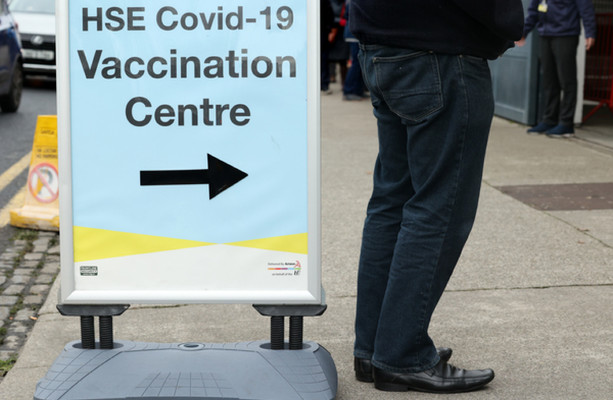 AS THOUSANDS OF people are administered an additional Covid-19 vaccine, there have been conflicting messages this week with questions over the public’s enthusiasm for boosters standing in contrast to long queues of people forming to get one.

Taoiseach Micheál Martin was among TDs and health officials who indicated that there may be less impetus among people to obtain a booster vaccine compared to the initial rollout.

“The same urgency doesn’t seem to be there in terms of availing of the option to take the booster as was when we were offered the first dose and the second dose,” Martin said in the Dáil this week.

“It does work. The booster will have a really significant impact. I can’t stress that enough,” he said.

“That’s the one message I want to get across today, above and beyond everything else to do with Covid-19. Please take your booster.”

HSE chief executive Paul Reid also said previously that the health service was “seeing people not coming forward for a high number of appointments made”.

“Maybe just due to a sense of security among people feeling they have had two vaccines and don’t need a booster, but we do know it’s really important for people to come forward,” Reid said in November.

“The more people receive these booster shots when there are due for you, the smaller the number of people we expect to see in hospitals.”

Their comments came after a significant number of appointments at vaccine centres were not attended.

However, this is partly due to communication lags between the HSE, which operates vaccine centres, and GPs and pharmacies who are administering doses to their patients at an individual level, that have meant some people who are already vaccinated have been offered an appointment they no longer need at a centre.

With all of that, is there any evidence that people are less enthusiastic about the booster?

More than one million booster vaccines have already been administered in Ireland, which includes 94,000 vaccines for people who are immunocompromised and 975,000 for those in the age groups that have been allowed to come forward.

The number of boosters given in a week jumped from around 57,000 to 150,000 a month ago when the programme was expanded to cover additional age groups.

Since then the figure has continued to rise, with nearly 200,000 doses in each of the last two weeks.

And the enthusiasm was apparent on Thursday, when hundreds of people queued outside walk-in centres in Dublin, where UCD and Croke Park reached capacity and had to turn people away before lunchtime.

During the week of 22 November, 208,000 appointments were offered in vaccine centres and around 80,000 attended for their slot, according to the Taoiseach.

That prompted comments by the Taoiseach in the Dáil, where he questioned the public’s appetite for getting another dose of Covid-19 vaccine.

A HSE spokesperson, in a statement to The Journal, said that it is taking longer for people to attend appointments for their booster vaccine.

But the long queues in Dublin reflect a wider enthusiasm among the public to get a booster, with official surveys supporting this.

Around 80% of people are confident they will say yes to a booster vaccine, according to research by the Economic and Social Research Institute.

Speaking to The Journal, Head of the ESRI’s Behavioural Research Unit Professor Pete Lunn said that figure is less than the 93% of people who are currently fully vaccinated.

But he explained that although there a number of people aren’t sure about getting a booster, the initial vaccine rollout earlier this year saw most people who said they weren’t sure initially change their mind.

“It is true that the survey responses we are getting don’t match a story that says everybody that’s fully vaccinated is saying yes, I’ll take the booster. It’s short of that, but not massively short,” Professor Lunn said.

“Some of the issues with the booster rollout may be due to public acceptance or attitudes, but I think it’s only a small amount judging by that data,” he said.

Lunn said one possibility is that people who received a vaccine earlier in the year feel less at risk from Covid-19 than they did when they had no vaccine.

“Compared to getting your first and second dose, the third dose, which is extremely important from a public health point of view, some people may feel already that they are better protected than they were when they had no doses so there may be less of a sense of urgency because of that,” he said.

The problem with that from a public health point of view is it may be that the message has not sufficiently got through to people that their immunity wanes and how quickly it wanes from the vaccine.

“One of the things that we know from all the work we’ve done is that vaccine hesitancy is very closely related to how strongly you follow the news. Our strongest predictor of whether someone is willing to take the vaccine is how closely they follow Covid-19 news,” he explained.

“Now, it may be that people who are being hesitant about a booster have not absorbed that message of how quickly immunity does seem to fade and how important the booster is.

“It’s really important that we get the benefits of the booster across and we make that case clear to people. It may be if we do that more, we can get that 80, 81% up higher.”

And despite his comments last week,  the HSE’s Paul Reid said on Thursday that “vaccine hesitancy” is not stalling the rollout of the Covid-19 vaccine booster programme.

He put logistical challenges down to “people with multiple options, trying to fit that into their lives and the other demands they have”.

Reid said that the first groups to be given booster vaccines – people living in long-term care facilities and over-70s – were the most complex, but that he would expect to uptake and demand to be smoother as the programme works through other cohorts. 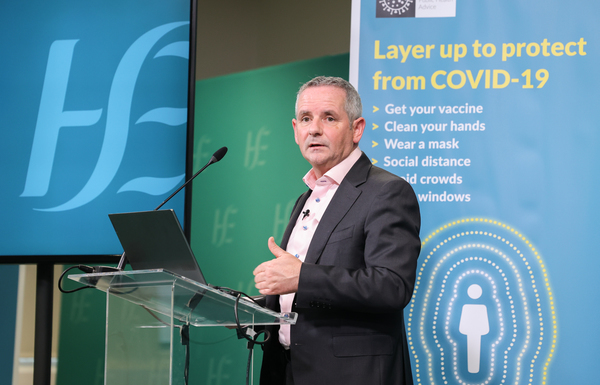 Paul Reid at the HSE briefing

“As we move down through the ages, we’ve always been confident we’ll see a much stronger demand, push factor coming forward and that’s exactly what we’re seeing even today.

For the 60 to 69-year-olds, it was a bit more difficult because on a smaller percentage of those in the first couple of weeks were eligible, because a lot of those would have been done less than five months ago, so there was some complexity about it.

But I would never put any of this down to hesitancy at all. We are not seeing vaccine hesitancy, on the contrary. But what we are seeing is multiple channels, people with multiple options, trying to fit that into their lives and the other demands they have.

Also at the HSE briefing on Thursday, Damien McCallion, who leads the vaccination programme, said the system has to balance appointments, which are particularly prioritised for medically vulnerable people, and walk-ins.

“Clearly, we will look to have longer walk-in clinics to deal with some of the issues that came up this morning,” McCallion said.

The Taoiseach was prompted to clarify the remarks he had made in the Dáil.

Speaking to reporters later on Thursday, Micheál Martin said that the “core point” he was making was that the booster enhances protection against death from Covid-19 and the Omicron variant.

“My point was to try to encourage people… it seems to be the primary weapon we have against Omicron, which we’re all worried about,” he said.

“If you take the booster, you reduce very, very significantly your chances of ending up in hospital or in an ICU.”

At the ESRI, Professor Lunn said that there “might be some people for who Christmas has concentrated the mind” around receiving a vaccine, which could be a contributor to the long queues of people at centres like in UCD.

On a longer-term basis, he said it is “worth bearing in mind as well that although the first vaccines we got up to [a rate of] 93%, when they were first developed and when the vaccine rollout was starting, support for the vaccines was not at 90%, it was back down around 80% with a lot of ‘don’t knows’”.

“Then, over a period of months, support for the vaccine steadily increased. It took time to persuade the ‘don’t knows’ and from our data it looks like the large majority of people who began as don’t knows ended up being fully vaccinated,” he said.

“There’s a job to do again as we start to roll the boosters out – there’s a situation where there is a proportion of don’t knows who are going to need to be persuaded to turn into ‘yeses’, and that’s why it’s so important to get how essential the booster is across to them and get the benefits across.”