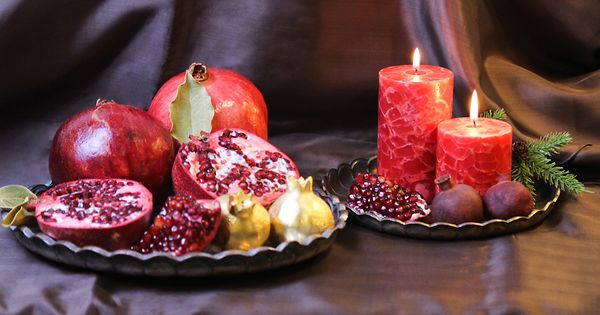 Kleeschen may have come, but for many foreign residents who have settled in Luxembourg, the festive traditions of their home countries are still an important part of winter celebrations – even if some of those take place in June.

Four woman living in the Grand Duchy share details about their traditions from Sweden, Iran, Venezuela and Brazil.

In Sweden, the shortest day of the year is thought to be 13 December (based on the Julian calendar), says Oona Verhaegen. It is when Swedes celebrate St Lucia day.

The saint visits hospitals, schools and businesses, handing out S-shaped saffron buns called Lussekatt. “It’s dark at this time of year in Sweden, so Santa Lucia wears a crown of candles on her head. She’s followed by others wearing a point hat or a crown of silver or ivy, with candle sticks in their hands, singing Sankta Lucia, which most Swedes know off by heart,” says Verhaegen.

Santa Lucia wears a crown of candles on her head

The followers wear long night gowns with a silver belt, whilst Lucia wears a golden or red belt, symbolising the flames which apparently did not burn her at the stake (she had to be killed by the sword). Verhaegen, who has lived in Luxembourg for five years, explains that it’s a festival of lights for children and grown-ups, which was brought to her home country from Italy. Today, the procession, often broadcast on Swedish TV, includes children sometimes dressed as elves or gingerbread men.

Lucia Day can be traced back to the 4th century, when Lucia of Syracuse brought food to Christians hiding in the Roman catacombs, using a candlelit crown to light her way. Records show that the tradition dates back to 1764 in Sweden, but the procession became more popular at the turn of the 20th century. Santa Lucia Day is also celebrated in Norway, Denmark and the Swedish-speaking areas of Finland.

Iranian, Neda Mosharaf, celebrates Yalda or shab-e-yalda with others in Luxembourg on 21 December. “It’s a festival celebrated on the longest and darkest night of the year. Friends and family normally gather at a grandparent’s house to eat, drink and read poetry, especially Hafez and Shahnameh, until after midnight,” says Mosharaf.

“Reading Hafez poems, making good wishes, and talking and laughing together, gives a warm welcome to winter. And the red colour in this ceremony is to symbolise the glow of life and love,” she adds.

Mosharaf grew up in Germany but has been living in Luxembourg for three years. She explains that the table is filled with pomegranates, watermelon, persimmon or medlar, and dried fruits and nuts, which are the symbols of Yalda night. Red pomegranate represents the glow of life, whilst the last of the summer fruit such as watermelon, or dried fruits, are to say goodbye to autumn and welcome winter.

There are three symbolic festivals and old traditions celebrated in the Zoroastrian community. “Char shanbe soori, the last Wednesday before Nowruz [New Year] is about the fire,” says Mosharaf, adding that jumping over the fire and singing “let your redness be mine, my paleness yours” is symbolic of leaving sickness behind for new health. It’s also the birthday of Mithra, goddess of light.

Venezuelan-born Rebecca de Rodriguez has lived in Luxembourg for a year, and Germany for four years before that. She left her home country in 2016, but celebrates with her family in the greater region on 24 December.

“That night we get together and eat Hallacas, cornflour filled with a thick stew of chicken, pork, beef, wine, and sweet peppers, and decorated with onions, olives, raisins, bacon and eggs, individually wrapped in smoked plantain leaves,” she explains.

The Hallacas are eaten with a salad of chopped carrots, potatoes, green beans, shredded chicken and apple, plus other delicacies including pork leg with apple gravy, ham bread (filled with ham, bacon, olives and raisins), all washed down with rum eggnog.

“As for gifts, all children will receive a present from the baby Jesus which they can open at midnight, at the time he was born. Older people exchange gifts, and then on 25 December, we eat all the leftovers with other family members,” says de Rodriguez.

Hallacas are rumoured to be a meal prepared by slaves from Africa and indigenous South American people, made from what was left when the Spanish conquerors had finished their meals. “They used cornflour to wrap all the food,” explains de Rodriguez adding: “I’ve made this huge meal for North Americans and Germans and they’ve enjoyed the interesting mix of ingredients.”

Further south in Brazil, Paula Gastal says that whilst Carnival is the premier celebration for her country, Sao Joao, celebrated in June, kicks off the winter solstice in the southern hemisphere, in a very different way.

“The festivity was introduced to Brazil by the Portuguese whilst it was still a colony, and celebrates the birth of the saint of that name on 24 June, which also coincides with the winter solstice,” she explains.

Gastal says that Brazil’s melting pot culture means the “Festa de Sao Joao” has many local and regional characteristics, but is essentially about getting the community together. “It’s a week-long tour of the parties in your town, or even in other villages. People head to the arraial which is what we call the place we gather to celebrate Sao Joao.”

“We eat, dance, and play. Food is either brought by people or sold at stands, and celebrates the crops, such as pipoca, the indigenous word for popcorn, or nut-based recipes such as pe de moleque, a super-hard caramel with peanuts inside, and pinhao from Araucaria, the pine trees found in the south of Brazil,” says Gastal.

Like Luxembourg, hot wine is the typical drink, and towns are decorated with colourful triangular flags and paper balls. “Also similar to the local kiermes, there are stands with games such as barraca do beijo where you either get a kiss on the cheek or get sent to prison. There is always a fire, and the quadrilha is a dance and play at the same time, which imitates a wedding to celebrate Santo Antonio, the equivalent of cupid. It’s a bit of nonsense, but it’s all about the Brazilian spirit of play and the simple life,” says Gastal.

Music is a special feature of this celebration and in the northeast of the country takes the form of Forro, whilst in the south Vanerao, both types of music encouraging couples to dance into the night. “In the south, men dress as gauchos and ladies as prendas, whilst in the northeast region, the traditional week-long festivals culminate in a firework display on 23 June.”

In pre-pandemic years, the Brazilian community in Luxembourg held a Festa de Sao Joao for children, supported by the Maria Bonita restaurant in Clausen, which Gastal hopes will take place once more in 2022.