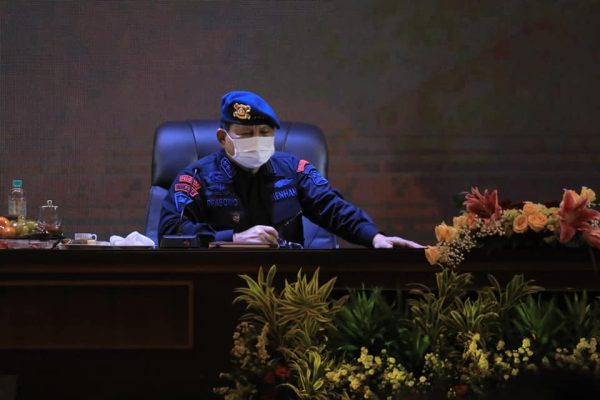 Given Indonesian President Joko “Jokowi” Widodo’s apparent lack of interest in foreign affairs, an interesting question arises: who is the mind behind the country’s current diplomatic approach? The process of democratization since the fall of Suharto in 1998 has had a significant impact on the making of Indonesian foreign policy, making it more inclusive and open to public scrutiny. As a result, foreign policy is not exclusively determined and executed by Ministry of Foreign Affairs and the standing minister.

Especially under Jokowi’s leadership since his election in 2014, foreign policy has substantially simplified and narrowed, to focus more on practical issues such as trade and investment partnerships, infrastructure development funding, and the maritime economy. This marks a shift away from the country’s “traditional” form of diplomacy, based on active global and regional political leadership, as emphasized by Jokowi’s predecessor Susilo Bambang Yudhoyono. I argue that these changes have furthered the trend prompted by Indonesia’s democratization, giving more individuals a say in the process of formulating the nation’s foreign policy.

In fact, Jokowi has employed more individuals to support him in managing the country’s international engagement than his predecessor. Indonesia has no specific council on foreign policy nor a dedicated unit on foreign affairs inside the Presidential Palace. Yet some prominent figures have emerged – among them Foreign Minister Retno Marsudi, Coordinating Minister for Maritime Affairs and Investment Luhut Pandjaitan, and Defense Minister Prabowo Subianto – who have exercised a heavy influence on Indonesia’s foreign policy over the past few years. The role of Retno and Luhut in shaping Indonesia’s foreign policy, particularly its economic diplomacy, has been well recognized. But Prabowo’s view on the nation’s foreign policy, and his contributions towards it, are underexplored and thus worth reviewing.

Aside from Retno, Prabowo is the member of Jokowi’s cabinet who has most frequently engaged with his  counterparts abroad. He has undertaken overseas visits to many of Indonesia’s strategic partners, and his official speeches are highly anticipated as signals of the current and future trajectory of Indonesia’s foreign policy.

In his recent speech at the Manama Dialogue 2021 held in November, Prabowo conveyed his views on Indonesia’s regional and global foreign policy priorities, featuring strategic defense as its major emphasis. Most interestingly, he outlined Indonesia’s desire to maintain an equal distance from and friendship with the superpowers, while also admitting the difficulties that Indonesia faces in hewing to its traditional position of non-alignment. Prabowo also strongly endorsed the importance of a multilateral approach in overcoming an array of strategic challenges. In particular, he praised the Association of Southeast Asian Nations (ASEAN) for being able to secure peace and manage tensions among the states of the region.

However, Prabowo acknowledged that the Indo-Pacific region is facing greater geopolitical tensions and that the dynamics are in many ways unprecedented. He described Indonesia as a nation that respects all powers: the United States as the preeminent power and China as a rising global power. Thus, he argued that competition between Beijing and Washington is not a zero-sum game and that Indonesia will continue to seek a stronger partnership with both. Hence his focus on Indonesia’s strategic defense and his reaffirmation of the nation’s commitment to refrain from expansionism.

As foreign policy becomes more complex, due to digital technology and an increase in global economic interconnectedness, the nature of Indonesia’s international engagement has also been affected. For instance, despite the growing economic and investment partnership between Indonesia and China, the two nations are currently engaged in a standoff over the oil and gas deposits near the Natuna Islands. China’s government reportedly sent letters of protest to Indonesia, demanding that it halt its drilling in the area. The territorial friction poses a definite risk to the two countries’ close ties.

In responding to this situation, Prabowo may have a greater legitimacy than other ministers, however the decision to answer China’s concern likely required thorough conversations with other economic-related figures. The response then may be similar to what happened with the debate over China’s Belt and Road Initiative (BRI) in Indonesia. Jokowi’s administration has tended to draw a clear line between economic cooperation and political ties. In this case, Indonesia moves BRI forward as solely economic ties, without any purpose to associate it with geopolitical and political agenda – at least not publicly. As a result, key leaders have on many occasions emphasized that BRI will not make Indonesia dependent on China.

Days before China’s protest to Indonesia was revealed, Prabowo virtually met with China’s Defense Minister Wei Fenghe. The two ministers stated that both nations are working together in opposing hegemonism and jointly safeguarding peace and security in the region. At the same time, Prabowo reiterated that Indonesia and China are friendly neighbors. But these lines will be just normative statements if the problem over the Natuna Sea is not solved immediately.

Another relevant issue is AUKUS, the security partnership announced by the U.S., United Kingdom, and Australia in September. Prabowo’s reaction to the agreement was surprisingly mild compared to that of Foreign Minister Retno. While the Indonesian Foreign Ministry raised its concerns that AUKUS could contribute to the region’s arms race, Prabowo was much more pragmatic. He said that he respected the AUKUS pact as Australia’s way of protecting its national interests and security from outside threats.

The gap between these two responses may confuse international observers and stakeholders as to Indonesia’s true stance, and in engaging with some foreign counterparts, they have demonstrated a certain puzzlement in their dealings with Indonesia’s foreign policymakers. Though some may see this as conferring a beneficial strategic ambiguity, Indonesia should take steps to unify its policymaking process across ministries. The model of the 2+2 Ministerial Dialogue meeting is a notable scheme that integrates two sectoral interests into one unified position. Australia and Indonesia offer a good example on how the seven rounds of 2+2 meetings have helped the two states to manage their Comprehensive Strategic Partnership.

For observers of Indonesia’s foreign policy, Prabowo is generally seen to exercise a strong influence on the nature of the country’s international engagement. Understanding his views on regional and global issues will therefore help us to apprehend Indonesia’s future foreign policy decisions. Recently, Prabowo was publicly seen interacting with Israel’s top diplomat in Bahrain, which prompted speculation about a possible transformation of Indonesia-Israel relations.