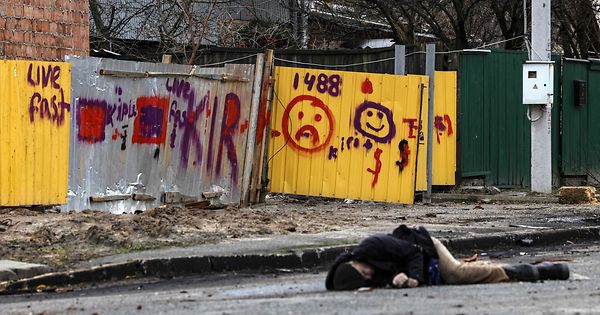 Ukraine has accused Russian soldiers of killing unarmed civilians in the town of Bucha, north of Kyiv

Ukraine has accused Russian soldiers of killing unarmed civilians in the town of Bucha, north of Kyiv

The bodies of at least 20 men in civilian clothes were found lying in a single street on Saturday after Ukrainian forces retook the town of Bucha near Kyiv from Russian troops, AFP journalists said

Some European Union governments are pushing for the bloc to quickly impose new sanctions in response to multiple reports that Russian troops executed unarmed civilians in Ukrainian towns, according to diplomats familiar with the discussions.

The European Commission was already honing measures that would mostly focus on closing loopholes, strengthening existing actions – such as export controls on technology goods and fully sanctioning banks already cut off from the SWIFT global payments system – and expanding the list of sanctioned individuals.

Some EU nations argue there is now a trigger for even more penalties to be put in place with speed, with Ukrainian officials reporting evidence of war crimes committed by Russian troops in northern areas, according to a diplomat familiar with the discussions.

There is not yet consensus on all the details for a new package, or when to implement it, even as the bloc’s executive arm seeks in the meantime to put forward a set of corrective measures as early as this week. A small number of member states, including Germany, are opposed to sanctioning Russia’s energy sector, its maritime trade and other key industries, and EU sanctions require unanimous support.

The question for EU members is what actions would spur a fresh and fuller set of sanctions. Some continue to argue such measures should only be explored if Russia were to use chemical weapons or capture a major city, three diplomats said, asking not to be identified as the discussions are private.

Other states say the reported events in places like Bucha, a town on the outskirts of Kyiv, are enough to warrant action. One of the diplomats said even the fresh measures on the table were not enough given the extent of the potential war crimes. Countries like France and Germany were quick to condemn the reported actions in Bucha, while Estonia’s Prime Minister Kaja Kallas said a fifth around of “strong EU sanctions” should come as soon as possible.

Ukraine has accused Russian soldiers of killing unarmed civilians, with officials saying they found hundreds of bodies in Bucha after Russian troops left. Mykhailo Podolyak, an adviser to President Volodymyr Zelenskiy, posted several photos on Twitter of dead people, some with their hands tied behind their backs. Moscow has not commented on the accusation so far. The Kremlin has said previously it was only targeting the military and key infrastructure.

Zelenskiy renewed charges that Russia is committing genocide in Ukraine, telling CBS’s “Face the Nation” his citizens “are being destroyed and exterminated.”

German Foreign Minister Annalena Baerbock said in a Twitter post Sunday that anyone responsible for war crimes must be held accountable and sanctions would be tightened against Russia. Chancellor Olaf Scholz demanded access for organisations like the International Red Cross to document what happened in Bucha, according to a statement from his office Sunday.

It comes as Russia shifts tactics in the war, redeploying troops away from the north after weeks of failure to make ground. Instead its campaign is focusing on areas in the east, including the Donetsk and Luhansk regions of Donbas, and Mariupol, a port city that has already been under siege for weeks.

“The cases we documented amount to unspeakable, deliberate cruelty and violence against Ukrainian civilians,” said Hugh Williamson, Europe and Central Asia director at Human Rights Watch. “Rape, murder, and other violent acts against people in the Russian forces’ custody should be investigated as war crimes.”

“We are still collecting bodies, uncovering graves, but the count is already in hundreds,” he told the U.K’s Times Radio in an interview. On Twitter he again called for a full oil and gas embargo of Russia by Group of Seven nations and for ports to be closed to all Russian vessels and goods.

The U.S. last month made a formal determination that Russian troops had committed war crimes. At the time Secretary of State Antony Blinken said the U.S. had seen “credible reports of indiscriminate attacks and attacks deliberately targeting civilians, as well as other atrocities.” President Joe Biden has said he considers Vladimir Putin a war criminal.

Increasingly frustrated with the stance of their counterparts, several EU countries, including Lithuania and Poland, have announced they will unilaterally stop importing Russian energy, while Estonia has put forward a proposal to withhold and freeze a share of Russia’s energy revenue that it says could be an initial compromise.

One of the diplomats said it was hoped that the unilateral moves would lead to an agreement among all member states to do more in order to avoid risking damage to the EU’s united front.