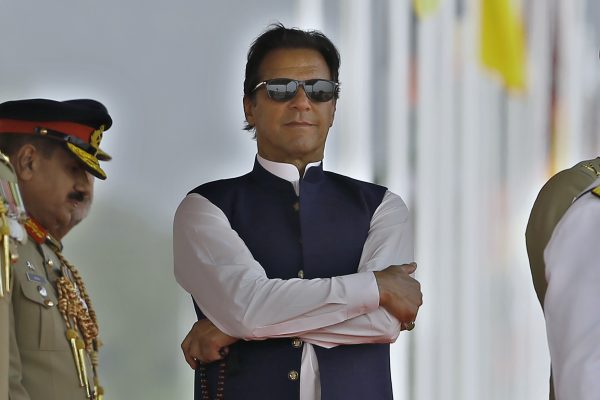 Pakistan’s embattled Prime Minister Imran Khan remained defiant Thursday, telling the nation he won’t resign even as he faces a no-confidence vote in parliament and the country’s opposition says it has the numbers to push him out.

Besieged by the opposition and abandoned by coalition partners, Khan is battling for his political survival after the opposition called the vote, which is expected to take place on Sunday.

The opposition accuses him of economic mismanagement and claims he is unfit for the role of prime minister. A parliament session that was to debate his role was adjourned on Thursday within minutes of opening and without any explanation.

Lawmakers are reportedly to reconvene on Sunday for a debate and vote on Khan — which could now be a formality since a series of defections appear to have given Khan’s political opponents the 172 votes in the 342-seat house to push him out.

Earlier on Thursday, the leader of a key opposition party, Bilawal Bhutto, urged Khan to resign. “You have lost… You have only one option: Resign,” Bhutto said.

But in a video address to the nation late Thursday, Khan struck a defiant tone.

“I will not resign,” said the former cricket star turned politician and added, invoking a cricket analogy: “I will fight until the last ball.”

In his speech, Khan lashed out at the United States, claiming Washington had conspired with the Pakistani opposition against him and that America wants “me, personally, gone … and everything would be forgiven.”

He claimed that Washington opposed his relentless criticism of the U.S. war on terror — “and not a single Pakistani was involved in the 9/11 attacks” — as well as drone attacks in Pakistan and his refusal to agree to allow Pakistan to be used for “over-the-horizon” U.S. missions against terror targets in what is now a Taliban-ruled Afghanistan.

As for Washington’s dismay at Khan’s visit to Russia on February 24, hours after Russian tanks rolled into Ukraine, Khan said that underscored U.S. attempts to control Pakistan’s foreign policy,

Khan came to power in 2018, promising to rid Pakistan of corruption even as he partnered with some of the country’s tainted old guard. He called them “electables” — necessary to win elections because their wealth and vast land holdings guaranteed votes in large swaths of the country.

In politics, Khan has espoused a more conservative brand of Islam. He has also kept company with radical clerics, including Maulana Tariq Jameel, who once said that women in short skirts had caused the COVID-19 epidemic.

Still, Khan is credited with building the country’s foreign reserves, now over $18 billion. Remittances from Pakistanis living overseas amounted to a whopping $29 billion in 2021, despite the economic downturn caused by the pandemic.

Khan’s reputation for fighting corruption has encouraged Pakistanis to send money home and he has also cracked down on the unofficial money transfer system, known as Hawala. However, the opposition blames him for high inflation and a weak Pakistani rupee.

His handling of the coronavirus pandemic brought him international praise. His implementation of so-called “smart” lockdowns that targeted heavily infected areas — rather than a nationwide shutdown — kept some of the country’s key industries such as construction afloat.

Khan’s often-stated opposition to Washington’s “war in terror” and the U.S.-led invasion of Afghanistan has brought him popularity at home.

He has tried to reach out to Afghanistan’s new Taliban rulers, fostered close ties to China and Russia, and abstained from the U.N. Security Council vote condemning Russian for invading Ukraine. Still, Khan has denounced the war and called Ukraine’s President Volodymyr Zelenskyy this week in support. The two reportedly spoke for 40 minutes.

Madiha Afzal, a fellow at the Washington-based Brookings Institution, blamed Khan’s political woes on his confrontational style and a cooling of relations between him and the powerful military, widely reported to have assisted Khan’s election victory in 2018.

Pakistan’s army has been the country’s de facto ruler more than half of its 75-year history — even when governments are democratically elected, the military maintains considerable control from behind the scenes, despite their claims of neutrality.

In a Brookings Institution podcast, Afzal said it’s rare for a Pakistani political leader to finish his term. “This is part of a much larger, longer cycle that reflects on Pakistan’s built-in political instability,” she said.

“Essentially, opposition parties don’t wait for elections to occur, for the previous party to be voted out, or for the prime ministers to be ousted from power,” Afzal added. “While the military says that it is neutral in this situation, in this political crisis, what many read that as saying is that the military has basically withdrawn its support from Khan.”