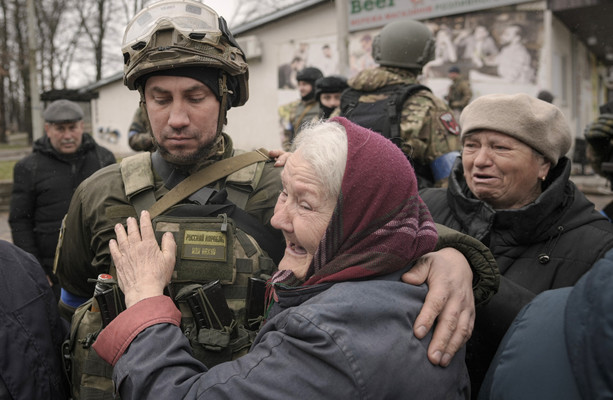 REPORTERS WHO HAVE re-entered a suburb of Kyiv which was until recently under Russian control have described seeing the bodies of civilians strewn throughout the town’s streets.

A journalist with the AFP news agency in Bucha, a north-western suburb of Ukrainian capital, reported seeing at least 20 bodies wearing civilian clothing, including one man with his hands tied behind his back.

Images shared by Ukraine’s defence ministry and the Kyiv Independent newspaper also appeared to show bodies throughout Bucha’s streets, including multiple people with their hands tied behind their back.

In a post accompanying the images on Twitter, the defence ministry described Bucha as a “new Srebrenica”, a reference to the town where more than 8,000 Bosnian Muslims were massacred in 1995 during the Bosnian War.

“Local civilians were being executed arbitrarily, some with hands tied behind their backs, their bodies scattered in the streets of the city,” the ministry wrote.

The AFP journalist said three of the bodies he saw were beside their fallen bicycles and that a Ukrainian passport was found open beside the body of a man with his hands tied behind his back with a white cloth.

Bucha was closed off from the world for nearly a month after Russia launched its attack on Ukraine in February, and was the scene of fierce battles which helped prevent invading troops from taking Kyiv.

Ukrainian forces regained control of Bucha this week, and the scale of the devastation and violence around the town is becoming apparent following the retreat of Russian forces.

“All these people were shot, killed, in the back of the head,” mayor Anatoly Fedoruk told AFP, adding that the victims included men and women, and that he had seen a 14-year-old boy among the dead.

Many of the bodies had white bandages on them “to show that they were unarmed”, the mayor said.

He also said that another 280 people had been buried in mass graves in the town and that the bodies of ”entire families… children, women, grandmothers, men” still lay in their shot-up vehicles.

He said it was not possible to tell how many civilians had been killed during fighting with Russian forces.

“These are the consequences of Russian occupation,” Fedoruk added.

Ukrainian President Volodymyr Zelenskyy also warned yesterday that retreating Russian troops are creating a “catastrophic” situation by leaving mines around the bodies of those killed, as well as abandoned equipment and homes, booby-trapped with mines.

According to AFP, gaping holes from shell explosions in Bucha can be seen in many buildings, with supermarkets, cafes and houses burned or destroyed and crushed cars lining the streets.

“Bodies lie randomly around the town: outside a railway station, by the side of a road,” a report by the agency reads.

“But the violence that came to this one street appears to be more systematic. The victims, all of whom appeared to be men, are scattered over several hundred metres of debris-strewn tarmac.

“Sixteen of the 20 corpses were lying either on the pavement or by the verge. Three were sprawled in the middle of the road, and another lay on his side in the courtyard of a destroyed house.

“Some lie in groups, like the two men lying face up in a puddle next to each other, one in a green parka and the other in a black jacket.

“Others died alone. The cyclist with orange gloves and a black balaclava lying on his side with his bike on top of him, as if he has fallen and cannot get back up.”

AFP said that all of these individuals were wearing civilian clothes, such as winter coats, jackets, tracksuit tops, jeans or jogging bottoms, and trainers or boots.


Fedoruk told the agency that the corpses are still in the streets because sappers have not worked in the town to clear mines yet, but that this is expected to happen in “three or four days”.

“Regular civilians cannot even imagine the conditions in which they lived during this one month, with artillery, without supply of food and water, without any possibility to get out,” he said.

Ukraine said yesterday that it has regained control of “the whole Kyiv region” after Russian forces withdrew in what appears to be a new focus on the east and south of the country.

However, there have been severe warnings by Ukraine president Volodymr Zelenskyy that the retreating Russian forces were creating “a complete disaster” outside the capital as they leave mines across “the whole territory”.