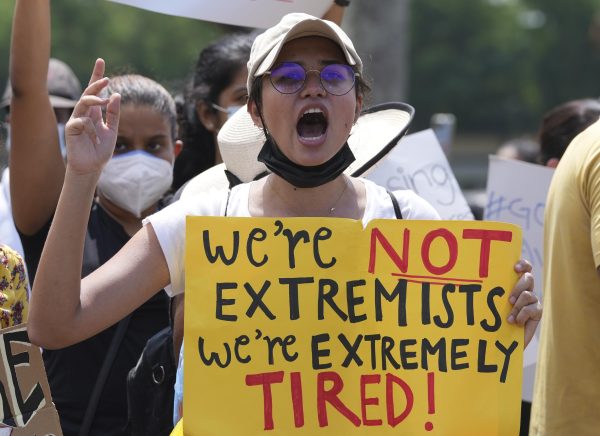 Sri Lanka’s largest opposition party rejected an invitation from the president on Monday to form a unity government, as protests continued throughout the country over its worst economic crisis in memory and deepening mistrust in his leadership.

All 26 Cabinet ministers handed in their resignations Sunday night after thousands of people defied a countrywide state of emergency and curfew and joined street protests denouncing the government.

A statement from President Gotabaya Rajapaksa’s office on Monday said he “invites all political parties represented in the Parliament to come together to accept ministerial portfolios in order to find solutions to this national crisis.”

The president and his older brother, Prime Minister Mahinda Rajapaksa, were continuing to hold onto power, despite their entire politically powerful family being the focus of public ire.

Two other brothers, Finance Minister Basil Rajapaksa and Irrigation Minister Chamal Rajapaksa, were among those who resigned, along with the prime minister’s son, Sports Minister Namal Rajapaksa. Those resignations were seen as an effort to pacify public anger at the Rajapaksas while retaining executive, defense, and law-making powers in the family.

The largest opposition political party, the United People’s Force, or SJB, immediately rejected the president’s proposal of a unity government.

“The people of this country want Gotabaya and the entire Rajapaksa family to go and we can’t go against the people’s will and we can’t work alongside the corrupt,” top SJB official Ranjth Madduma Banadara told The Associated Press.

SJB has 54 lawmakers in the 225-member Parliament. Its rejection of the president’s request is likely to result in continued uncertainty and protests, which were held throughout the country on Monday.

Police used a water cannon to disperse angry protesters who marched toward the Rajapaksa family home in southern Sri Lanka demanding that the ruling family quit.

The president, meanwhile, swore in four temporary Cabinet ministers to continue the main governmental functions of foreign affairs and finance, and to help lead the ruling party’s parliamentary group.

The top official in the Central Bank, who has been accused of economic mismanagement, also resigned on Monday.

As protests grew and calls increased for him to step down, Rajapaksa assumed emergency powers by decree at midnight Friday. The government also declared a countrywide curfew, which was lifted Monday morning.

Sri Lankans, including professionals, students, and families with small children, defied the emergency decree and curfew on Sunday to demand the president’s resignation.

“In this country it is so difficult,” said Inoma Fazil, a fashion designer who brought her 18-month-old daughter to a protest in the Colombo suburb of Rajagiriya on Sunday. “We don’t want to leave the country and go, and we want to give our child a good future, but everyone is stealing our money. So we came here for her and the rest of the children.”

Two new parents joined the rally directly from the hospital with their newborn. They were greeted with cheers by the protesters, who sang the national anthem and waved flags and placards.

For several months, Sri Lankans have endured long lines to buy fuel, cooking gas, foods and medicines, most of which comes from abroad and is paid for in hard currency. The fuel shortage has caused rolling power cuts lasting several hours a day.

The extent of the crisis became clear when Sri Lanka couldn’t pay for imports of basic supplies because of its huge debts and dwindling foreign reserves. The country’s usable foreign reserves are said to be less than $400 million, according to experts, and it has nearly $7 billion in foreign debt obligations for this year alone.

Rajapaksa last month said his government was in talks with the International Monetary Fund and had turned to China and India for loans, and appealed to people to limit their use of fuel and electricity and “extend their support to the country.”

Rajapaksa’s emergency declaration gives him wide powers to protect public order, suppress mutinies, riots, or civil disturbances or for the maintenance of essential supplies. Under the decree, the president can authorize detentions, seizure of property, and search of premises. He can also change or suspend any law except the constitution.