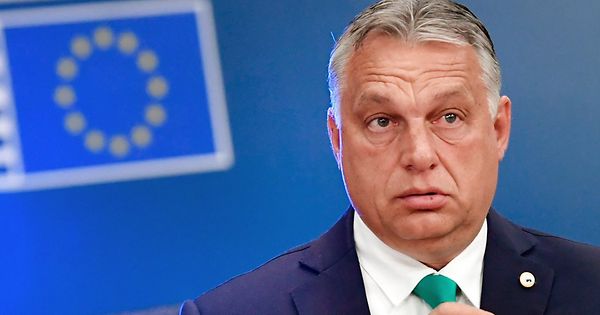 Bloc will “move to next step” after country failed to tackle issues such as corruption, says Commission President Ursula von der Leyen

Bloc will “move to next step” after country failed to tackle issues such as corruption, says Commission President Ursula von der Leyen

The bloc’s executive decided to unleash the so-called conditionality mechanism for reining in nations that violate the EU’s core values after failing to secure necessary changes from Hungary on issues such as corruption, European Commission President Ursula von der Leyen told lawmakers on Tuesday.

“Our conclusion is we have to move on to the next step,” von der Leyen said at the European Parliament in Strasbourg. “We will now send the letter for formal notification to start the conditionality mechanism.”

The forint plunged 2% against the euro following the EU’s announcement, by far the biggest daily currency drop globally.

The move follows Orbán’s crushing election victory on Sunday, when he clinched a fourth consecutive term to extend his run as the EU’s longest-serving premier. Orbán defeated a largely united opposition that had pledged to roll back more than a decade of power consolidation and to restore frayed ties with the EU.

The Hungarian government didn’t immediately respond to a request for comment.

In addition to rule of law concerns, the EU will also continue to withhold the disbursement of more than €7 billion in pandemic recovery funding after Orban’s government failed to ease corruption concerns, von der Leyen said.

“With Hungary we have been very clear the issue is corruption,” von der Leyen told lawmakers.

A ruling from the EU’s top court in February cleared the way for the commission to use its new powers over objections from Poland and Hungary, following years of increasingly bitter disputes with Warsaw and Budapest over the independence of courts, media freedom and LGBTQ rights.

While the EU’s work to build its case against Hungary has been continuing, there’s little chance that Poland will be targeted soon over a lack of adequate proof of the misuse of EU funds.

Rather than use the mechanism on Poland, the commission will continue to use other tools to maintain the pressure on Warsaw and restore the independence of its judiciary system, a senior EU official told Bloomberg on the condition of anonymity because discussions are confidential.

Poland and Hungary are the only two EU states subject to a so-called Article 7 procedure, which could lead to the suspension of their EU voting rights. That process is hampered by the need for unanimity among member states before such a punishment can be meted out.

Poland has taken a more conciliatory stance of late after its simmering feud with the bloc almost reached boiling point in October when the nation’s top tribunal ruled that some EU laws are incompatible with the country’s constitution, undermining a cornerstone of EU membership.

The EU put in place its new budget tool after growing weary of challenges to independence of judges, an erosion of minority rights to the primacy of EU law – a key premise of the bloc’s founding treaty.

The commission in November took an informal first step by sending letters to Poland and Hungary to address accusations that funds provided by the bloc could have been subjected to corruption or fraud, or that the EU’s financial interests are at risk. Both nations sent their answers earlier this year.

The EU’s decision now “triggers a procedure that has specific timelines, so a process is going on now,” von der Leyen added.