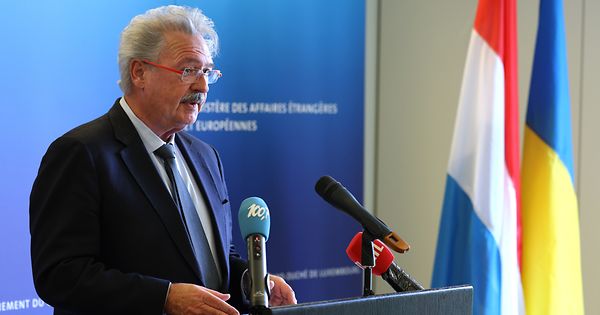 Luxembourg is building a large tent in Kirchberg to accommodate people fleeing the war in Ukraine when they first arrive in the Grand Duchy, replacing the current temporary shelter at LuxExpo.

Refugees were scheduled to move to a warehouse in Contern, to the east of the capital, where around 1,000 people could seek refuge, but the warehouse can not open for safety reasons as refurbishments works were put on hold due to materials shortages, Luxembourg’s Foreign and Immigration Minister Jean Asselborn said at press conference on Monday.

The new tent with up to 500 beds and could be built by Wednesday on the large car park between Avenue John F. Kennedy and Rue Tony Rollmann, next to the building of public radio 100.7.

The refugees currently at LuxExpo were set to move out by Monday next week as it was an emergency structure to deal with the high influx of people, Asselborn said.

Luxembourg has so far granted 1,040 ‘temporary protection statuses’ out of over 4,000 applications, Asselborn said. Those 1,000 people can move to around 17 different accommodation structures, ranging from cultural centres to hotels scattered across the country that the government has readied for refugees.

Of the refugees arriving in the country, 60% are women and girls, and 35% are minors, Asselborn said. The number of Ukrainians applying for protection in Luxembourg after fleeing Russia’s invasion was down last week, Asselborn said, but they could rise again given the images emerging from Ukraine.

In town of Bucha, a suburb of Kyiv, Ukrainians found hundreds of dead bodies and mass graves, pointing to summary executions by Russian invading troops.

Last week, the Grand Duchy received around 300 refugee applications from people fleeing the war in Ukraine, compared to around 1,000 two weeks ago, Asselborn said.

The temporary protection status gives refugees the right to access employment via the country’s job agency for a year, and it could be extended twice for a maximum of three years.

This status is different from the international protection status most refugees from other countries can get, Asselborn said, and it was previously used in the early 2000s for people fleeing the Kosovo during Serbia’s assault.

So far, the country has had no capacity issues at temporary shelters and more structures are set to open in the coming days and weeks, Asselborn said that. Refugees should be treated the same regardless of where they are from, be it Afghanistan, Eritrea, Syria or Ukraine, he added.

There had been reports that some refugees from different countries who were in shelters prior to the Ukraine war had to move to a winter shelter for the homeless to make room for Ukrainian refugees, leading a lawmaker to inquire about the move.