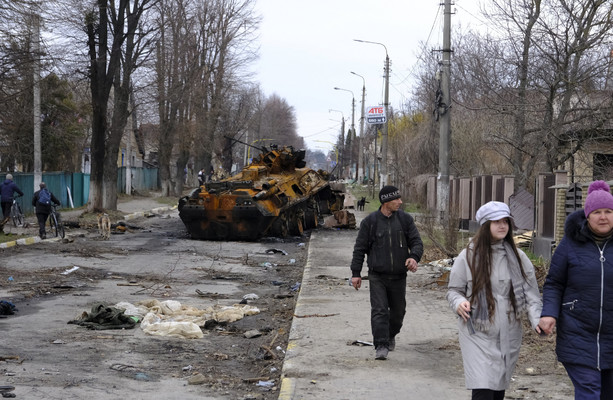 THE UNITED STATES and EU are soon expected to announce tough new sanctions on Russia.

The sanctions come after an outcry over the discovery of dozens of bodies in civilian clothing in areas from which Russian troops have withdrawn around Ukraine’s capital, including the town of Bucha.

Ireland is a member of this council. Zelenskyy will address the Dáil and the Seanad today as he continues his tour of world parliaments.

“They cut off limbs, slashed their throats, women were raped and killed in front of their children,” Zelenskyy said to the UN council.

He demanded stronger action from Western powers and called for Russia’s exclusion from the council, where it holds veto power.

Later in his nightly address, a frustrated Zelenskyy said Russia was blocking the UN from carrying out “the functions for which it was created”.

“The UN Security Council exists, and security in the world doesn’t,” he said.

In an interview with the BBC, the US ambassador to the UN admitted that “no one can question [Zelenskyy’s] frustration with the Council and how the Council operates”.

But she insisted that the Council was holding Russia to account, and that Moscow was isolated within it.

Ireland’s permanent representative to the UN Geraldine Byrne Nason said that any attempts to deny Russian responsibility for the civilian deaths in Bucha “are appalling in their cynicism”.

We here cannot suspend our humanity. The Russian authorities are responsible for these authorities committed while they were in control of the region.

“We call on the Russian Federation to stop this war. To stop destabilising the democratic foundations of the Ukrainian state. It gets harder and harder to say this, but it is not to late to do the right thing.”

A new sanctions package being prepared by Europe is set to include oil and coal, France’s foreign minister said at EU talks in Luxembourg.

The UK said it has so far frozen some $350 billion (€321 billion) in assets from President Vladimir Putin’s “war chest”.

As part of the push to isolate Moscow, Spain, Italy, Denmark and Slovenia expelled dozens of Russian diplomats suspected of being intelligence operatives on Tuesday, following similar moves in Ireland, France and Germany – a total of some 180 expulsions in 48 hours.

The Kremlin called it a “short-sighted move” that would complicate efforts to negotiate an end to the hostilities.

The Department of Foreign Affairs said Ireland would expel four “senior officials” from the Russian Embassy after the government said their actions were against diplomatic standards.

Speaking in Dublin yesterday, Foreign Affairs Minister Coveney said the government would keep an “open mind” and would keep further expulsions under consideration.

He added: “I have made it clear that I think it makes sense to have diplomatic channels open and to have a Russian embassy here despite the fact that I understand fully that Irish people are incredibly angry with what is happening at the moment and they rightly point the finger at Russia in terms of being the cause of all of this.

We made a decision to ask four senior members of the Russian embassy to leave Ireland, we may go beyond that but I am not in a position to announce anything further on that today

The killings in Bucha and elsewhere have galvanised support for Ukraine, with Washington announcing another $100 million (€92 million) in military aid, and produced new momentum for additional sanctions on Moscow.

“We had already concluded that Russia committed war crimes in Ukraine, and the information from Bucha appears to show further evidence of war crimes,” a US source familiar with the planned measures said.

Today, Washington, in coordination with the G7 and the European Union, is expected to announce measures including a ban on all new investments in Russia.

The Kremlin has denied any civilian killings, claiming the images emerging from Bucha and other sites are fakes produced by Ukrainian forces, or that the deaths occurred after Russian soldiers pulled out.

At the Security Council meeting, Moscow’s ambassador rejected Zelenskyy’s claims, saying the “ungrounded accusations… are not confirmed by any eyewitnesses”.

But satellite photos taken while Bucha was still under Moscow’s control show what appear to be bodies lying in streets where the dead were later found by Ukrainian forces and seen by journalists.

Western nations have given short shrift to Russia’s denials.

“What we’ve seen in Bucha is not the random act of a rogue unit. It’s a deliberate campaign to kill, to torture, to rape, to commit atrocities,” US Secretary of State Antony Blinken said.