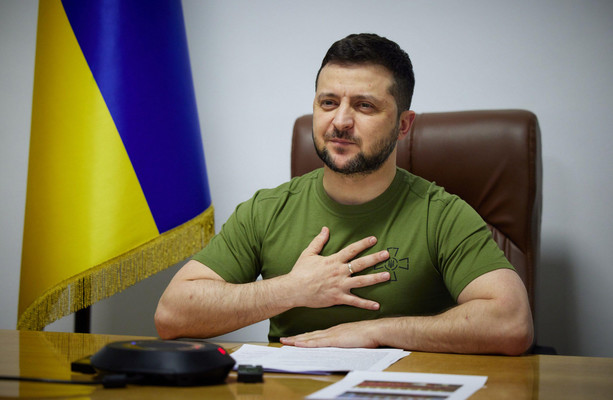 UKRAINIAN PRESIDENT VOLODYMYR Zelenskyy will address the Dáil and the Seanad today as he continues his tour of world parliaments, rallying support for Ukraine as it faces Russia’s invasion.

Ukraine’s charismatic leader will address both houses of the Oireachtas at 10am after accepting an invitation from the Ceann Comhairle in recent weeks.

Zelenskyy has been intensely engaged in a whistle-stop virtual world tour, addressing parliaments around the world, including the EU, United States, France, Germany, Australia, Italy, and the UK.

He has explicitly used the speeches to offer instructions on how the country can help Ukraine overcome Russia’s assault.

Just last week he urged the Netherlands to boycott Russian energy supplies and asked Norway – Europe’s second biggest gas supplier, behind only Russia – to deliver more fuel to both Ukraine and the European Union.

The morning’s joint sitting of both houses of the Oireachtas is expected to run for around an hour.

That includes Zelenskyy’s speech and approximately 40 minutes of responses from the Taoiseach, the Tánaiste and leaders and representatives from all the parties and technical groups.

One notable feature of the 44-year-old’s speeches is that he has tailored his remarks specifically for each parliament, referencing key moments in that nations’ history and relating it to the situation currently faced by his people.

When appearing virtually at the House of Commons he invoked the spirit of Winston Churchill, saying “we will fight in the forests, in the fields, on the shores, in the streets”.

When addressing the US Congress he mentioned Pearl Harbour, 9/11 and Martin Luther King Jr as he urged Washington for more help.

When beamed into the Bundestag he conjured the threat of a new wall dividing Europe, while in an address to French lawmakers, he said images of devastated cities such as Mariupol “recall the ruins of Verdun as in the photos of World War I that everyone has seen”. 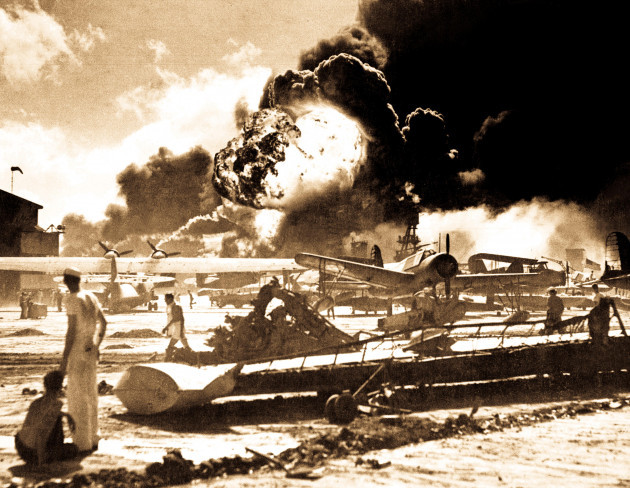 Photograph taken during the attack on Pearl Harbor, 7 December, 1941.

He’s also highlighted more recent Russia-linked disasters that are a sensitive subject for the nations involved.

Addressing Polish leaders he referred to the infamous 2010 Smolensk air crash, when the Polish president and a number of top officials were killed in a plane crash near an airfield in western Russia.

Russian and Polish investigators blamed the crash on heavy fog and failings from the flight crew.

However, the leader of Poland’s ruling Law and Justice Party Jarosław Kaczyński is among those who claim the crash was a political assassination.

Kaczyński’s twin brother Lech – who was Poland’s president at the time– was among those killed in the crash.

He highlighted another plane crash while addressing the Australian Parliament. In that case it was the 2014 downing of a passenger jet by Russian-backed separatists in eastern Ukraine. That attack resulted in the deaths of 298 people ​​— including 38 Australians.

Zelenskyy’s referenced the same incident during his speech to the Dutch as almost 200 citizens of the Netherlands were killed when the plane was downed.

He also highlighted the destruction of Rotterdam by German forces during the second world war during that address to the Netherlands lower house.

Many will be watching to see if Ireland’s history of struggle against an empire next door will provide a reference during today’s address.

Zelenskyy typically makes his speeches in Ukrainian, which is then translated live for the audience.

During his address to the European Parliament, shortly after the invasion began, the translator struggled to choke back tears as he relayed the president’s descriptions of the destruction being carried out by Russian forces.

He also regularly uses Russian – the language he grew up speaking – in order to appeal directly to Russian citizens, urging them to oppose the war.

The former actor put his command of English on display when he made a surprise appearance at the Grammy Awards on Sunday.

“On our land, we are fighting Russia, which brings horrible silence with its bombs. The dead silence. Fill the silence with your music, fill it today to tell our story,” he urged the music industry’s top artists.

Corporations have also come under scrutiny during Zelenskyy’s speeches. He used his address to the French to call on companies still working in Russia to “stop sponsoring” the Kremlin’s aggression against his country.

“French companies must quit the Russian market,” he said. “Renault, Auchan, Leroy Merlin and others must stop sponsoring the Russian war machine.”

Car maker Renault subsequently announced the shuttering of its production lines in Russia and hinted that it might divest its majority stake in domestic car giant AvtoVAZ.

Sports equipment chain Decathlon also closed its shops but presented the choice as one forced by supply chain problems, rather than a principled stand against Russia’s President Vladimir Putin.

Ireland’s Kerry Group said on Monday that it had suspended its operation in Russia and Belarus.

Building materials company Kingspan yesterday said it had exited the Russian market after deciding to leave in early March.

The Ukrainian embassy welcomed the announcements from the three companies, describing them as “important and timely”. 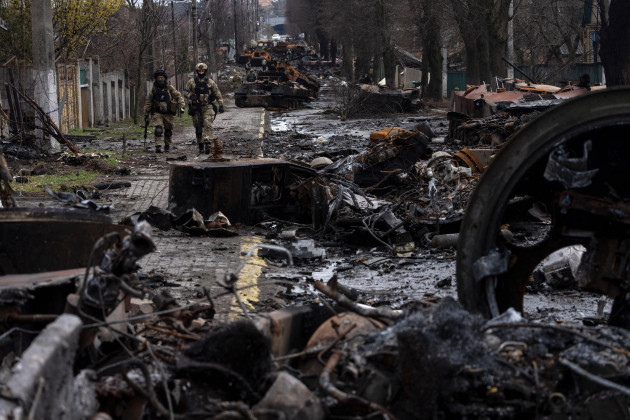 Soldiers walk amid destroyed Russian tanks in Bucha, on the outskirts of Kyiv

With the world still reeling from the exposure of the atrocity at Bucha – and other areas vacated by Russian troops – the Ukrainian leader will likely offer fresh condemnation of Russia’s actions and urge western nations to offer more assistance in fighting the invasion.

Addressing the United Nations Security Council yesterday, he accused Russia of committing the “most terrible war crimes” since the Second World War and called for those responsible to be “brought to justice” in tribunals similar to the Nuremberg trials, which were held after the defeat of the Germany’s Nazi regime.

What he’ll ask of Ireland – given its unaligned military position – will also be of great interest and may spur further debate about Ireland’s neutrality and how it responds to the war.

The Government backed tougher sanctions against Russia after the incidents emerged. The Taoiseach condemned “in the strongest possible terms” the atrocities and civilian deaths carried out by Russian forces.

Micheál Martin said that “nothing can be ruled out” in its response to the “appalling and barbaric” crimes committed by invading troops in Ukraine.

“I would rule nothing out in terms of how we respond, and I think Europe is repulsed by this,” the Taoiseach said on Monday.

Comments from Zelenskyy resulted in something of a diplomatic kerfuffle in recent weeks as he was interpreted as suggesting that Ireland hadn’t been very supportive of Ukraine.

During a video address to EU leaders at a summit in Brussels the Ukrainian leader worked his way through EU member states, highlighting those who are helping Ukraine and urging others to do more. 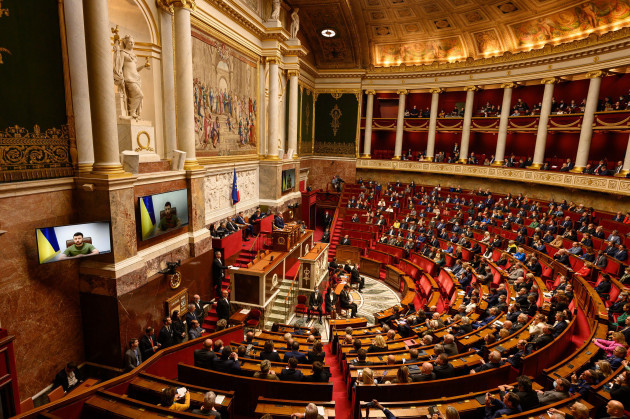 Lithuania, Latvia, Estonia and Poland were namechecked as standing for Ukraine while France and Germany were implored to increase their assistance. Hungary was singled out for criticism and asked to cut its ties with the Putin regime.

When it came to Ireland, according to a translation released by Ukraine’s government, Zelenskyy said: “Ireland – well, almost.”

The Taoiseach was quick to challenge reports that Zelenskyy had included Ireland among the group of countries that had not fully supported Ukraine.

The Ukrainian Embassy in Dublin also released a statement to RTÉ saying Ireland was “at the forefront of European countries” offering support.

“We would like to pay special tribute to the people of Ireland for their huge response, generosity, hospitality and willingness to grant protection for the Ukrainians,” it said.

Russia’s ambassador to Ireland, Yuriy Filatov, was among those invited to attend Zelenskyy’s address, along with all of the diplomatic representations based in Ireland.

However, Russia’s embassy did not respond to the invitation so, unsurprisingly, he will not be present.