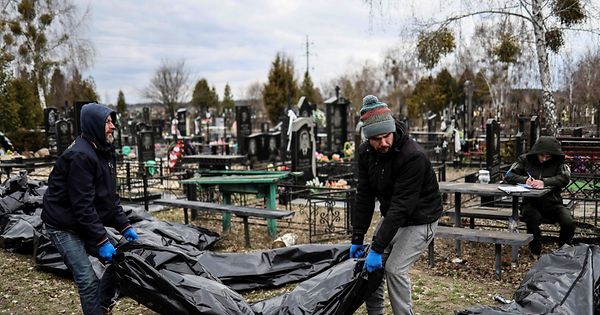 Russia’s military committed war crimes by targeting civilians, according to a report by the Organization for Security and Co-operation in Europe.

The investigation, which focused on the first five weeks of the war, looked into allegations of targeted killings and abductions and examined the impact of sieges. It called Russia’s attack on the port city of Mariupol an “extreme example.”

“Taken as a whole, the report documents the catalogue of inhumanity perpetrated by Russia’s forces in Ukraine,” Michael Carpenter, U.S. ambassador to the OSCE, said on Wednesday. “This includes evidence of direct targeting of civilians, attacks on medical facilities, rape, executions, looting and forced deportation of civilians to Russia.”

The report provides the latest marker for international outrage after President Vladimir Putin’s initiated the invasion of Ukraine on 24 February. It will also put further pressure on Western governments to react to Kyiv’s pleas for more weapons and tougher sanctions against Moscow.

OSCE investigators found credible evidence of war crimes for violating fundamental human rights including the right to life, prohibition of torture and other degrading treatment. The transgressions occurred mostly in areas under the effective control of Russia.

It also found multiple violations in the conduct of Russian forces, including the disproportionate use of some weapon types, such as cluster bombs and munitions with a large blast radius, that led to civilians deaths and the destruction of civilian objects at a scale that’s not justified by militarily.

The OSCE expert mission also found some irregularities in the treatment of prisoners of war by Ukrainian forces. The violations committed by Russia, however, are by far larger in scale and nature, and the report said that some actions could constitute crimes against humanity.

The investigation says that Russian suggestions that destruction of some civilian objects was caused by Ukraine’s military lacked any foundation, while some attacks were clearly attributable to Russia based on evidence, including attack angles and munition used.

The report looked closely at the 9 March attack on Mariupol’s maternity hospital and concluded that it was destroyed on purpose.

“Based upon Russian explanations, the attack must have been deliberate,” the report said. “This attack therefore constitutes a clear violation of international humanitarian law and those responsible for it have committed a war crime.”

The OSCE investigation started in March after requests by 45 member states, including Ukraine. Russia declined to nominate a liaison for the inquiry, which limited the Kremlin’s account of the incidents to public sources and statements.

In the time frame of the probe, the OSCE found only a limited number of cases in which civilians were directly targeted by Russian forces, but the report notes that allegations received after the end of the investigation, including executions of civilians in Bucha, would constitute a major war crime and a crime against humanity.

“Such an event deserves and requires a serious international enquiry,” the report said.