IN NOVEMBER, when the All Blacks commenced their haka at the Aviva Stadium, they looked across at the following players: Porter, Kelleher, Furlong, Ryan, Henderson, Doris, van der Flier, Conan, Gibson-Park, Sexton, Aki, Ringrose, Conway, Lowe and Keenan.

Those emboldened names line out for Leinster tomorrow evening. Only this time it’s Connacht they face, not New Zealand. Oh, and one other thing, this time they start with a five-point lead. How then can Connacht succeed where the All Blacks failed?

Well, here goes. If they reproduce the quality they displayed when they outclassed Ulster, Bulls and Stade Francais earlier this season, as well as the spirit that saw them dig out wins over the Stormers and Munster, that’ll give them a chance.

If their scrum holds up against Ireland’s first-choice front row; if their maul defence is solid; if their work at the breakdown is as effective this week as it was last Friday; if they have the courage of their convictions to pass the ball with the speed and accuracy they showed on their last visit to this stadium; if their A-Listers, Aki, Carty and Hansen, bring the best version of themselves; if Leinster have an off night, then yes, an upset is on the cards.

But you may have noticed how often the word if appeared in the previous couple of paragraphs.

So, the likelihood is that Connacht will win respect this evening rather than the tie, that they’ll capture the hearts and minds of the floating voter who tunes in and out of rugby between international windows, and who may not yet be aware of how talented a prospect Cian Prendergast is; how stupid Munster were to let Conor Oliver go; how Caolin Blade, John Porch and Dave Heffernan are top-class operators who fly under the radar; how their have-a-go attitude is both easy on the eye but hard on the opposition.

“We need to be another level better, and that’s in all areas of our game, defensively, set piece and in attack,” said Finlay Bealham, their Ireland international prop. “We have to meet fire with fire.” 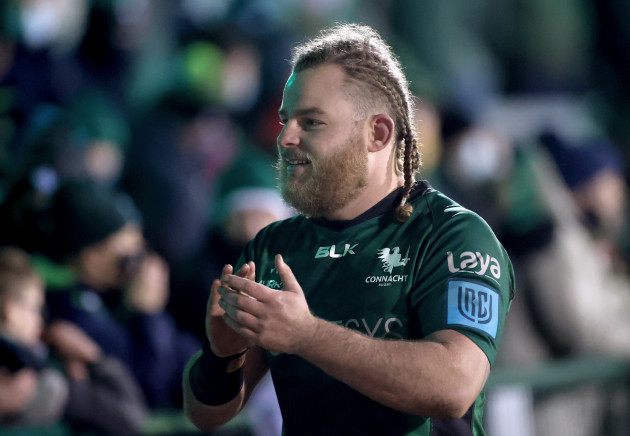 Bealham on form for Connacht.

Really, they have to meet fire with water. Too often this season, Connacht have turned winning situations into defeat when they got a little overexcited in matches when they really needed to be tactically conservative to the point of being boring.

Like, when they led Leinster 12-7 away from home but conceded three tries in 10 minutes; like, when they trailed 14-man Cardiff 18-16 and then had Hansen and Carty yellow carded in three minutes, prior to conceding two tries in the following four minutes.

Or how about the two tries in three minutes they coughed up to Glasgow at home when the score was 20-22? Or the 21 points gifted away to Edinburgh between the 28th and 37th minutes of that key URC game? Or the 28-10 lead that became a 28-29 loss to Leicester? Or the 31-20 lead that turned into a 37-31 loss a week later against Stade Francais?

Too often with Connacht this season, one mistake has led to a second, sometimes a third, and they cannot allow that trend to continue in the Aviva.

“For us the biggest understanding is we can compete with them,” said their coach, Peter Wilkins. “The players know our fundamentals are good enough but the challenge is delivering that time and time again, phase after phase under enormous pressure.”

That will be the difference between winning and losing. Leinster are relentless. Ask all those teams who have lost to them over the last four-and-a-half years of the URC/PRO14.

Better again, in terms of a character reference, ask the All Blacks.

It is hard to think of a more pivotal weekend for the four Irish provinces than this one. For Connacht, defeat effectively spells the end to their season seeing how the URC play-offs are mathematically still reachable but realistically beyond them.

So this is it, win or bust.

For Leinster, the same rule applies. While it is untrue to say they are sick of winning the URC, clearly Europe is a bigger deal for them. Why else was Johnny Sexton rested for the Munster game a couple of weeks ago but selected for these back-to-back Champions Cup ties against Connacht?

The make-up of the draw ensures at least one Irish derby in Europe this season but one has the potential to turn into two and two into three. Victory for Munster and Ulster over Exeter and Toulouse (the previous two champions) would set up an all-Irish quarter-final, a repeat of the 2012 Munster/Ulster showdown at the same stage of this competition.

Intriguingly, the winners of that quarter-final could face Leinster or Connacht in the semis, should the side who emerges from the Leinster/Connacht showdown prevail against the winners of Leicester and Clermont in the last eight.

The battle for Europe, this year, has the potential to turn into a localised squabble. 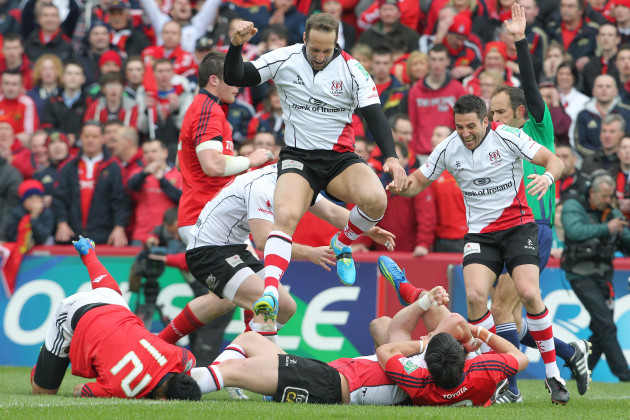 Sometimes we can doff our cap a little too often and deliver praise when it is not really deserved. We kind of did that with Clermont earlier this season, largely because they used to be a good side.

They aren’t any more. Can the same be said of Exeter? There is certainly evidence they are past their sell-by date, not just in their results this season, specifically in terms of how they used to be one of those sides who rarely left the opposition 22 without scoring. Now, they do so regularly.

Certainly last weekend, Munster escaped when they had little right to. That sort of thing wouldn’t have happened against the Chiefs in 2020. But this isn’t the same Exeter. Their gradual decline, combined with Peter O’Mahony’s likely return to the Munster starting XV, and the noise generated by 26,000 noisy locals suggests one thing: the biggest win of Johann van Graan’s tenure since 2018.

Dave Ewels, Tom Daly, Juan Cruz Mallia. All three were too fired up, Ewels for England against Ireland at Twickenham in the Six Nations; Daly for Connacht against Leinster in the URC; Mallia for Toulouse against Ulster last weekend. None of them lasted more than 10 minutes; their teams all lost. 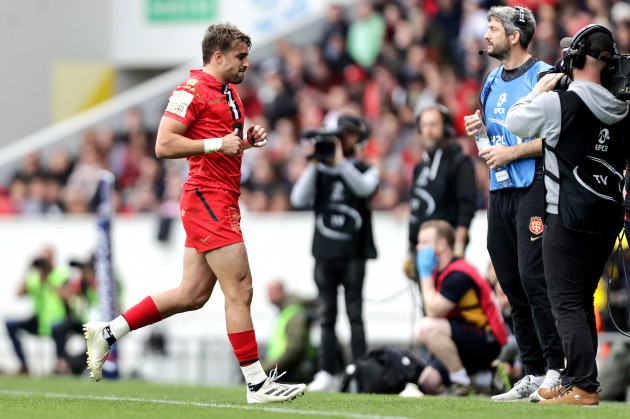 Mallia leaves the pitch with a red card

It is an issue Dan McFarland, the Ulster coach, is conscious of.

“The emotion is there, and the emotion is important in rugby. It’s a sport that lends itself to passion because of the nature of the game and what players have to put themselves through, but it’s not something that has to be driven in a week like this,” said McFarland this week.

It isn’t just coaches who need to be aware of it. Two games changed direction last weekend on the back of cards – the red that Mallia received, the yellow handed out to Jamison Gibson-Park. A red for Gibson-Park would not just have left Connacht with a numerical advantage but also, in all probability, the edge on the scoreboard coming into this second leg. No team – even Leinster – will get away with 14 players for 70-plus minutes in the modern game.

It means every player this weekend needs to keep their heads, in every sense.

So much to gain, so much Toulouse

They have taken significant scalps in recent years, Leicester Tigers, Edinburgh, Leinster and Clermont but an asterisk was next to all of the above. When they beat Leicester (2018/19) and Clermont (2021/22) away, neither team were at their peak.

When they did the double over Leinster in this season’s URC, you couldn’t fail to add that it is one thing to do it in the regular season, another to do it in a final. And yes, their victory over Edinburgh in the 2020 Pro14 semis was significant but that was in an empty stadium and that was Edinburgh.

This would be the real deal. Toulouse, the defending champions, over two legs, the chance to win their first knock-out game in this competition since 2012. Add all those factors into the mix and you would get the biggest Ulster victory since that win over Munster in Thomond Park, 10 years ago.

It can be done. They are unbeaten at home this season and were unbeaten for nearly two years earlier in the McFarland tenure, between October 2018 and December 2020.

But Romain Ntamack’s late score last weekend has altered the complexion of this tie. Six points is a manageable gap whereas 13 is not. 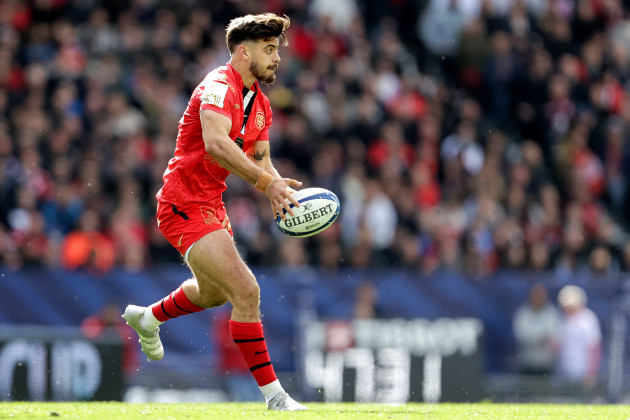 Ntamack’s try has given Toulouse hope.

If Ulster are to do it, they’ll have to find a way to contain Toulouse’s massive pack, one that weighed in excess of 1000kgs last Saturday; one that counter-rucked so effectively; one that spoiled Ulster’s line-out.

Interestingly, Ulster held their own in the scrum, highlighting once again that Andrew Warwick, their replacement loosehead, is a significantly improved player and that Marty Moore, their starting tighthead, is a hugely underrated one.

The underrated tag used to hang around Robert Baloucoune’s neck too. Not anymore. He was superb last weekend – and has now scored nine tries for the province since January. Remember too he got tries against Racing 92, Leicester, Bath, Northampton and Clermont in this competition. He likes the big occasion.

So, of course, does Antoine Dupont but Ulster man-marked him so intelligently last weekend, sending a minder with the scrum-half whenever he wandered upfield on supporting runs. That sort of thing takes planning and discipline. Credit Ulster for coming up with the successful strategy. They’ll need it to work again. If it does, this European competition is going to have a distinctly Irish feel to it all the way through to the semis.