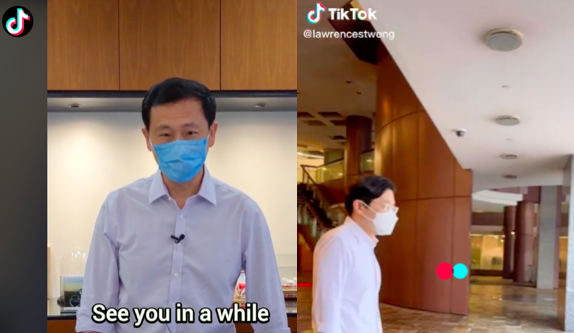 As TikTok has quickly become one of social media’s most popular  platforms in recent years, little wonder that more and more  people are leaping onto this short video bandwagon, cabinet ministers included.

Finance Minister Lawrence Wong, 49, and Health Minister Ong Ye Kung, 52, who have been touted as being among the potential successors to Prime Minister Lee Hsien Loong have taken to TikTok.

PM Lee, who had earlier said he would step down by his 70th birthday, has stayed in office since Deputy Prime Minister Heng Swee Keat,  who had been expected to succeed him opted out in April 2021.

Mr Lee turned 70 in February, and Mr Heng, 60, remains DPM but his decision  has left the succession question wide open.

Within the party hierarchy, Education Minister Chan Chun Sing outranks the others, as Second Assistant Secretary-General, and had been  chosen by DPM Heng. to be his deputy.

Health Minister Ong Ye Kung is the party’s treasurer, while Finance Minister Lawrence Wong is not yet in the CEC but is advisor to the party’s Policy Forum, which is for younger professional members to contribute to policy making, among other things.

If key leadership positions change during the next PAP CEC election later this year, the name that emerges on top is likely to be regarded as Singapore’s next Prime Minister.

And in the meantime, well, there’s TikTok.

Nikkei Asia quotes Economist Intelligence Unit analyst Yu Liuqing as saying of the two ministers: “Their TikTok activity should help bolster their profiles and enhance the outreach to the younger population.”

Furthermore, this won’t just help them, but also give their party a boost with the public, he added.

“For long, the [ruling party] has had an elitist notion surrounding it. More publicity on platforms like TikTok will help improve public perception on this front.”

Mr Wong has 26,100 followers on the platform, while Mr Ong has an impressive 39,500. Each of their TikTok entries has been viewed more than a million times. Both videos were, incidentally, about the recent changes in Singapore’s mask-wearing rules.

Today is the first day of the easing of Safe Management Measures 1-5, and marks another big step towards living with COVID-19.Took a walk from my office to nearby Tiong Bahru to see how people are adapting to the changes. Even with the reduced social restrictions, do still remember to keep your guard up, and take care of the vulnerable among us.

Mask on or off when outdoors? You now have a choice. But continue to do the sensible and responsible thing. Eg if you are in a crowded outdoors venue, you may want to keep masks on. Let’s all stay disciplined and vigilant, even as we embrace the hard earned relaxations to resume more normal lives!

National University of Singapore sociologist Tan Ern Ser was quoted in the report as saying that as long as Mr Ong and Mr Wong are perceived to be authentic in their videos, TikTok could prove a valuable platform for both.

“If they are hoping to up their national profile and appeal as future PM, then it makes sense to reach out to the widest possible spectrum of the electorate by stepping up their social media presence, in addition to print media and TV,” said Associate Professor Tan.

However, not everyone believes in the political persuasiveness of the platform when it comes to deciding Singapore’s future.

“I won’t read too much into these TikTok engagements by the two ministers. One doesn’t become the prospective prime minister simply by virtue of … [being] proficient in or well-received on TikTok,” Associate Professor Eugene Tan of the Singapore Management University told Nikkei Asia.