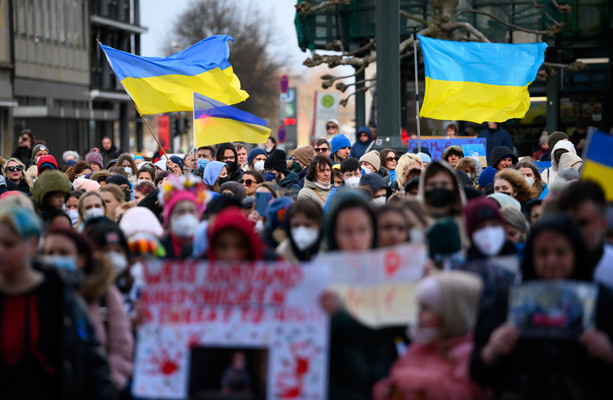 EVIDENCE OF RAPE by Russian soldiers is mounting in Ukraine as the International Criminal Court investigates suspected war crimes.

Women have shared testimony of being sexually assaulted, and reports from human rights organisations and media outlets are now adding to a body of evidence against Russia.

Minister for Justice Helen McEntee has said that Ireland has joined other European countries to share information raised by refugees about war crimes in Ukraine.

More than 21,000 refugees have arrived in Ireland in the seven weeks since the start of the war.

Overall, the United Nations has recorded 4.6 million people who have fled Ukraine, most of whom are women and children, though Ukraine’s border force says around 870,000 have since returned.

Thousands of refugees, along with people still in Ukraine, have described witnessing or experiencing acts of brutality by Russian forces.

With the support of the EU, the International Criminal Court is investigating suspected crimes against humanity and war crimes.

Hugh Williamson, the HRW Europe and Central Asia director, said that “the cases we documented amount to unspeakable, deliberate cruelty and violence against Ukrainian civilians”.

“Rape, murder, and other violent acts against people in the Russian forces’ custody should be investigated as war crimes,” he said.

In interviews with 10 people, HRW recorded “a case of repeated rape; two cases of summary execution, one of six men, the other of one man; and other cases of unlawful violence and threats against civilians between 27 February and 14 March 2022”, it said in a statement.

A 31-year-old woman told Human Rights Watch that a Russian soldier had repeatedly raped her in a school in the Kharkiv region on 13 March where she had been sheltering with her mother, 13-year-old sister, 24-year-old brother, and five-year-old daughter.

She said the organisation that the soldier beat her and cut her face, neck, and hair with a knife.

The woman fled to Kharkiv the next day where she received medical treatment and other services.

Human Rights Watch said it reviewed two photographs the woman shared with it that showed her facial injuries.

Similarly, in interviews with people from areas near Kyiv, Amnesty International’s crisis response investigators heard an account from a woman of being raped in her home on 9 March.

The woman told the investigators that two Russian soldiers entered her house, killed her husband, and repeatedly raped her while her young son hid. She later escaped the village with her son.

A 50-year-old woman in a rural area 70km west of Kyiv told the BBC that a Russian soldier took her from her home at gunpoint and raped her.

When she returned home, she found her husband had been shot in the abdomen while trying to run after her to help her. He died two days later.

Locals believe another woman, aged in her 40s, was raped and killed by the same soldier.

Ukraine’s Ombudsman for Human Rights Lyudmyla Denisova told the BCC that in Bucha, which was devastated by Russian occupation, 25 women and girls between the ages of 14 and 24 were “systematically raped” in the basement of a house.

Crimes against humanity are defined by the Rome Statute, an international treaty, as a “widespread or systematic attack directed against any civilian population”. They can occur in war or peace-time and include murder, enslavement, rape, forced transfer, torture, discrimination and more.

The Rome Statute outlines that war crimes are “grave breaches” of the Geneva Conventions, another set of treaties that identifies acts such as killing, torture, rape, hostage-taking, attacks on humanitarian missions and others as war crimes.

Neither Russia nor Ukraine are parties to the ICC, but since Russia’s invasion of Crimea in 2014, Ukraine has accepted the court’s jurisdiction for crimes committed on its territory.

Human rights organisations, Ukraine, and other countries are trying to record evidence of rape and other war crimes to build an international case against Russia.

US President Joe Biden called Russia’s actions in Ukraine a genocide this week, the first time the US administration has used the term.

“Yes, I called it genocide,” Biden told reporters when asked about his use of the word during a speech earlier in the day.

“It’s become clearer and clearer that Putin is just trying to wipe out the idea of even being able to be a Ukrainian. We’ll let the lawyers decide internationally whether or not it qualifies, but it sure seems that way to me,” he said.

“More evidence is coming out of literally the horrible things that the Russians have done in Ukraine and we’re going to only learn more and more about the devastation.”

Russia has denied perpetrating war crimes and has not taken responsibility for civilians’ deaths.


Speaking at an Association of Garda Sergeants and Inspectors (AGSI) conference on Monday, Minister for Justice Helen McEntee said Irish authorities liaised with Germany to develop a strategy for handling witness statements from refugees who arrive here.

A specialist questionnaire has been developed that will be used to record their experiences.

“I’m absolutely committed to and support any effort that we can to make sure that those who are responsible for the absolute atrocities that we’ve seen in recent weeks [are] held responsible,” said McEntee.

“This is an issue that we discussed in the Justice Committee only a few weeks ago, where a member from the ICC [International Criminal Court, which prosecutes war crimes] spoke to us,” she said.

“Speaking to the Garda Commissioner [Drew Harris] and his team recently, they were engaged with our colleagues in Germany, where they have already set out a template for people to be able to write out their experiences and what they have seen and what they have gone through.

“We’re trying to adapt that and change that so we can use it here.”

“We also, only in recent weeks, agreed a specific platform which allows all European countries to engage with each other to share information, and specifically this issue is something that had been raised in need of a response.”

The International Criminal Court is continuing its investigation, with countries like France and Germany also sending experts and opening additional probes into war crimes in Ukraine.