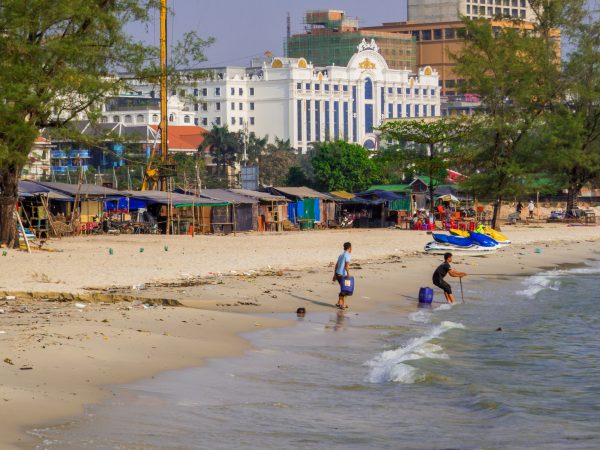 The joint police operation offered the latest evidence of an organized crime racket that spans the Mekong region.

A casino looms behind Ochheuteal Beach in Sihanoukville, Cambodia, on January 14, 2020.

A cross-border operation by Thai and Cambodian police earlier this week rescued 66 Thai nationals from captivity in Cambodia, where they were forced or tricked into running telephone scams.

According to a report from Reuters, the operation broke up what authorities described as a part of a wider Chinese-run transnational crime scheme. The rescue came a few days after Cambodian police rescued 16 Malaysian nationals held captive in Sihanoukville on Cambodia’s south coast, as Luke Hunt wrote in The Diplomat this week.

These two cases were the most recent pages in a thickening catalog of evidence about organized crime rackets that are ensnaring unknown numbers of Southeast Asians. The stories are all much the same: workers are typically drawn to Cambodia through social media advertisements promising high-paying jobs. As soon as they arrive in the country, however, their travel documents are seized and they are held and forced by racketeers to make scam calls in their own languages. Those who refuse are subject to various forms of violence and mistreatment.

As Thailand’s assistant national police commissioner Surachate Hakparn told Reuters this week, those who refuse to participate in such operations “get assaulted, some get whipped, others get electrocuted … Some get beaten up and others get locked in dark rooms and are not given food.” The lawyer for the 16 rescued Malaysians said that they were beaten, slapped, and abused with electric shocks.

The scale of these operations is hard to determine, but it appears to be taking place at a nearly industrial scale. The Reuters article contained the remarkable revelation from the Thai police that since October, more than 800 Thai men and women have been rescued from scam call centers in Cambodia. Surachate added that more than 1,000 Thais are still working in scam call centers in cities like Phnom Penh, Sihanoukville, and Poipet.

The rise of these Chinese-run scam operations is closely linked to the increasing economic integration between China and mainland Southeast Asian over the past decade, and the accompanying surge of investment from the PRC. One component of this has been the entry of Chinese organized crime syndicates into parts of the region with weak legal frameworks and corrupt local elites providing accommodating conditions for illicit activities.

It is no surprise that such operations have focused on “wild west” towns like Poipet and Sihanoukville; the latter was known for the presence of organized crime long before its sudden Chinese investment boom. In mid-March, 35 civil society groups urged the Cambodian government to address “a crisis of forced labor, slavery, and torture” in facilities that it described as “slave compounds.”

This has also taken place in other territories and special economic zones that exist beyond the effective reach of the host country’s legal apparatus. Last month, I wrote about the Golden Triangle Special Economic Zone (GTSEZ), a gambling and tourism area in northwestern Laos that has been suspected of involvement in a range of criminal activities, including claims of trafficking that echo the recent reports from Cambodia.

In early February, Lao police raided the GTSEZ and rescued six local women who were attracted to the zone by the promise of lucrative jobs as telemarketers in the casino that dominates the zone, and then pressed them into servitude, either in brothels or in the casino’s laundry service. This followed the daring escape on January 20 of another eight women from the zone. Similar conditions exist in outlying regions of Myanmar that are governed by ethnic rebel armies or pro-regime militia groups.

The exact workings of these rackets remain unclear, but there is mounting evidence that these are regionally coordinated, and linked to other nodes of illicit activity, such as the massive drug trafficking syndicates that operate in eastern Myanmar. As a by-product both of China’s economic boom and of the enclosure of once-remote parts of mainland Southeast Asia, a process that continues to outpace regional law enforcement capacities, it is likely that we will see many more such stories in the months to come.