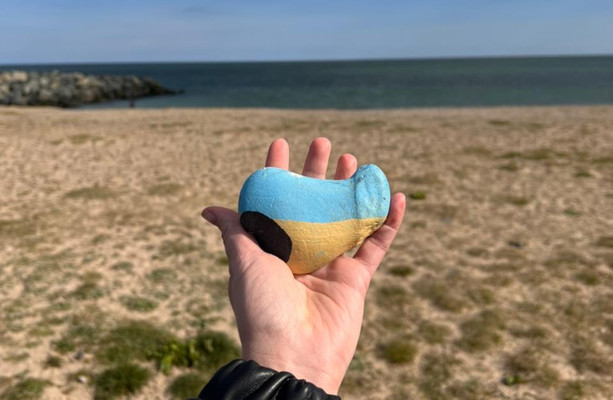 During the pandemic, she and her husband moved from their country’s capital city to a suburban town with greenery and fresh air – a town called Bucha.

Soon, that town would be internationally known for scenes of devastation and horror.

Less than five kilometres from Bucha’s centre is the Antonov International Airport of Hostomel, used by cargo carriers and the Ukrainian Air Force.

On the first day of the invasion of Ukraine, Russian forces descended on the airport, hoping, according to US intelligence, to establish an air bridge that would help Russia seize control of Kyiv.

From their home in Bucha, Nadia and her husband could hear the fighting at the airport, and they knew they had to leave.

Now, they are living in Ireland, where Nadia says they have been greeted with huge kindness, but she worries for her parents still in Ukraine and hopes to return home someday.

The fighting at the airport was one of the first flashpoints of the invasion, and soon, Russian troops would move in on the town of Bucha – but it would take just over a month before the devastation that ensued would come to light.

‘We were close to nature’

Before the war, Bucha was “really magnificent – little and fancy,” Nadia described to The Journal.

“It was comfortable to get to Kyiv if we needed and to spend our free time in the fresh air, in the forests, on walks in the parks. We really liked the city and we had a lot of relatives there from the side of my husband.”

Her family’s husband owned a cottage in Bucha where the couple moved to during Covid-19 restrictions.

“We were close to nature. Every Sunday, for example, I used to go to the park. It was really famous and people from all the Kyiv regions might try to see this park in Bucha. And in summer, for example, I was a practising yoga teacher, I would hold some yoga classes in this park and I went jogging through the woods and fresh air. It was really cool to be there.” 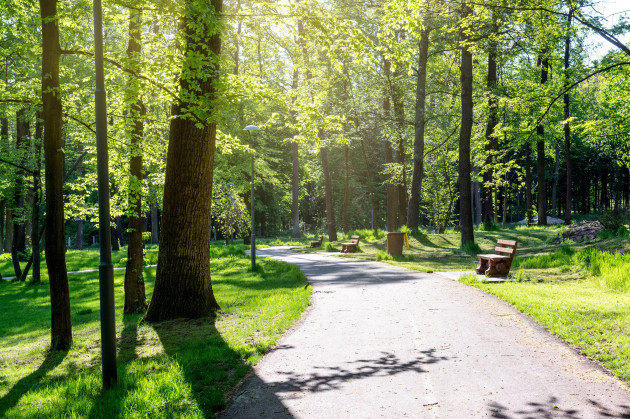 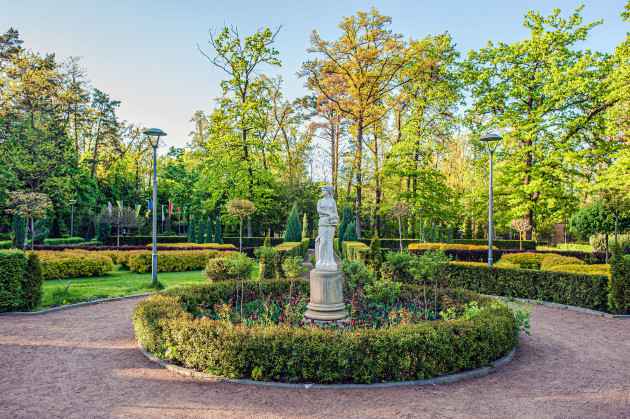 A park in Bucha, Ukraine

On 24 February, hours after Russia began to invade Ukraine, Nadia saw helicopters in the sky.

“Bucha and Hostomel are very close to each other. When helicopters tried to bomb the airport, we saw when it was happening. We heard firstly and when we tried to get from the city, we saw helicopters in the sky.”

She described the scene as a “horror”. “I couldn’t even explain our feelings.”

Nadia escaped with her husband and mother-in-law to western Ukraine, which, as she pointed out, also wasn’t safe from Russia, but was less vulnerable than towns like Bucha and Kyiv that are close to the Belarusian border.

Her immediate family, who were living in Kyiv, also travelled to western Ukraine, where her mother and brother have remained. Her father is in central Ukraine with Nadia’s grandmother, who needed someone to care for her.

“She’s old, and she needed to be with someone who can help her, and my father decided to help her there.”

Ukraine regained control of Bucha at the end of March, re-establishing access for humanitarian organisations and media – who witnessed devastating scenes.

AFP journalists reported finding civilian bodies in the streets, some of whom had their hands tied behind their back. Homes have been obliterated.

More than 400 people have been found deceased and 25 women have reported being raped, according to Bucha’s mayor.

On a visit to Bucha, the International Criminal Court’s chief prosecutor said that Ukraine “is a crime scene”.

Russia immediately denied responsibility for the deaths and destruction, claiming that photos were staged.

However, its attempts to discredit reports from Bucha have been proven false – for one, Russia’s defence ministry claimed that a video showed a person pretending to be a corpse and moving their arm, but the appearance of movement was actually caused by a raindrop on the windscreen of the vehicle the clip was recorded from.

Some of Nadia’s family members remained in Bucha.

“Our relatives couldn’t leave there. They tried to stay in Bucha and they decided to stay there because they thought that later they could escape, but it was really hard. It was not easy to leave there later,” she said.

“They spent three weeks under occupation and under their houses in a shelter. There was no electricity, water or gas. If it was possible, they tried to cook their food over fire in the fresh air near their house.

We couldn’t contact them because there was no electricity and they couldn’t charge their phones. We had no connection with them.

“When they left Bucha and they told us their story, they told us that there were rockets everywhere and soldiers killed everyone on the street. They would go to houses of people, and if someone didn’t open the doors to the Russian soldiers, they killed the people.

“If they asked for food, for example, or demanded something, and Ukrainians didn’t want to be in contact with them, they also killed them.

“Some of my relatives, some of them escaped from Bucha and some of them are still there. They are in the Territorial Defence Forces. They try to defend Bucha and help the Kyiv region and defend Kyiv.”

Nadia is one of more than 20,000 Ukrainians who have travelled to Ireland.

“When we arrived here, I met a lot of Ukrainians… Everybody has their own story. Everybody is from different cities and from different parts of Ukraine. Some of them have children and they escaped from war and tried to save their children to keep them safe,” Nadia said.

“We are very thankful to Ireland, because the people met Ukrainians with good, supporting words like ‘don’t worry’, ‘everything is okay’ It was really important for us in that period of time.

“I saw a lot of Ukrainian flags on the streets of Dublin and it was really a great surprise to me. I was excited. I see that your country is standing up for us and I’m so happy to see it because I think it’s great support for us.” 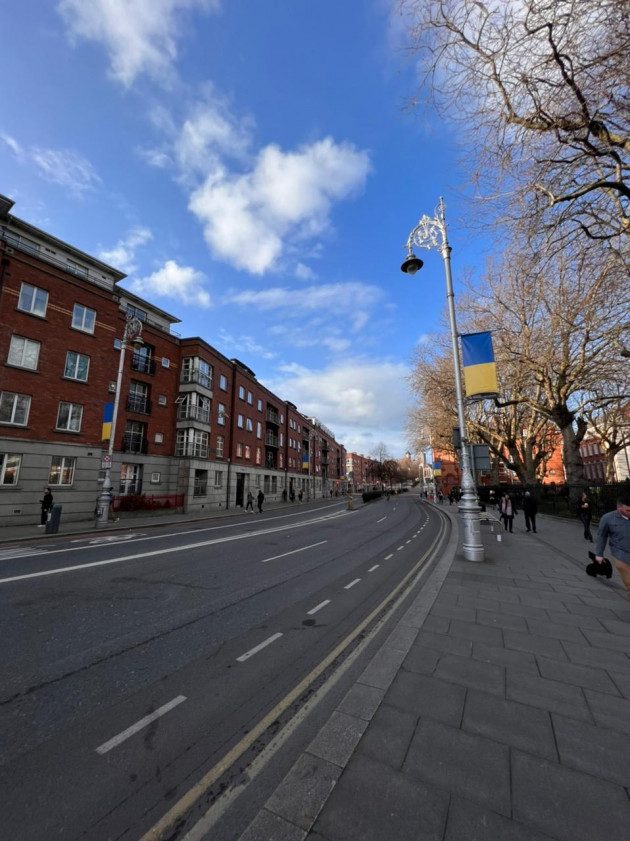 Signs of Ireland’s support for Ukraine that Nadia has photographed 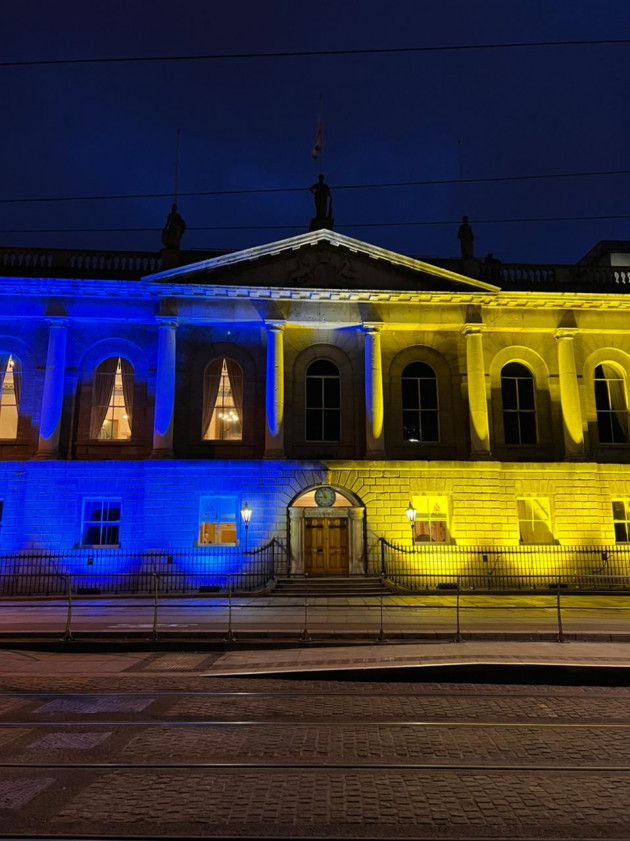 Signs of Ireland’s support for Ukraine that Nadia has photographed

Nadia spends a lot of her time monitoring news about Ukraine and seeing if she can find a job or a course to take in Ireland.

“I also try to find a job here to help Ireland because she helped me, and to help my parents, because they’re still there [in Ukraine]

“The economic situation in our country, some people lost their jobs, and my parents also lost their jobs and my brother[‘s]. I know that I need to help them and give them financial support and if I have an opportunity to help them, I will try to do it.”

She explained how the Russian invasion completely derailed the lives of ordinary civilians.

“We couldn’t even imagine that it could happen to us, because before the 24th of February, we had simple, normal lives. We had dreams of the future. For example, our family, we [had] planned to go on summer vacation,” Nadia said.

People that have simple normal lives and dreams and then one day, Russia took everything – not only our dreams, not only our plans, but some of them stole people’s lives.

“We couldn’t even imagine how the world let this situation happen,” she said.

“This situation is unbelievable in the 21st century. We will never never forget this. I don’t think that it’s like war, it’s like genocide of Ukraine, because firstly, they tried to destroy all important military points of Ukraine, airports and so on, but after that, they killed civilians, they killed people, they killed children.

“After that, when we rebuild our country, our cities, our houses, we will host all these people who supported us and welcome them to Ukraine to show them how it is a beautiful, amazing country.”