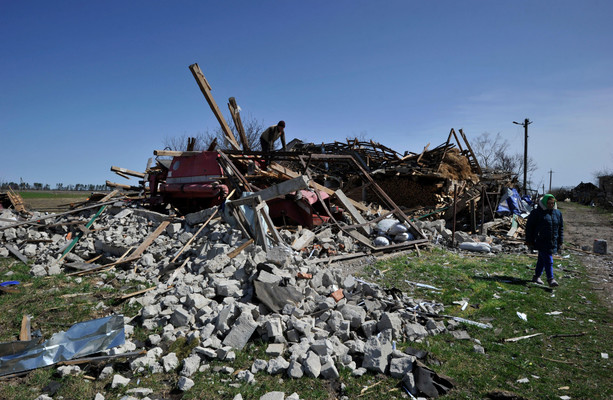 RUSSIA’S DEFENCE MINISTRY has warned it will intensify attacks on Kyiv in response to Ukrainian strikes on Russian soil, after accusing Ukraine of targeting Russian border towns.

Russian officials accuse Ukraine of sending two helicopters across the border to bomb a town in Russia’s southern Bryansk region, wounding seven people including a toddler. Ukraine has denied the accusations.

“The number and scale of missile strikes against targets in Kyiv will increase in response to any terrorist attacks or sabotage committed by the Kyiv nationalist regime on Russian territory,” it says.

The Ukrainian presidency says explosions were heard in the Vasylkiv area outside the capital.

President Volodymyr Zelenskyy, in a late-night address, told Ukrainians they should be proud of having survived 50 days under Russian attack when the Russians “gave us a maximum of five”.

Zelenskyy called it “an achievement of millions of Ukrainians, of everyone who on 24 February made the most important decision of their life – to fight”.

The president gave an extensive listing of the many ways in which Ukrainians have helped to fend off the Russian troops, including “those who showed that Russian warships can sail away, even if it’s to the bottom” of the sea.

It was his only reference to the Russian missile cruiser Moskva, which sank while being towed to port.

Russia invaded on 24 February and has lost potentially thousands of fighters. The conflict has killed untold numbers of Ukrainian civilians and forced millions more to flee.

Zelenskyy said he remembered the first day of the invasion when many world leaders, unsure whether Ukraine could survive, advised him to leave the country.

He added: “But they didn’t know how brave Ukrainians are, how much we value freedom and the possibility to live the way we want.”

It came as the head of the UN World Food Programme (WFP) said people are being “starved to death” in the besieged Ukrainian city of Mariupol and he predicted the country’s humanitarian crisis is likely to worsen as Russia intensifies its assault in the coming weeks. Mariupol has seen some of the worst suffering since the invasion began.

WFP executive director David Beasley also warned in an interview yesterday with The Associated Press in Kyiv that Russia’s invasion of grain-exporting Ukraine risks destabilising nations far from its shores and could trigger waves of migrants seeking better lives elsewhere.

His fears were shared by the US ambassador to the United Nations, who accused Russia of making the precarious food situation in Yemen and elsewhere worse by invading Ukraine, calling it “just another grim example of the ripple effect Russia’s unprovoked, unjust, unconscionable war is having on the world’s most vulnerable”.

Linda Thomas-Greenfield told a UN Security Council meeting on war-torn Yemen on Thursday the WFP had identified the Arab world’s poorest nation as one of the countries most affected by wheat price increases and lack of imports from Ukraine.

The main factor for instability and the source of the problem today is not the Russian special military operation in Ukraine, but sanctions measures imposed on our country seeking to cut off any supplies from Russia and the supply chain, apart from those supplies that those countries in the West need, in other words energy.

The sharp exchange took place a day after a UN taskforce warned the war threatens to devastate the economies of many developing countries that are now facing even higher food and energy costs and increasingly difficult financial conditions.

In the Black Sea, Russia’s flagship the Moskva missile cruiser sank after an explosion and fire that Ukraine claimed was caused by a missile strike.


The ship had been leading Russia’s naval effort in the seven-week conflict, in which civilian killings have sparked accusations of genocide from the United States and others. 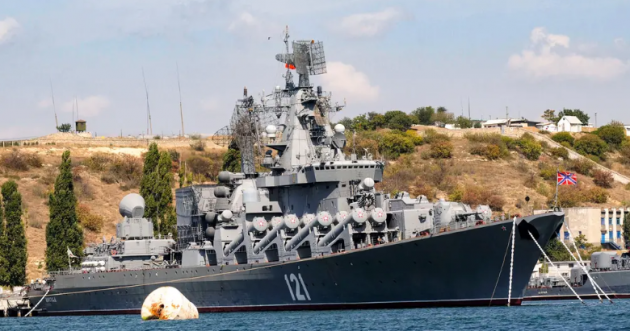 Russia’s defence ministry said the blast on the vessel was the result of exploding ammunition and added that the resulting damage had caused it to “lose its balance” as it was being towed to port.

“Given the choppy seas, the vessel sank,” the Russian state news agency TASS quoted the ministry as saying.

On the Ukrainian side, Odessa military spokesman Sergey Bratchuk said the ship had been hit by domestic Neptune cruise missiles.

In Washington, Pentagon spokesman John Kirby said he was unable to verify either version, but stressed that the sinking of the Moskva dealt a “big blow” to the Black Sea fleet.

The fleet has been blockading the besieged southern port city of Mariupol, where Russian officials say they are in full control.

Following its pullout from northern Ukraine earlier this month after failing to take the capital, Russia is refocusing on the east, with Kyiv warning of bloody new clashes to come in the Donbas region.

– With reporting from Press Association.