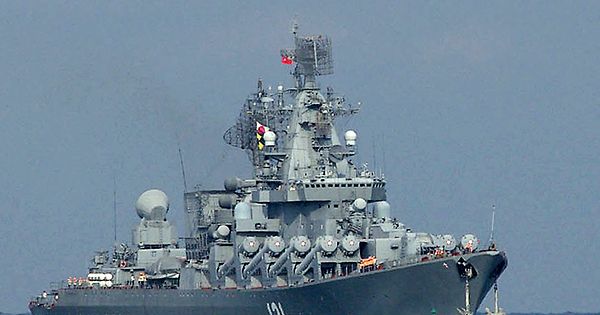 The governor of the Odesa region on the Black Sea coast, said on his Telegram account the warship was “seriously damaged” after a strike late Wednesday by anti-ship missiles

The governor of the Odesa region on the Black Sea coast, said on his Telegram account the warship was “seriously damaged” after a strike late Wednesday by anti-ship missiles

The flagship Russian missile cruiser that caught fire off the coast of Ukraine and later sank has been one of the most recognisable symbols of Ukrainian resistance since the war broke out.

The Moskva gained notoriety on 24 February, the day Russia kicked off its invasion, when it was one of two ships that confronted a small contingent of Ukrainian guards on the tiny Black Sea outpost known as Snake Island. In an account that swiftly entered the Ukrainian war lexicon, the guards reportedly swore at the ships to leave when ordered to surrender. An audio recording of the exchange went viral, causing a torrent of patriotic memes.

The incident also made it onto a stamp that went into formal issuance this week, drawing long lines at the main postal office in central Kyiv, Ukraine’s postal service said, comparing it to the wait for an iPhone. President Volodymyr Zelenskiy lauded the stamp on Instagram a day before reports emerged that the Moskva, named after the Russian capital, was damaged and later sank.

“We call for entries for the next target,” Ukraine’s postal service said on Twitter, posting an image of the stamp showing a Ukrainian soldier facing a hostile military vessel with a defiant gesture.  Ukrainian officials said the Moskva was the same ship involved in the Snake Island incident.

Maksym Marchenko, who is governor of the Odesa region on the Black Sea coast, said on his Telegram account the warship was “seriously damaged” after a strike late Wednesday by anti-ship missiles.

Russia’s Defense Ministry said ammunition had detonated on the Moskva during a fire and the crew was evacuated. Late Thursday the ministry was quoted by Russian news agencies as saying the ship sank in rough weather while being towed back to port.

Whatever the cause, the loss of the ship is a blow both to Russia’s war effort and its prestige, following on the heels of failed attempts to encircle the Ukrainian capital, Kyiv.

Russian President Vladimir Putin has pulled his troops back from Ukraine’s north and diverted them to the east, with leaders in Europe and the U.S. warning a major offensive could soon be launched to try and take control of the Donbas region. Nations in the European Union and the U.S. are rushing more military equipment to Ukraine.