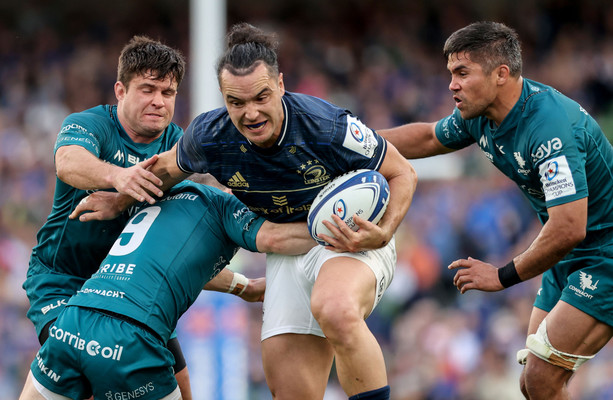 LEINSTER HEAD COACH Leo Cullen hailed the impact of James Lowe after the left wing scored four tries during Leinster’s 56-20 victory over Connacht in the second leg of their Champions Cup Round of 16 tie.

As well as scoring four times himself, Lowe was heavily involved in putting others into space in an all-court performance from the man wearing the number 11 shirt.

Leinster’s dominant eight-try win sent them into the Champions Cup quarter-finals, where Lowe will again be a key weapon as Cullen’s side look ahead to a probable visit to Leicester.

“He put in a good week this week,” said Cullen of Lowe. “There are always bits of everyone’s game to improve upon. He’s very, very talented, as we know.

“When he really applies himself, he’s as good as anyone out there. He worked hard this week and you can see the rewards that he got off the back of that.

“When we signed James, we saw that back in New Zealand with the Chiefs. He’s been here a long time now. He’s a colourful character, as we know. It was great to see him go well over the last couple of weeks.” 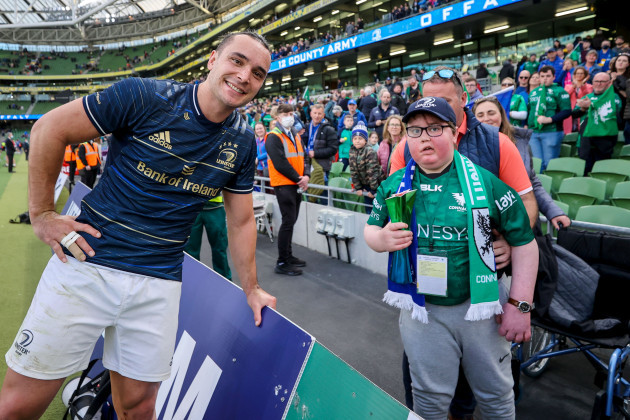 Lowe has been in outstanding form this season, shining for Ireland during their November Tests and then returning from injury to feature as they won a Triple Crown in the Six Nations.

The 29-year-old had a relatively tough start to his Test career with Ireland, being dropped at the end of the 2021 Six Nations but he went away, worked hard in the areas Andy Farrell had asked him to improve, and is now a leading Ireland player.

Lowe has remained an influential figure in Leinster too and having scored twice in last weekend’s first leg win away to Connacht, he was superb back in Dublin.

“Our job is to get the best out of the players and maximise their potential,” said Cullen.

“He has bucket loads of potential. It’s about making sure we are working with him to get the best out of him. We recognise the special talents that he has.

“There is good positive pressure in the environment because there is good competition for places. The lads know they need to play well because if they don’t, someone else is ready to step into their place in the team.”

Leinster boss Cullen was pleased with his side’s excellent performance against Connacht as they showed their class to advance into the quarter-finals.

“Better intent across the board, better accuracy when we got into good positions, so it’s that clinical piece,” said Cullen of what had impressed him most. 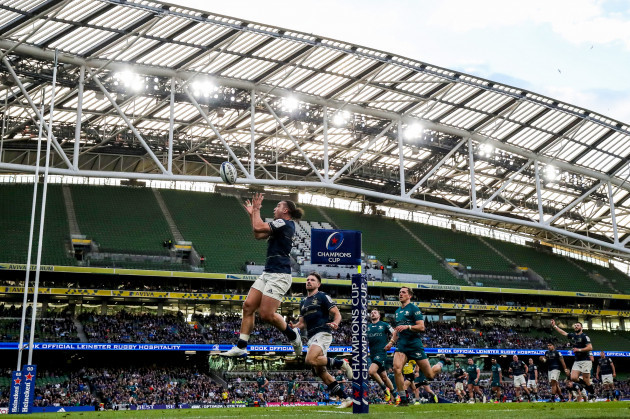 James Lowe rises to gather the ball for his fourth try.

“We were just a little bit off last week, it’s fair to say. The players, everyone was a bit frustrated with how we went, some good passages of play but not everyone coming together.

“Just the importance of everyone getting their jobs right, particularly away from home, vociferous crowd, you need to make sure you are very accurate in everything you do.

“That’s not just 11 or 12 players, it’s all 15. We’ve worked on that cohesion. It’s a challenge coming off the Six Nations, we’ve had a group that worked hard during a lot of the league games. We talked about it because when we came back there were those nine weeks where there’s five Six Nations games.

“The reality was we had seven games in the league in nine weeks so it’s just trying to get the groups working together now but the boys have applied themselves well.

“There was plenty to work on week to week to week. It’s important that we have that mindset over the next while because we all want to be involved in these knock-out games but if you don’t get your stuff right on the day it’s over and you’ve got a couple of free weekends on your hands.”