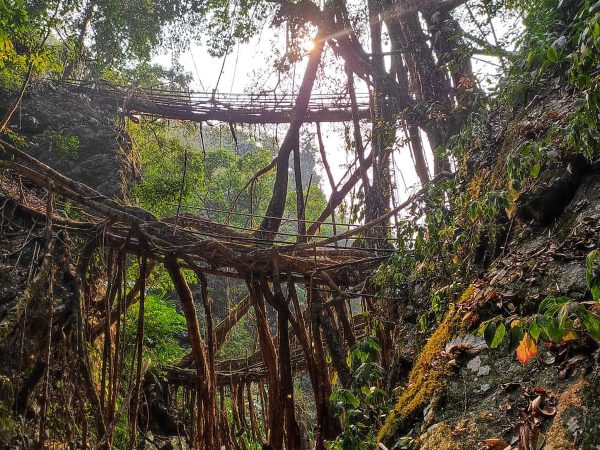 The bridges have been included in UNESCO’s tentative list of World Heritage Sites.

The living root bridges or jing kieng jri of India’s northeastern state of Meghalaya have been included in UNESCO’s tentative list as a preliminary step for the prestigious World Heritage Site status.

Found in south Meghalaya, the root bridges are built by the Khasi and Jaintia tribes by weaving the roots of the Indian rubber (Ficus elastica) tree into suspension bridges over rivers. These sturdy bridges span between 15 and 250 feet and could take as long as 10 to 15 years to gain the perfect shape. Most of them have a single span but some have more than one, such as the famous Umshiang Double-Decker Root Bridge.

Built over several centuries, the root bridges come in a variety of shapes and sizes. Different techniques have been employed to chisel these exotic bridges over streams and rivers. Occasionally, the roots are simply pulled and twisted by hand to merge with each other for the desired structure. They are also carved by making frames out of wood and bamboo, and then training the young roots out across these temporary structures. The roots are nurtured until they are able to endure the weight of people walking on them.

The living root bridges of Meghalaya are the eighth addition to the tentative list of sites from India’s northeast, which comprises of eight border states. The subsequent step would be to submit them for consideration by the World Heritage Committee. The government’s proposal to UNESCO for inclusion of these sites in the World Heritage Site category could be rejected as happened in the case of the Majuli island in eastern Assam.

The government must be able to justify that the site is endowed with “outstanding universal value” for inclusion in the coveted category. A total of 72 villages in south Meghalaya which have living root bridges has been forwarded by the government and now listed by UNESCO.

The government has delineated five aspects of the bridges to establish their “outstanding universal value” which have been mentioned by the U.N. agency.

These bridges reveal a distinct ethno-botanical journey ingrained in a profound “culture-nature reciprocity and synthesis” suggesting a masterpiece of human creative genius. They also disclose a critical survival practice that has evolved through experimentation indicating ‘remarkable breakthrough’ in nature-based design and engineering. The bridges personify the convergence of many facets of the local cultures such as traditional craft and farming, soil, water and forest conservation, climate response and climate change resilience and a distinct social system of the Khasi-Jaintia communities including the laws of inheritance and succession and village-based governance.

Further, the government is of the view that the bridges are rooted in a collective tribal identity and a spirit of cooperation that have been nurtured by ancient Khasi belief, moral code of conduct, and rules of etiquette.

Finally, the bridges have been found to foster an inclusive growth process across multiple generations with a high degree of robustness and longevity in extreme conditions. They also have a remedial impact on the surrounding soil, water and forest.