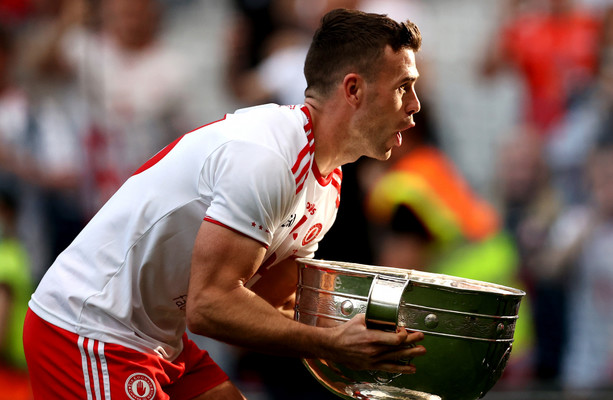 LAST YEAR THEY joint the ranks of greatness, this season they could move out on their own as the greatest Tyrone team of all-time. 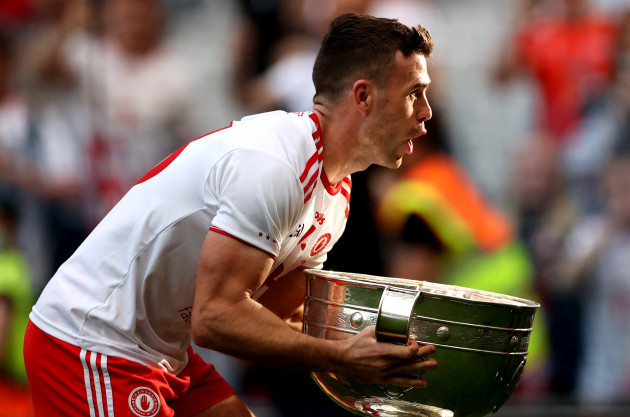 Darren McCurry with the Sam Maguire.

The Red Hand’s bid to defend the All-Ireland title for the first time in their history begins at Brewster Park this afternoon against Fermanagh.

While they won’t say it in public, you can be sure that the prospect of securing back-to-back titles is a burning ambition for this group.

Mickey Harte oversaw three Sam Maguires successes across seven years during his historic reign, yet securing successive crowns would put the 2021/22 side on a pedestal above the other three winning teams.

However, the nature of Tyrone’s up-and-down league campaign left many wondering if they were in the midst of another post-All-Ireland malaise.

They tend to struggle as Sam Maguire holders. Their best defence came in 2009 when they reached the All-Ireland semi-final. On that occasion they lost to Cork by four points, being dethroned by an outfit that played more than half the game with 14 men.

“The whole system changes when you winning the All-Ireland the previous year,” Kyle Coney tells The42.

“Every year Tyrone won the All-Ireland you go from being the hunter to being hunted. So the target changes and it goes on your back. So everybody automatically goes after the team at the top.

“The Ulster championship is a complete minefield as well. So the focus changes and it turns to an external thing where we’re going for two in a row.

“This is a thing where this Tyrone camp have to get where they want to go to a place where no other Tyrone team has ever went or no other Tyrone players have ever won two-in-a-row.”

Coney was in his first year on Harte’s senior squad in 2009 after turning down a two-year rookie deal with AFL side Sydney Swans.

He was still a teenager but arrived onto a seasoned panel that always seemed to endure an All-Ireland hangover.

In 2004, after their maiden All-Ireland, Tyrone were dumped out in the Ulster semi-finals by Donegal. They were shocked by John Maughan’s Mayo in the All-Ireland quarter-final. 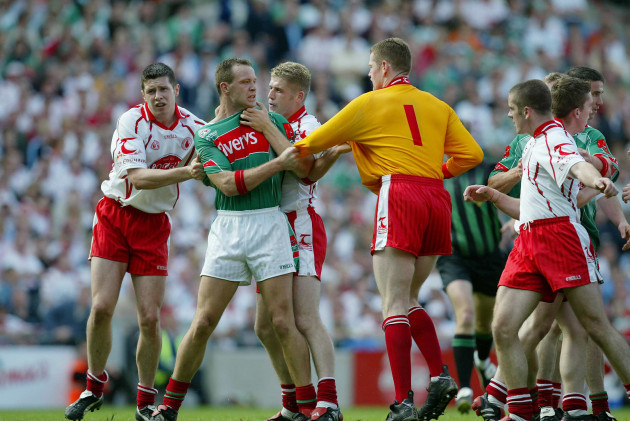 Maughan reportedly told his squad that after the last eight draw was made, “a roar went up in the Tyrone dressing room when they got Mayo.” David Brady later recalled how it turned Mayo into “raging bulls” intent on punishing Tyrone for underestimating the Connacht champions.

Tyrone had reacted in no such way, but regardless their reign as holders was over.

In 2006 came their least impressive defence of the crown. The season after their thrilling final defeat of Kerry, Tyrone scored just 0-5 in their six-point Ulster quarter-final defeat to Derry.

Legendary former Derry boss Eamonn Coleman was in the midst of a battle with non-Hodgkin’s lymphoma at the time. Coleman would pass away a year later, but his words prior to the game to the Oak Leafers gave them an extra edge heading into the clash.

Derry boss Paddy Crozier asked the late, great in to speak with the squad before the game.

“I asked him to come in and say a few words,” Crozier told the Irish News. “The two minutes that Eamonn gave us was the icing on the cake.”

Another case of Tyrone’s opponents drawing on motivation to prevail. 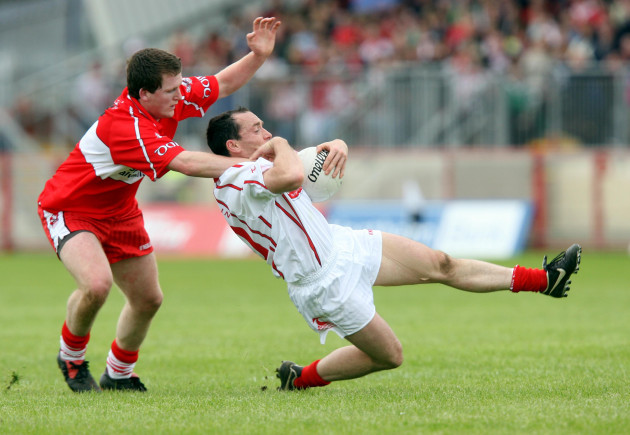 Harte’s team headed for the qualifiers where they required a replay to overcome Louth in round 1. They were put out of their misery in the following round by Laois, who secured a 0-9 to 0-6 victory.

Tyrone were unrecognisable from the swashbuckling side of the previous summer.

There are reasons to doubt whether the 2022 version will fare any better. Their league form was patchy at best and they required a final day away win over Kerry to survive in the top flight.

“This year was a bit of a mixed bag,” says Coney. “If a few results late on had have went their way you were maybe looking at a league final. For Tyrone, league didn’t go to plan at all. A draw against Monaghan, defeat to Armagh and Donegal. The win in Killarney and the loss to Dublin as well.

“On the closing day at one stage Tyrone were in the relegation. Look at the players they’ve lost over the course of the league. That will be a disappointment to the management team.

“It’s not the league campaign Tyrone expected after coming off the back of an All-Ireland victory.”

Mattie Donnelly and Peter Harte have been ruled out of the Fermanagh clash. Even worse, seven players have opted out from last year’s All-Ireland winning squad.

“It’s definitely concerning, it’s concerning,” remarks Coney. “For Tyrone people looking in from the outside, it’s worrying. We don’t know what’s going on with individuals or what’s happening in personal lives so it’s easy to speculate that the person or that person should have stayed. 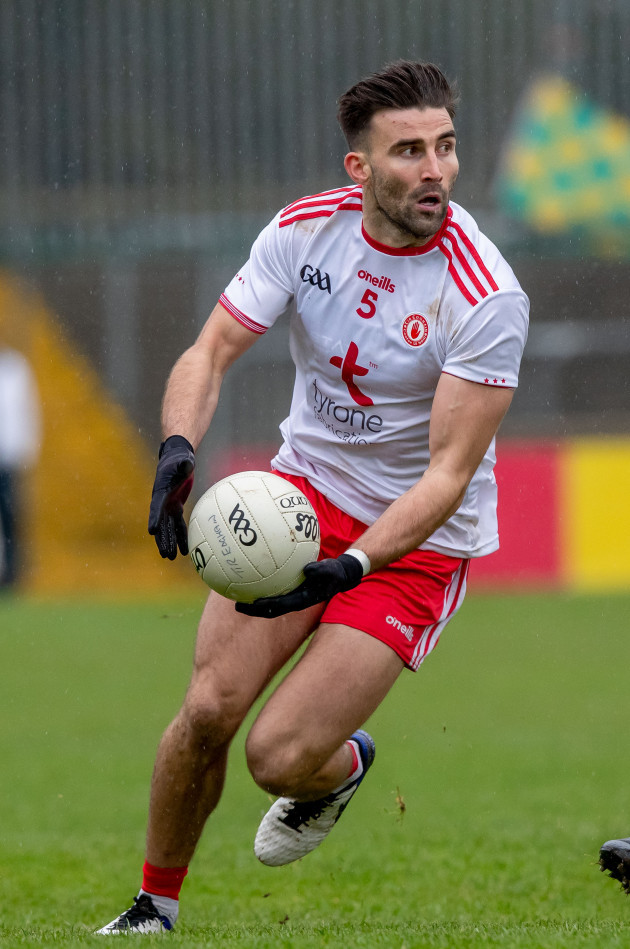 Tiernan McCann is a huge loss for Tyrone.

“They’ve all played throughout the league for a number of years so it’s not as if they need bedding in time, they’re able to come straight in and do a job and replace someone of the same ability that’s starting on the team. It has hampered that.

“Another point I’d make is it has probably hampered the quality of training as such. When you’re playing your A v B games and those players are on whatever teams, on any given day there could be a couple of them on the A team, the quality of the game goes up by 10.

“So it definitely has an effect and it probably just leaves the management now short of one or two options come maybe further down the line in the championship. They might have to throw in someone that might be untested as such in those waters.”

The absence of forwards with the ability of Donaghy, O’Neill, Brennan and Bradley is concerning when you consider Tyrone had the lowest scoring output of any side in Division 1.

Other such as Cathal McShane and Conor McKenna have failed to reach the heights of previous years. McShane was largely an impact sub last year but hasn’t made a major impact as a start during the league.

McKenna has battled injuries and only came off the bench in the 68th minute in the last round.

“He was playing really, really well and coming up with really big moments in games,” Coney says about McKenna’s first tow seasons after retuning form Australia.

“Last year, he probably wasn’t performing over 70 minutes really, really well. But again he was producing moments of magic. He was getting goals, he was creating stuff, he was involved and stuff around the middle of field that was creating chances for Tyrone.

“So his his lack of game time at the minute is definitely something that has hampered Tyrone as well. I don’t know if it’s an injury, I’m not sure but he doesn’t seem to be at the pace of it at the moment.

“I did refer them last year as a man that can produce a moment of magic out of nothing. He has that capability. And it’s probably something that Tyrone are lacking at the moment.” 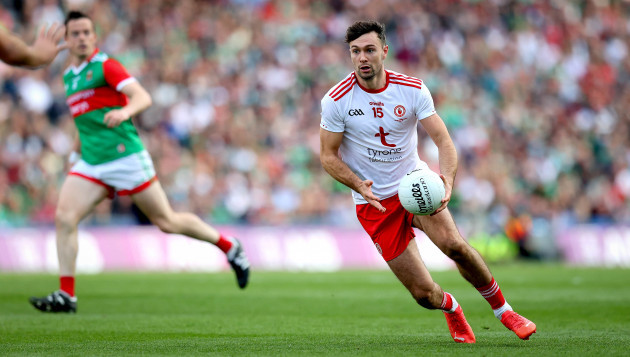 Tyrone need a fully fit Conor McKenna in their attack.

Of McShane he adds, “Everyone will compare Cathal to the All Star year in 2019, as you do it’s only natural instinct whenever someone gets to those sort of of All-Star performances.

“But we can’t forget that Cathal suffered a really nasty injury on his ankle. He just seems to be taking that one step or one second more on the ball that’s just then getting him bottled up or he’s just not getting the freedom that he was used to.”

However, Coney feels McShane’s lack form is more down to the failure of Feargal Logan and Brian Dooher to build the attack around him as Harte did in 2019.

“I think this could be a bit of a tactical problem as well. In 2019 the game plan was more focused more on him as an individual and feeding off him. Whereas this year seems to be more around the team.

“And last year I know, he made a huge impact off the bench but this year seems more team performances as such and scores. Tyrone are getting a huge spread of scorers.

“I do think it’s maybe a tactical thing where Cathal is getting himself caught up a wee bit in tackles and winning the ball in the wrong areas where we would like to see him a whole lot closer to goals when he is winning the ball.

Still, Coney expects Tyrone to overcome Fermanagh tis evening before they get a stern test from Rory Gallagher’s Derry.

“It’ll be interesting to see how they shape up against Fermanagh, who will come out with nothing to lose against the All-Ireland champions. They’ll give it all they’ve got for a certain period of time.

“I think Tyrone will overcome that test and we’ll be looking ahead to Tyrone v Derry, a local derby against a team that is very much on the rise at the moment.

He still rates them as the biggest challengers to favourites Kerry.

“I do put Kerry at the top of the pile at the moment, second would be Tyrone. I think Tyrone have the tools in the box, they have the capability (to beat Kerry).

“Maybe Dublin at their very best (could bear them), but I do think Tyrone are the team best equipped to stop Kerry winning the All-Ireland this year. I think they know how to to snuff out their attacks.

“They have the best players capable of taking out the rest of the Kerry team on man marking jobs. We’ve seen what Conor Meyler did on Paudie Clifford to a certain degree last year. It’s probably about limiting as much as we can do with David Clifford and then snuffing out the rest of the Kerry attack which was the game plan last year against Kerry.

“So I do think that they’re the team most equipped to take Kerry but I think Tyrone are navigating a way to that time when they meet. So that would be my fear. If Tyrone can get there they’re the best team to take Kerry in the long run. But at the moment, there’s no team better in Ireland at the minute than Kerry.”