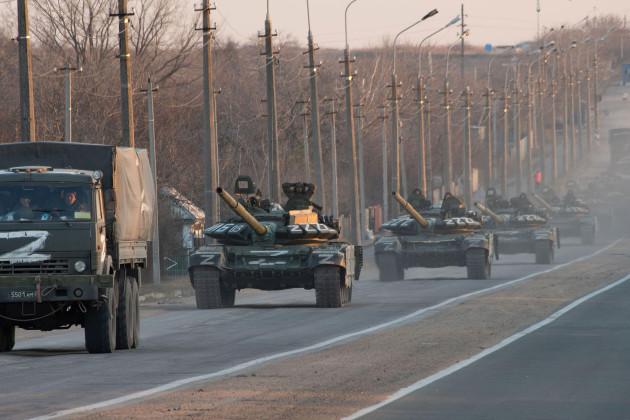 The Z symbol seen on a column of Russian tanks moving along the Mariupol-Donetsk highway in March.

Security services in Russia-allied Kyrgyzstan has warned citizens that they could face prosecution for sporting the “Z” symbol signifying support for Moscow’s invasion of Ukraine.

Kyrgyzstan’s national security committee told organisations renting out parade uniforms ahead of a holiday marking the defeat of Nazi Germany in World War II not to include the “Z” symbol, as it was “capable of inciting inter-ethnic hatreds”, a crime prosecutable under Kyrgyz law.

In a statement, the committee also warned citizens to refrain from Z-related insignia at the upcoming parade commemorating the victory on 9 May.

The Latin alphabet letter has been regularly sighted on the tanks and military uniforms of Russian forces that invaded Ukraine.

The Kremlin has encouraged its popularisation in civilian life, promoting it as a symbol signifying patriotism and national unity.

While reliable polling data is hard to come by, Russia’s invasion of Ukraine appears to have divided public opinion in countries such as Kyrgyzstan and its neighbour Kazakhstan, where there are notable ethnic Russian and Russian-speaking populations.

None of the five states in Muslim-majority Central Asia have directly criticised Moscow, which is an important trade and security partner for the region.

Kazakhstan, the region’s richest country with a large ethnic Russian minority, said this month that it does not plan to hold military parades in May, citing their expense.