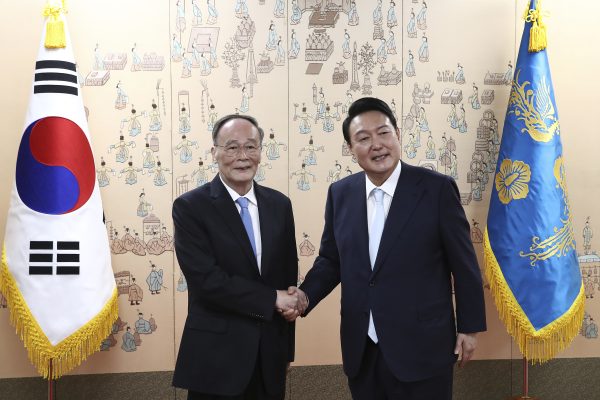 On May 10, Yoon Suk-yeol was inaugurated as president of the Republic of Korea (ROK). There were a number of foreign guests in attendance, with one of the highest profile being China’s vice president, Wang Qishan. Wang is the highest-ranking Chinese official to attend any South Korean presidential inauguration, a sign of Beijing’s eagerness to persuade Yoon not to follow through on campaign promises to take a harder line on relations with China.

Wang has little formal power as China’s vice president, but he is influential due to his close relationship with China’s leader, Xi Jinping, as demonstrated by Wang’s previous stint as the head of Xi’s signature anti-corruption campaign. His presence was a doubly strong signal given the circumstances: Other than Foreign Minister Wang Yi, few Chinese officials have traveled abroad since the pandemic began in early 2020, making Wang Qishan the highest-level Chinese leader to visit another country in over two years.

Asked about Wang’s trip to South Korea, Chinese Foreign Ministry spokesperson Zhao Lijian noted that “China and the ROK are and will remain close neighbors. We are also important cooperation partners.”

“We are convinced that under the concerted efforts of the two sides, China-ROK relations will continuously make progress in keeping with the times,” Zhao continued.

That was a sunny spin on the relationship, given Yoon’s hardline stance on China issues on the campaign trail. Yoon accused his predecessor, Moon Jae-in, of weakening South Korea’s alliance with the United States by leaning too close to China and vowed to change course. In particular, Yoon has repeatedly expressed his interest in expanding South Korea’s deployment of the U.S. Terminal High Altitude Area Defense (THAAD) missile defense system, which is a serious security concern for Beijing.

When South Korea first agreed to the deployment back in 2016, China responded with extensive (if unofficial) economic sanctions that cost South Korea billions of dollars. Somewhat ironically, however, that heavy-handed response also laid the seeds for Yoon’s more explicitly anti-China approach. China’s use of economic coercion torpedoed its image in South Korean public opinion – by May 2021, China was viewed even less favorably than Japan and North Korea, according to one survey.

Now China is hoping to limit further damage to the relationship. In a meeting with the new South Korean president, Wang conveyed an invitation from Xi Jinping for Yoon to visit China “at a mutually convenient time.” What that means, however, is very much up for interpretation. China has hosted only a handful of foreign leaders since the pandemic began in early 2020, with the notable exception of the Beijing Winter Olympics. With China currently in the middle of its worst COVID-19 outbreak since the initial Wuhan epidemic, Beijing is unlikely to welcome Yoon anytime soon.

Yoon’s predecessor, Moon Jae-in, visited China twice during his tenure: in 2017 for a state visit and in 2019 for the trilateral China-Japan-South Korea summit. Moon then reportedly rebuffed an invite to attend the Beijing Olympics earlier this year, amid a high-profile “diplomatic boycott” by the United States and its partners. Xi, however, has not made a trip to South Korea since 2014, during the administration of President Park Geun-hye.

Aside from a vague invitation, Wang also offered China’s suggestions for improving the relationship, including more coordination “to strengthen cooperation with us on Korean Peninsula issues.”

“China sincerely supports efforts by South and North Korea to improve their relations and seek reconciliation and cooperation, and aims to strengthen communication to pursue denuclearization and lasting peace on the Korean Peninsula,” Wang said, according to South Korea’s Yonhap news agency.

Notably, an offer to work with South Korea on “Korean Peninsula issues” (read: the North Korea conundrum) was absent from Xi Jinping’s initial phone call with Yoon shortly after the latter’s election victory in March. The new offer follows comments from Park Jie-won, the director of Seoul’s National Intelligence Service, that China had been pressuring North Korea not to conduct ICBM and nuclear tests – raising the possibility that Beijing is frustrated with Pyongyang’s recent behavior and thus more open to coordination with Seoul to find a solution.

Wang also floated the idea of “deepening practical cooperation in industrial supply chains.” The same topic has been a focus of renewed South Korea-U.S. cooperation under Moon, something likely to continue into Yoon’s tenure. Beijing is concerned about the possibility of Seoul pivoting toward decoupling its supply chains from China and is likely trying to head that off with its own vision for securing supply chain weaknesses revealed by the pandemic.

Another major concern for Beijing is Yoon’s stated willingness to improve relations with Japan. As part of the price for ending China’s economic coercion following the THAAD row, Beijing had extracted a promise from Moon not to involve South Korea in a trilateral alliance alongside Japan and the United States. That promise cost Moon little; there was little appetite for such an arrangement in Seoul, either. Close security cooperation with Japan has long been controversial in South Korea amid unresolved issues stemming from Japan’s colonial rule over the Korean Peninsula. Japan-South Korea relations entered a deep freeze following a series of South Korean court rulings that Japanese corporations owed compensation for wartime forced labor – an issue Japan says was fully resolved with the 1965 treaty that normalized bilateral relations.

Despite Yoon’s rhetoric, however, structural constraints will limit his ability to make a drastic foreign policy change. Reconciliation with Japan will be difficult to sell to South Koreans without some offer of compromise from Tokyo, especially given Yoon’s razor-thin margin of victory (and corresponding lack of a popular mandate). Likewise, it’s easy to talk about “getting tough on China” but harder to institute such policies when South Korea’s economy remains reliant on Chinese markets.

China won’t have to wait long to see just how far Yoon is willing to go to match his campaign rhetoric with action. U.S. President Joe Biden will travel to Seoul for a summit with Yoon on May 20 and 21. Their meetings will set the tone for South Korea-U.S. relations – and trilateral cooperation with Japan – under Yoon’s new administration.