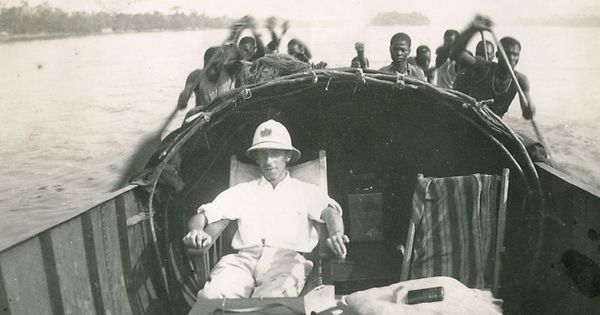 How Luxembourg took part in the evils of colonialism

A Luxembourg colonial administrator on a boat powered by Congolese paddlers, 1930s

Black Lives Matter has drawn the attention of a new generation to the evils of colonialism, and Western nations have started to rewrite the racist narratives with which they justified centuries of looting and enslaving people in other countries around the world.

Museums play a crucial role in that paradigm shift, not only because they are institutes of mass education, but also because many of their collections contain stolen goods or otherwise still reflect a paternalistic perspective on the role of the West in its former colonies that has long been obsolete.

Luxembourg is rarely mentioned in that debate, simply because it never had any colonies. Yet a new exhibition at the national museum for history and art (MNHA) in Luxembourg makes clear that is putting it too simply. If there is one thing the exhibition makes undeniably clear, it is that there are surprisingly many ties between the Grand Duchy and the colonies of others.

“Our Congo”, a picture album published as marketing for a chocolate brand, 1948

The exhibition is a grim voyage through Luxembourg’s past, with contemporary critical voices showing colonialism was always a controversial issue, while also giving room to modern Luxembourgers whose past reflects colonialism – often simply because that is where their families originated from.

White banners show the names of historical figures, often with a familiar ring to them. Take Maurice Pescatore, whose name adorns an – admittedly modest – square in the city. This Luxembourg industrialist and politician enthusiastically supported the use of violence by white colonisers against natives in his Congo travel diary, published after his death.

An older member of the Pescatore family, Jean-Pierre, is still widely celebrated for his philanthropy as he left the city enough money to set up an old people’s home that still exists. But he built his fortune by investing in tobacco plantations in Cuba, where the work was done by enslaved people.

The Luxembourgish press often celebrated these figures, and it is a welcome change to see their names associated to a darker side of the past that so far seems not to have tarnished their reputation very much.

Portrait of Nicolas Grang, the first Luxembourger who died in Congo in 1883 (Engraved by J. Schubert in 1884)

Nor does the royal family escape the curator’s prying eye. Like most royalty at the time, they defended “colonial activities”. Prince Félix, the husband of widely revered Grand Duchess Charlotte, was the protector of the Cercle Colonial, a lobbying and networking group. When it merged into the “overseas colonial association” Luxom, the family also took that under its patronage.

Fittingly, one black-and-white photo shows the royal children arriving at the beloved Schueberfouer annual fair in 1929, where visitors could look at a human zoo where Africans were exhibited in a traditional village setting. Among all the other attractions, it was one of the most popular.

The museum warns it has not attempted to hide the brutality of the period. It has hidden the worst images behind wooden panels the viewer can choose to lift. The titles – such as “photo collage of children with chopped off hands” prepare one for what is coming if one does.

It is encouraging to see that even as colonialism was an accepted practice, there were already dissenting voices in European journalism, but also in the form of wooden statues crafted by Africans that caricatured colonisers – in all likelihood subtly enough for white oppressors not to notice.

Money box used to collect money in churches for the Catholic missions. The African child gratefully nods its head when a coin is inserted.

There is also a story from a black journalist voicing his view on colonialism in a popular magazine. It is a brave and well-argued piece that does away with the idea that there was no way for Europeans to know local people did not adhere to the same white supremacist views they were ruled by.

More briefly, the exhibition makes clear how colonialism continues to burden developing nations even now it is over in name. Economic hardships, autocratic governments are often direct products of centuries of oppression.

The final part of the exhibition collects the voices of descendants and activists, who talk about the racism people of colour continue to meet in Luxembourg. That is wonderful, but it is hard not to notice there is little diversity among the speakers of a series of lectures scheduled as part of the exhibition.

“Luxembourg’s colonial past” offers a thoughtful and well-researched view on the issue. With minor flaws, it is nonetheless compulsory viewing.

The exhibition is on show until the 6th of November at the MNHA. Tickets for adults are €7. The museum is closed on Mondays.