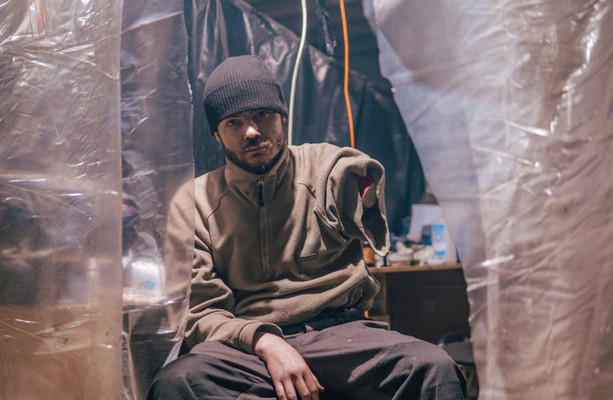 UKRAINE HAS ANNOUNCED it will hold its first war crimes trial over the Russian invasion, as Moscow accused Kyiv of shelling a Russian city in the war’s latest flashpoint.

The conflict has devastated cities and displaced millions, with fears also growing of its broader international impact as gas supplies to Europe were disrupted by a halt in Russian flows through Ukraine.

Kyiv has repeatedly accused Russian troops of committing atrocities since the invasion began on 24 February, and Ukrainian authorities said on Wednesday they would launch the first war crimes trial of the conflict.

The prosecutor general’s office said Vadim Shishimarin, a 21-year-old Russian service member, is accused of killing an unarmed 62-year-old civilian as he fled with four other soldiers in a stolen car.

“The man died on the spot just a few dozen metres from his home,” said a statement from prosecutor Iryna Venediktova’s office.

Venediktova’s office has said it has received reports of more than 10,000 alleged war crimes, with 622 suspects identified.

Ukraine has offered to release Russian prisoners of war in exchange for the safe evacuation of the badly injured fighters trapped inside a steel mill in the ruined city of Mariupol.

While fighting raged in Ukraine’s east and south, Ukrainian Deputy Prime Minister Iryna Vereshchuk said on Wednesday that negotiations were underway to release the injured fighters who are holed up in the last bastion of Ukrainian resistance in Mariupol. She said there were different options, but “none of them is ideal”.

The Russian invasion has sparked an exodus of nearly six million civilians, many of whom bear accounts of torture, sexual violence and indiscriminate destruction.

The UN Human Rights Council is due to hold a special session on Ukraine today.

Moscow has focused on eastern and southern Ukraine since it failed to take Kyiv in the first weeks of its campaign.

Ukraine’s forces were boosted by what Kyiv described as the recapture of four villages around the northeastern city of Kharkiv, close to the border with Russia.

In the Russian city of Belgorod, around 70 kilometres (43 miles) from Kharkiv, authorities said one person was killed and six injured by Ukrainian shelling. 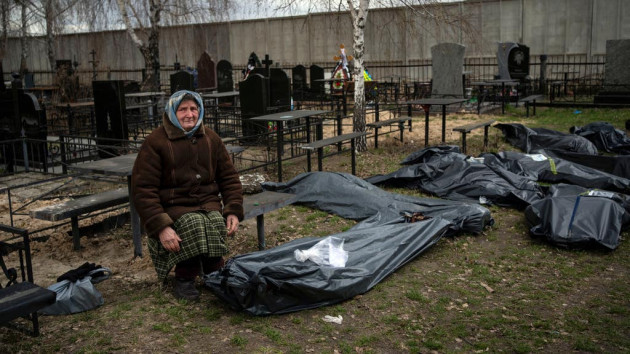 Nadiya Trubchaninova (70) sits next to a plastic bag that contains the body of her son Vadym Trubchaninov (48), who was killed by Russian soldiers in Bucha on 30 March.

Belgorod governor Vyacheslav Gladkov said it was “the most difficult situation” facing the border region since Russia sent its troops into Ukraine 11 weeks ago.

In April, Gladkov said Ukrainian helicopters carried out a strike on a fuel storage facility in Belgorod.

‘They come in waves’

In southern Ukraine, the pro-Kremlin authorities in the city of Kherson urged Putin to annex the region.

Kherson was the first major Ukrainian city to fall in the current conflict. It lies north of Crimea, which was annexed by Russia in 2014.

Kirill Stremousov, deputy head of Kherson’s Moscow-installed administration, said there would be a “request to make Kherson region a full subject of the Russian Federation”.

The Kremlin replied it was up to the residents of Kherson to “determine their own fate”.

Ukrainian presidential aide Mykhaylo Podolyak said Kherson would be liberated and “the invaders may ask to join even Mars or Jupiter”.

Ukrainian President Volodymyr Zelenskyy has framed his nation’s resistance to the Russian invasion as a “war against tyranny”, but the fierce fightback has carried a heavy cost.

In a rare release of battle casualty figures, Ukraine’s National Guard said today that 561 of its members have been killed and nearly 1,700 wounded since the invasion began.

Neither the defence ministry in Kyiv nor its counterpart in Moscow has provided official death counts, but in mid-April, Zelenskyy said between 2,500 and 3,000 Ukrainian soldiers had been killed.

Ukraine’s effort to hold the Russian-speaking Donbas region in the east has also become increasingly desperate.

“They come in waves,” volunteer fighter Mykola said of the repeated Russian attempts to push past a strategic river near a rural settlement called Bilogorivka.

Nato decision by Finland and Sweden

Much of the world has moved to isolate Putin as punishment for the invasion.

Kishida, whose government joined the tough measures against Moscow, added: “Russia’s invasion of Ukraine is not just a matter for Europe, but it shakes the core of the international order including Asia. This must not be tolerated.”

Russia has been hit with a wave of punishing economic sanctions that have started to take a toll on its foreign exchange reserves.

Zelenskyy said yesterday that he had spoken with German Chancellor Olaf Scholz about boosting penalties on Moscow.

“Step by step we are doing everything to make the aggressor feel the biggest pain from the aggression,” the Ukrainian leader said.

But ramping up the embargoes has not been straightforward, with concern among some nations in Europe that rely on Russian gas.

Kyiv said yesterday that Russia had halted gas supplies through a key transit hub in the east.

The stoppage caused supplies to plunge by 25% in Germany, which is dependent on Russia for its energy and has rejected an immediate full embargo on Russian gas.

The invasion of Ukraine has also prompted Sweden and Finland to consider Nato membership.


Finland is due to reveal its position on joining the bloc today.

Von der Leyen and European Council President Charles Michel are in Japan for talks that have touched on Russia’s invasion of Ukraine but also growing concerns about China’s role in Asia and beyond.

The annual summit comes with much of the international community rallying to pressure Moscow over Ukraine.

“Russia’s invasion of Ukraine is not just a matter for Europe, but it shakes the core of the international order including Asia. This must not be tolerated,” said Kishida, whose government has joined tough sanctions on Moscow, including on energy.

Beijing’s increasingly muscular stance in Asia was also on the agenda, with the EU looking to take a more high-profile role in confronting China.

“Our cooperation in Ukraine is critical in Europe, but it’s also important in the Indo-Pacific and we also want to deepen our consultation on a more assertive China,” said Michel.

“China must stand up to defend the multilateral system that it has benefitted from in developing its country.”

Von der Leyen said the EU and Japan were stepping up cooperation including launching a digital partnership that will focus on competitiveness and security.

She said the two sides would also work on supply chains, which have been disrupted by the pandemic and the war in Ukraine, but are also the subject of worry about China’s role in chip production.

“There are materials and technologies that have become essential to our economy and everyday lives, like semiconductors for example. We must be able to count on trustworthy supply chains,” she said.