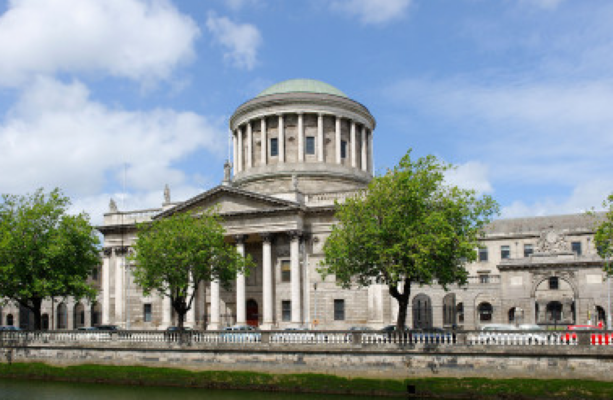 WORK HAS HALTED on the conversion of a former homeless shelter into accommodation for Ukrainian refugees because the building has been taken over by a group calling itself the Revolutionary Workers Union, the High Court has heard.

Lefroy House Eden Quay in Dublin City centre had been operated as emergency accommodation for minors in crisis for many years until its closure in early 2021.

The property which the Salvation Army holds a long leasehold interest in, had been renovating the property to accommodate refugees from war-torn Ukraine.

The Salvation Army had hoped to open its doors to the first group of refugees starting from June.

However, those plans are now on hold after the building was allegedly broken into and occupied on 1 May by a group calling itself the Revolutionary Workers Union, whose members are allegedly refusing to vacate the property.

It is claimed that the group intends to use the building to accommodate homeless people.
This afternoon, lawyers for the Salvation Army (Republic of Ireland) Company commenced High Court proceedings against persons unknown, who it is alleged are illegally occupying and trespassing on the premises.

Niall Buckley BL for the Salvation Army told the court that despite his client’s efforts to communicate with those in occupation the SA cannot access the premises and cannot continue to repair the building so it can be used to house the refugees.

Counsel said that his clients were given an email address to communicate with the occupiers, but no substantial meetings nor talks have taken place.

Counsel added that there have been several posts about the occupation on social media.

Counsel said that one of the persons believed to be in occupation had, while wearing a black balaclava, had given an interview to an online media channel.

The person said in the interview that the building was seized after being made the subject of a ‘People’s Acquisition Order’ and that it was taken over ‘in the spirit of the 1916 Rising.’
The person also made claims about the building’s condition and a purported attempt by the Gardai and security staff to enter the building, which counsel said his client does not accept.

The interviewee also made a statement intended to prevent anyone from retaking the building by saying that there are republicans in occupation there and should not go poking the bear and challenging anyone here.

Counsel said that the occupiers have also renamed the building as James Connolly House after the Trade Unionist and Socialist Republican executed by the British following the 1916 Rising.

They have also flown flags, including the Starry Plough and banners from the building stating “Housing for the People.”

Counsel said that the Salvation Army, which is a registered charity, has concerns about the building and needs to carry out works on the roof, steps to prevent water egress, and that its fire detection system needs to be regularly checked.

As a result of the alleged illegal occupation of the property the Salvation Army seeks an injunction requiring persons in the premises, and all others who have knowledge of the order to cease trespassing, vacate the building, and not interfere with the owner’s agents from taking possession of the former hostel.


The matter came before Ms Justice Emily Egan this afternoon, who on an ex-parte basis, granted the Salvation Army permission to serve short notice of the injunction’s proceedings on those in the building

The judge said that at this stage of the proceedings it was accepted that the plaintiff had made out a strong case that was likely to succeed at trial.

However, the court was not prepared at this stage of the proceedings to grant any interim injunction against persons whose identities are currently unknown.

The judge said that it was better that the persons in occupation be made aware of the proceedings first.

The judge also added that it was unlikely that anything will be done in relation to the premises when the matter next returns before the court.

The case was adjourned until Wednesday.