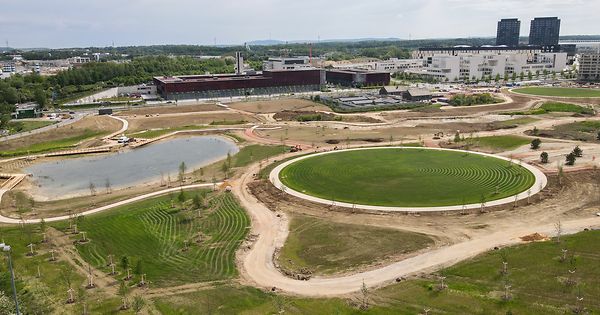 Covering an area larger than the Pentagon, €16 million development in Gasperich will include huge lake and will be able to host events

Covering an area larger than the Pentagon, €16 million development in Gasperich will include huge lake and will be able to host events

The park in Gasperich is still under construction

By Jeff Wiltzius and Heledd Pritchard

Luxembourg City’s biggest park – covering a wider area than the Pentagon – is due to open next spring with around 600 trees and a lake the size of two football fields.

The park, which will cost around €16 million and is being built in Gasperich, was initially expected to be ready by this summer but will now open next year, offering people an “oasis of tranquillity”, alderman Serge Wilmes said during a visit to the construction site.

The entire park will measure 160,000 square metres – slightly bigger than the Pentagon – and will have around 600 trees, including fruit trees from which people will be able to pick produce.

Around 10,000 people live in the Gasperich area, not far from the Cloche d’Or district, where numerous blocks of flats and offices have been built over recent years.

A long footpath being built at the new park in Gasperich

The park initially faced a year-long delay before receiving the go-ahead from the environment ministry, and works then further stalled amid a dispute over its ranking in a points system used in large-scale developments to compensate for environmental damage on construction sites.

The Drosbach river, which runs through the park, has been restored to reduce the risk of flooding and small fish will be placed in the river. Planning the route of the river took several years, according to Falvio Morabito of the Hydraulic Works Administration, and the lake does not depend on the river as a source.

There will be two large grassland areas measuring 4,000 metres long, where events will be able to be held. Building work on a brasserie with two terraces, which will cost an additional €5 million, is due to begin in October and is scheduled to be completed by June 2024.