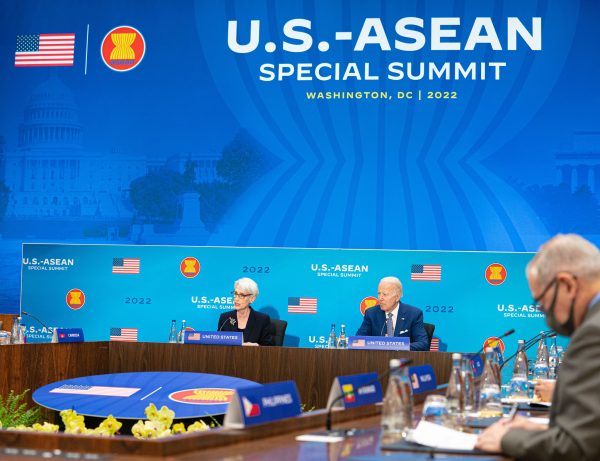 The meeting was an important watershed in the Biden administration’s attempts to engage Southeast Asia, a region that it views as central to countering China’s rising influence in Asia and beyond. Biden set this tone in remarks to his Southeast Asian counterparts on the afternoon of May 13, during which he described the U.S.-ASEAN partnership as “critical” and hailed the beginning of “a new era” in relations.

Biden told the ASEAN leaders that “a great deal of history of our world in the next 50 years is going to be written in the ASEAN countries, and our relationship with you is the future, in the coming years and decades.”

Vice President Kamala Harris was even more effusive, claiming that the U.S. would be present in Southeast Asia for “generations” and stressing the need to maintain freedom of the seas, a veiled reference to China’s growing assertiveness in disputed regions of the South and East China seas. She said, once again without mentioning China explicitly, that the U.S. and ASEAN “have shared a vision for this region, and together we will guard against threats to international rules and norms.”

Among the other outcomes, Biden also announced that his administration would provide $150 million to ASEAN to address issues related to infrastructure, security, pandemic preparedness, and clean energy. Other U.S. commitments included the future deployment of a Coast Guard vessel to the region to help bolster the region’s maritime security. Biden also announced the nomination of Yohannes Abraham, the chief of staff of his National Security Council, to be ambassador to ASEAN, a post that has been vacant since the beginning of the Trump administration.

As I noted prior to the summit, an important U.S. goal at the summit would be to encourage Southeast Asian nations to stiffen their stances against Russia due to its ongoing aggression against Ukraine. Sure enough, in the joint vision statement, the two sides referenced the Ukraine conflict and reaffirmed their “respect for sovereignty, political independence, and territorial integrity.” The statement did not mention Russia by name, no doubt at Southeast Asian insistence. It also expressed the two sides’ deep concerns about the situation in Myanmar, which was not invited to the summit and represented at all official functions by an empty chair. It pledged to “redouble our collective efforts towards a peaceful solution in Myanmar that also reflects a continued commitment to human rights and fundamental freedoms, as outlined in the ASEAN Charter.”

While the summit hit all the right symbolic notes, it replicated a lot of the problems with the recent U.S. approach to the region, which one recent article described aptly as “rhetorically ambitious but substantively vague.” As several experts have noted, the $150 million pledged by the U.S. was a relatively slight figure in the context of the past amounts that the U.S. has pledged to the region, let alone China. In November, Beijing pledged $1.5 billion in development assistance for ASEAN over three years to fight the public health and economic impacts of COVID-19, while it has made available billions in infrastructure financing under its Belt and Road Initiative.

In this regard, Myanmar’s empty chair was also an apt symbol for the continued absence of perhaps the most important aspect of the U.S. engagement: economics and trade. Last October, Biden announced the creation of an Indo-Pacific Economic Framework (IPEF)  that would complement the strong security focus of Washington’s Indo-Pacific strategy.

The IPEF is yet to be formally launched, and is likely to be unveiled during Biden’s visit to Japan and South Korea later this month. But the Biden administration has already signaled the limited nature of the framework. Instead of resembling a traditional free trade deal granting increased market access to participants, the IPEF will feature four “pillars” addressing clean energy, supply chains, anti-corruption, and “fair and resilient” trade.

For this reason, the IPEF met with a lukewarm Southeast Asian reception at the weekend’s summit, rating no mention in the post-summit vision statement. Speaking to a forum of U.S. businesses and other ASEAN leaders in Washington, Malaysia’s Prime Minister Ismail Sabri Yaakob called for Washington to “adopt a more active trade and investment agenda with ASEAN, which will benefit the U.S. economically and strategically.” Vietnam’s Prime Minister Pham Minh Chinh said ahead of the summit that Hanoi “would like to work with the U.S. to realize the four pillar[s] of that initiative,” but that the “concrete elements of that initiative” were “not yet clarified.”

The problem, as James Crabtree of the IISS noted in a recent article for Foreign Policy, is that the IPEF has been born out of a need to fill the void opened up by President Donald Trump’s withdrawal from the Trans-Pacific Partnership (TPP) that had been so painstakingly negotiated by the Obama administration. At the same time, it is forced to accommodate the domestic political resistance to TPP-style free trade deals.

The result is that the U.S. government is asking its partners to sign up to new rules around anti-corruption and high labor standards, without offering the market access that would normally sweeten such a deal. As a result, Crabtree argued, the IPEF amounts to an “all-pain, no gain economic deal” for Southeast Asian countries. One might also add that China’s tolerance for “relaxed” labor standards and its willingness to work with corrupt local elites is precisely one of the reasons that Southeast Asian governments find it an attractive economic partner.

Only so much can be achieved during a two-day summit involving officials from 10 countries, and the overriding purpose of such events is to broadcast commitment, establish personal rapports, and to set relations on an upward trajectory. But the summit reflected familiar shortcomings in the U.S. approach toward Southeast Asia, which are in turn the product of structural changes to the triangular relationship between the U.S., China, and Southeast Asia since the end of the Cold War.

The most importance of these is Southeast Asia’s proximity to China, and the concomitant economic interdependence that now characterizes ties between the two regions. Proximity makes Southeast Asian nations unwilling to spurn their economic ties with China, while also making Southeast Asia a region of relative importance for Beijing compared to Washington. As a result, consistent engagement with the region is something like the default setting for Chinese foreign policy, whereas the U.S. commitment to the region is one that has to be frequently renewed.

This raises the question of whether the commitments of the present administration will extend to the next one. Writing in the Bangkok Post today, Kavi Chongkittavorn argued that, “From now on, ASEAN-U.S. relations will no longer be on ‘auto-pilot’ mode as has been the case for the past six years.” But it is hard to say with confidence that this will be true beyond November 2024. Vice President Harris’ generational pledge to Southeast Asia is cast into doubt by the uncertainty of the quadrennial electoral cycle, and the increasingly poisonous partisanship of U.S. politics.

As The Diplomat’s Prashanth Parameswaran noted at the time of the 2016 Sunnylands summit, “The convening of the first-ever standalone meeting with Southeast Asian leaders in the United States is both a powerful symbol of this administration’s commitment to Southeast Asia and a clear signal to its successor about the importance of ASEAN.” However, less than a year later, this successor – Donald Trump – had withdrawn the U.S. from the TPP, the Obama administration’s signature trade deal, throwing U.S.-ASEAN relations into uncertainty.