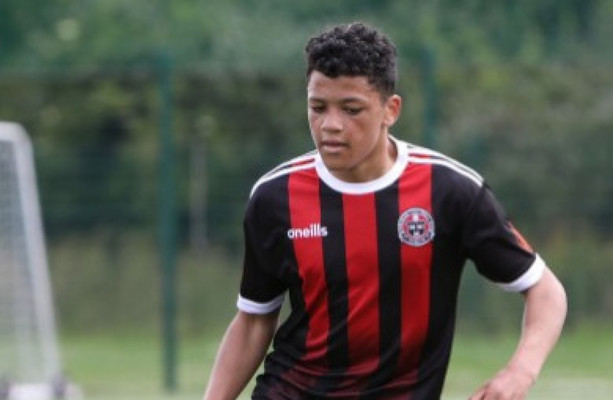 JOSH DUNNE, WHO was stabbed to death during a “stand-off” over a stolen bicycle, sustained two stab wounds to the chest including one that penetrated the main artery in the body, a pathologist has told the Central Criminal Court.

When asked by defence counsel whether one movement of the knife could have inflicted the two wounds to the 16-year-old’s chest, Assistant State Pathologist Dr Heidi Okkers said it was possible that “one sweep” could have caused both wounds but it would have been “very difficult”.

George Gonzaga Bento (36), a Brazilian national, with an address in East Wall in Dublin 3 is charged with murdering 16-year-old Josh at East Wall Road, East Wall on January 26, 2021.

Mr Bento is also accused of producing an article in a manner likely to intimidate another in the course of a dispute or fight, namely a utility knife. The defendant is further accused of assault causing harm to two other young men on the same occasion. The delivery cyclist has pleaded not guilty to each of the four counts.

The prosecution alleges that Mr Bento, a delivery cyclist, produced a knife during a “stand-off or confrontation” with a man on a moped who had stolen another delivery cyclist’s bike. Josh Dunne and other youths arrived at the scene and got involved in the confrontation.

Giving evidence today, Dr Okkers told Garret Baker BL, prosecuting, that she carried out a postmortem on Mr Dunne on January 27, 2021, where she found that he had sustained two stab wounds to the chest. She said the cause of death was a stab wound to the chest and that an exact replica of the knife was shown to her on February 5.

The witness said that Josh, who weighed 76 kgs, was Covid-positive at the time of his death. It was probable that he did not know he had the virus or had no symptoms of Covid, she told the jury.

The deceased’s grey Nike jacket, Dr Okkers said, was shown to her at the post mortem and had two defects at the front, which had penetrated the material.

In her evidence, Dr Okkers said the first stab wound to Josh’s chest was almost in the middle of his chest and was 2.3cm in length. It was 6.5cm above and to the left of his right nipple and was 1.5cm wide.

The wound pierced the muscle in between the ribs and had entered the chest cavity, piercing the upper part of the lung, close to the heart. It had also penetrated the ascending aorta, the largest blood vessel in the body. The depth of the track into the body was approximately 10cm.

There was also evidence of a second stab wound to the chest, which was very close to the left nipple. It was 2cm in length, 2cm wide and was vertically oriented like the other wound, she said. The upper margin was pointed and the bottom had a fishtail, she said, meaning that either the victim had moved or the accused was moving. The wound, which had a depth of 4cm, had pierced the skin and a layer of fat underneath.

Dr Okkers pointed out that there was an incised wound to the back of Mr Dunne’s left thumb and the back of the left hand. These were in keeping with defensive or offensive type injuries, she said.

There were several abrasions on the schoolboy’s body including over his nose, the left point of his chin and the bottom part of his left shin. The abrasion to the nose was in keeping with the collapse of the deceased on the ground, she said.

The outer covering of the heart was surrounded by 200ml of blood and the sac had been penetrated by the stab wound. The injury to the aorta was 0.9cm.

A toxicology report detected no drugs and alcohol in Mr Dunne’s system.

The cause of death was a single stab wound to the right side of the chest with no other contributing factors, she said.

Under cross-examination, the witness told Padraig Dwyer SC, defending, that one of the stab wounds to the chest was fatal as it had penetrated the chest. The second wound cut through subcutaneous tissue but did not penetrate the chest cavity.

When asked by Mr Dwyer if one movement of the knife could have inflicted the two wounds to the chest, Dr Okkers said it was possible that “one sweep” could have caused both wounds but that would have been “very difficult”.

In re-examination, Mr Baker put it to the witness that she was asked by the defence to explore whether one sweeping movement or one movement could have caused both of the main injuries to Mr Dunne’s chest and that she had put this in context by saying that the direction of each of the wounds were completely different. “Yes, which might indicate there were two stab movements,” she replied.


Following this, a 17-year-old boy, who cannot be named because he is a child, told Mr Baker that he did not see anyone being stabbed that night but did remember Josh dropping to the ground.

The boy said he tried to check for Josh’s pulse and, although he did not know how to, he had given him mouth to mouth at the scene.

Under cross-examination, the boy agreed with Keith Spencer BL, defending, that it was obvious that the man on the moped was the aggressor on the night and was trying to steal a bike.

The boy said he saw Josh run over to the fight and “throw punches” at one of the Deliveroo men. Mr Spencer put it to the witness that he didn’t say this in his statement to gardai. “I don’t know,” he replied.

Defence counsel Mr Dwyer put it to another 17-year-old boy, who also cannot be named because he is underage, that the statement he made to gardai was “completely at odds” with what can be seen in the CCTV footage that night and that there were “multiple inaccuracies” in it.

The boy agreed that his statement was “completely at odds” and that he had got involved in the incident before Josh that night.

He also agreed that he knew the man on the moped was stealing a bike. However, he denied that he was trying to give gardai “a whitewash version of events”.

“If the jury was to believe you and not have the CCTV footage they would have had a distorted picture of what happened that night, does it not bother you that there is a man on trial for murder?” asked Mr Dwyer. “It does,” replied the boy.

When asked if it bothered him that several other people were involved in the attack before Josh had got involved, the boy said it did.

Under re-examination, the boy told Sean Guerin SC, prosecuting, that he had hit one of the Deliveroo driver’s twice in the face that night.

The trial continues tomorrow before Mr Justice Paul Burns and a jury of five men and seven women.