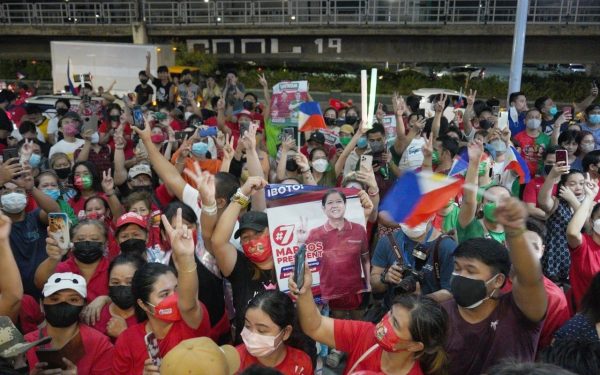 Marcos might not have been the ideal choice of many U.S. policymakers, but he offers the opportunity for a more stable and predictable partnership.

Supporters of Ferdinand Marcos Jr. celebrate his resounding victory at the Philiippines’ presidential election on May 9, 2022.

The victory of Ferdinand Marcos Jr. at the May 9 presidential election in the Philippines gives the United States an opportunity to regain influence with one of its oldest allies in the Indo-Pacific at a time of heightened competition with China. But Washington will need to seize this opportunity and not rely on missteps by Beijing.

The U.S. started losing ground in the battle for influence when Rodrigo Duterte won the Philippines’ 2016 presidential election and proceeded to tilt his country toward China. Duterte, who was barred from running again by the country’s single-term limit, also launched an aggressive war on drugs that prompted frequent accusations of human rights abuses and repeatedly criticized the U.S. and other Western countries in graphic terms.

As of this writing, Ferdinand “Bongbong” Marcos, the son and namesake of the notorious dictator who ruled the Philippines for more than 20 years, had achieved a landslide victory in the election, and is set to succeed Duterte on June 30. While his victory is not the ideal outcome for Washington – among the main contenders, Vice President Leni Robredo would likely have tilted the most strongly back toward the U.S. – a Marcos victory does offer an opportunity to reset bilateral ties. Indeed, all the candidates to varying degrees represented an improvement on Duterte, as far as Washington is concerned.

U.S.-Philippines relations have, in fact, already started warming over the last year, though that is largely thanks to blunders by China. In particular, Beijing’s intensifying use of its growing “maritime militia” and coast guard to put pressure on the Philippines in disputed waters/reefs in the South China Sea has angered many Filipinos. Beijing has also failed to deliver on most of its infrastructure promises to Manila, which Duterte used to justify cozying up to China.

These stumbles have undermined Beijing’s vaccine diplomacy and forced Duterte to ease back from his controversial pivot to China, creating an opening for Washington. Defense Secretary Lloyd Austin visited Manila last summer and announced the renewal of the Visiting Forces Agreement (VFA), a key bilateral security pact that had been under renegotiation for several years. (Duterte’s team argues the U.S. made concessions). The U.S. has also reiterated the promise, first made by Secretary of State Mike Pompeo in 2019, that the bilateral Mutual Defense Treaty can be invoked for vessels and aircraft attacked in disputed territory. The joint military exercises that took place last month between the U.S. and Philippines were the largest during Duterte’s period in office. Meanwhile, the U.S. and United Kingdom have donated more vaccines to the Philippines than China.

Duterte’s departure from office presents an opportunity for the U.S. to regain even more ground. Foreign policy rarely figures prominently in Philippine elections, but Beijing’s actions in the South China Sea are driving presidential candidates to show – in some cases through elaborate stunts – that they would stand up to China. (It should be noted, however, that during the 2016 campaign Duterte famously promised to ride a jet ski to a disputed island and plant a Philippine flag, only to embrace Beijing after taking office.)

Unlike Duterte, Marcos is not ideologically opposed to the U.S. and the West. Marcos derives many of his views from his late father, who was broadly pro-U.S. and retired in Hawaii after being driven from power by the army-backed People Power uprising in 1986. That said, China is now far more powerful than when the dictator was in charge, and Beijing is already working hard to cultivate ties with Marcos Jr. A Marcos administration would avoid poking the dragon too hard given the importance of economic relations. Indeed, some of Marcos’s recent remarks – including his insistence that South China Sea tensions should be resolved bilaterally with China, without U.S. involvement, and that the Philippines is incapable of militarily resisting China – are reminiscent of Duterte’s approach.

Yet Marcos at least offers the opportunity for a more stable and predictable partnership with Washington, even if one not fully aligned on issues such as human rights. To develop this partnership and bring the Philippines more tightly into its fold, the U.S. could make the Philippines –one of the few democracies in the region and a more natural fit for Washington’s “free and open Indo-Pacific” theme – a priority in Southeast Asia once again, albeit while managing expectations. To this end, it was notable that President Joe Biden was one of the first foreign leaders to speak to Marcos after the latter’s electoral victory. Marcos’ spokesman noted afterwards that relations with the U.S. will improve under the incoming administration in the Philippines.

The U.S. could, for example, support further military modernization in the Philippines, building on the renewed VFA. Though U.S. domestic politics makes a free trade agreement unlikely, there are other options for closer economic cooperation, including in the digital space and in infrastructure, which is likely to be a priority for the next president. Collaboration on renewable energy could help climate goals while reducing the risk that the Philippines faces an energy crisis – or pursues joint oil exploration with China – once its main gas field runs out later this decade.