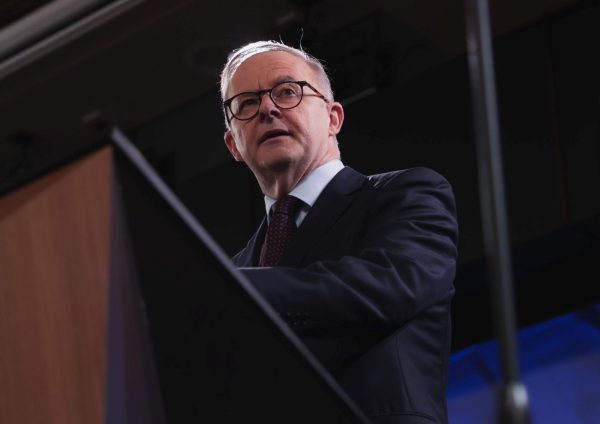 Australia’s general election is on May 21, just three days before the summit in Tokyo. It’s unclear who would represent Canberra if the polls usher in a change of government.

Labor Party leader Anthony Albanese speaks at the National Press Club on May 18, 2022.

Australia’s opposition leader Anthony Albanese said Wednesday that he will begin rebuilding trust in his nation if he wins weekend elections and attends a summit with U.S., Indian, and Japanese leaders in Tokyo just three days later.

Albanese told the National Press Club that he will be “completely consistent” with the current administration on Chinese strategic competition in the region if he travels to the summit of the Indo-Pacific strategic alliance known as the Quad on Tuesday.

Albanese has said he would have himself sworn in as prime minister as soon as Sunday or Monday in order to attend the summit.

Prime Minister Scott Morrison on Wednesday would not say who might represent Australia in Tokyo.

Morrison said there were “conventions in place” to deal with the election but did not elaborate on how those conventions would work if the result were close.

Albanese blamed Morrison for a “whole series of Australia’s international relations being damaged.”

He said Australia had been placed in the “naughty corner” in United Nation’s climate change negotiations by refusing to adopt more ambitious emissions reduction targets at a November conference.

“One of the ways that we increase our standing in the region, and in particular in the Pacific, is by taking climate change seriously,” Albanese said.

If his Labor Party triumphs in the polls, U.S. President Joe Biden’s administration and Australia “will have a strengthened relationship in our common view about climate change and the opportunity that it represents,” Albanese said.

The Morrison government aims to reduce Australia’s emissions by 26 percent to 28 percent below 2005 levels by 2030, a target that has not changed since 2015.

Labor has promised to reduce emissions by 43 percent by the end of the decade.

In addition, Albanese said that Morrison misled the United States that a secret plan to provide Australia with a fleet of submarines powered with U.S. nuclear technology had the support of Albanese’s center-left Labor Party. In fact, Labor wasn’t told of the plan until the day before it was announced in September.

Albanese also accused Morrison of leaking to the media personal text messages from Emmanuel Macron to discredit the French president’s complaint that Australia had given no warning that a French submarine contract would be canceled.

In November, French Ambassador to Australia Jean-Pierre Thebault described the leak as a “new low” and a warning to other world leaders that their private communications with the Australian government could be weaponized and used against them.

Labor also has described a new security pact been China and the Solomon Islands as Australia’s worst foreign policy failure in the Pacific since World War II.