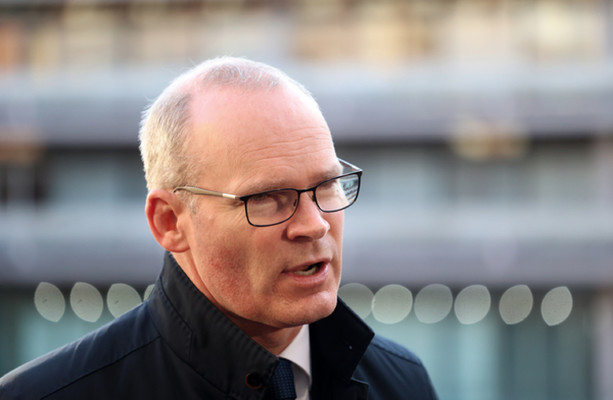 FOREIGN AFFAIRS MINISTER Simon Coveney has said that he has “serious concerns” around elements of newly published legislation by the UK Government that offers an effective amnesty for Troubles-era crime.

The proposals, first mooted last year, are almost universally opposed by political parties across the UK and Ireland as well as victims’ groups.

Immunity will be offered to those who are deemed to have cooperated with an information retrieval body.

The Independent Commission for Reconciliation and Information Recovery (ICRIR) will be headed by a judge.

The legislation will also stop future inquests and civil actions related to the Troubles, however it does not fully close the door to criminal prosecutions.

It is understood victims’ campaigners are considering mounting a legal challenge to the Bill.

In a statement this afternoon, Coveney called it disappointing that the UK were opting to unilaterally introduce legislation on a Troubles amnesty rather than working to reach an agreement across all parties.

I want to be clear that it is disappointing that the UK Government have chosen to unilaterally introduce legislation, when our starting point was the need for an agreement to be reached between both Governments and the parties, and with the needs of victims and survivors at the heart of the process.

He added that to ensure any progress lasts, it would be achieved through engagement and consensus.

“We had strongly urged the British Government to come back to the table and find a way forward together, and it is regrettable that they have not done so,” said Coveney, adding that he remains open to resume talks.

Coveney said that the Government have “serious concerns” on several aspects of the bill, in particular whether or not the bill complies with Article 2 of the European Convention on Human Rights and other international human rights obligations.

“I know that many families will be upset by the publication of this Bill, including those waiting for inquests or pursuing civil litigations.

“There will be many that understandably feel that immunity, conditional or otherwise, may be more about protecting perpetrators instead of pursuing justice and getting to the truth in such cases.

“It is vital that those concerns are heard and fully understood.  It is also vital that the process for dealing with the legacy build rather than erode trust and confidence.

“Ultimately, genuine reconciliation can only be achieved through such trust and confidence.”

He said that he could not support the newly published legislation currently, but said that the Department of Foreign Affairs would continue to engage with the UK Government.

In the Dáil yesterday, Sinn Féin leader Mary Lou McDonald likened the actions of the UK Government to those of a “rogue state”.

“We have had really shocking and devastating news from Westminster this morning. For families, for communities that spent decades fighting for truth and justice for their loved ones lost in the conflict.

“This is an outrage. It is totally outside of international law and I have to say it means definitively now the shredding of the Stormont House Agreement. It is to me akin to the actions of a rogue state.

“They refuse to work in partnership with anybody, with the Irish Government. They treat families, survivors, with utter contempt.”

Earlier, the Sinn Féin Stormont leader Michelle O’Neill had attacked the legislation, saying it “appears to be to cover up and close down any investigation into British state policy in Northern Ireland over the last 50 years”.

“In effect, they’re like pouring concrete over Britain’s role in the conflict,” she told the BBC.

“There should not be an amnesty for anybody, this is absolutely all about the British Government trying to cover up their role in the conflict.

“The focus is on bringing forward an amnesty that supports a policy intent by them to cover up and to prioritise the wants of British military above the needs of victims, and we have many families that are sitting this morning that are really concerned, and they’re devastated because this is so far-reaching.

“That is not the way to deal with the past and create a better future.”

The party’s policing and justice spokesman called the proposals an “amnesty through the back door for British state forces”.

Gerry Kelly said: “The British Government is acting like a totalitarian state and their actions are a cruel blow to families who have waited more than five decades on truth and justice.”

The current system for addressing the legacy of the Troubles in NI is failing everybody.

The legislation I have introduced today will better support victims and families, and help NI look to its future and heal divisions caused by its difficult past.
(1/5) pic.twitter.com/wUNz8qDuq5

“Victims of wrongdoing must always have access to justice for the suffering they endured in the Troubles.

“If this Bill undermines access to justice for innocent victims then it will be a further corruption of justice,” he said.

“Ninety per cent of the deaths in the Troubles were deliberate killings by terrorists. Many of those terrorists have never stood in court.

“Those victims’ families deserve justice. No terrorist should ever be able to stop looking over their shoulder.

“We will be studying the detail of this Bill and will continue to be a voice for innocent victims and those who stood against terrorism during those dark days,” he added.

UUP leader Doug Beattie said he has raised serious concerns around the Bill.

“In particular I want to see a mechanism emerge that can successfully and effectively target those who directed terror and gave the orders for shootings and bombings, even if they themselves were not present to pull a trigger or plant a device,” he said.

“Terrorist godfathers must be held accountable as must those who continue to justify their actions.”

SDLP leader Colum Eastwood has described the decision to proceed with the legislation as an “egregious dereliction of duty following opposition from victims and survivors, political parties and the Irish Government”.

“In their rush to protect former soldiers they will shut down routes to justice through inquests and civil cases, shield paramilitary killers and fundamentally alter the rights of those who have lost loved ones,” he said.

Earlier, Raymond McCord, whose son was killed by loyalists, described government proposals for dealing with the past as “disgusting”.

McCord said the “clear message to victims was to eff off”.

“It’s disgusting. Brandon Lewis says it’ll bring reconciliation, I don’t want to be reconciled with the murderers of my son, and neither does anyone in my family,” he told the PA news agency.

“Throwing litter in the street will be a bigger crime than mass murder, this whitewash of all these murders, to turn around and say it’ll bring reconciliation – I’m from the unionist community, I don’t need this to reconcile me with someone from the nationalist community because they are my friends.

“The proposals are unworkable and they (Government) know it, and I will do everything in my power to stop these going through Parliament.”

Amnesty International has called the Bill a “disturbing interference in the justice system”.

“Now is the time for the UK Parliament to decide if it will allow the Government to cast aside the rule of law and sacrifice victims’ rights to protect perpetrators,” she said.


“That would send a very troubling message to victims here as well as to human rights abusers all over the world.”

Unilateral action by the British government in presenting their Legacy Bill seeks to pull down the shutters on hundreds of family campaigns for truth and justice.

Prioritising the demands of their state forces over families is unjust and cruel. I stand with the families.

Michael O’Hare, brother of Majella O’Hare, a 12-year-old girl shot dead by a soldier in 1976, is among those seeking an independent investigation into a loved one’s killing.

“We do not want this. The Bill gives no consideration for the rights and needs of victims. It tells us the lives of our loved ones did not matter.

“I need all those in power to stand with me and other victims and reject this bill – deliver us the truth and justice we have fought so long and hard for,” he said.

“The passage of time has not diminished the devastation of losing my sister Majella to bullets from a soldier’s machine gun. This legislation is shameful, we will oppose it every step of the way.”

Earlier Secretary of State Brandon Lewis described a “very difficult area”, adding: “It can be very painful for people.”

However he said the current system “isn’t working for people”, and that it should not take 50 years for people to get information about the death of their loved one.

He said immunity would be judged by the independent body based on how people have engaged.

“That would be a matter for the independent body which will also have a judge involved in that process,” he said.

More than 3,500 people were killed during the Troubles, including more than 1,000 members of the security forces.