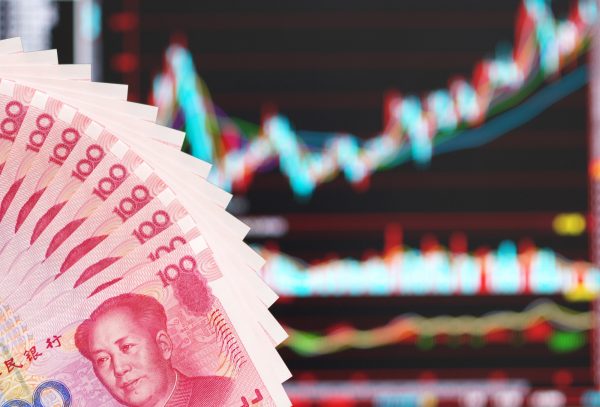 China’s economic downturn in recent weeks has been worse than expected, owing largely to a fresh flare-up of COVID-19 and the country’s tough stance on lockdown measures. The world’s second-largest economy saw significant drops in retail sales and losses in factory production, with both dipping below market expectations.

In total, China’s National Bureau of Statistics reported that retail sales fell 11.1 percent in April 2022 in comparison to a year ago. Although Reuters’ survey of economists forecast a drop in figures, the reported total fell way below the anticipated 6.1 percent downturn and significantly lower than the 3.5 percent fall in sales seen in March.

Alongside disappointments in retail, industrial production fell 2.9 percent in April, reversing an upwards trend of 5 percent in March. The nearly 8-point swing in production represented China’s worst slowdown in industry productivity since February 2020, when the country’s economy struggled to overcome the downturns caused by the initial COVID-19 outbreak.

As we can see from the recent performance of the Shanghai Stock Exchange (SSE) Composite Index, which encompasses all the stocks traded on the SSE, the market fell more than 17.5 percent between the beginning of 2022 and early May.

Although the SSE is still performing better than its initial COVID-19 dip, the sustained decline that the market has undergone in 2022 will undoubtedly concern investors.

As the nation that suffered the initial COVID-19 outbreak, China has subsequently adopted a strict “zero COVID” policy, geared toward stamping out new cases by imposing widespread testing and strong lockdown measures.

“The Politburo stated that they will not abandon zero COVID any time soon. The economy remains vulnerable to any future outbreaks so investors are recalibrating their risk exposure,” said Carlos Casanova, a senior economist for Asia at UBP in Hong Kong in an interview with Al Jazeera.

“The country has a new record disease rate for coronavirus, so the authorities are imposing a lockdown regime in entire regions,” explained Maxim Manturov, head of investment advice at Freedom Finance Europe. “What matters to investors is that China has no inflation problems like the rest of the world, which makes it possible to count on a relatively soft policy from the local central bank in 2022. The price is already priced in negatively, which is why stocks are cheap now. Strong macroeconomic statistics and statements by Chinese authorities to support their companies will support Asian stock markets.”

Meanwhile, China’s unemployment soared to new highs of 6.7 percent throughout the country’s 31 largest cities in April 2022, with the national rate not far behind at 6.1 percent. That represents a rise of 0.3 percentage points from March. Jobless rates for young people aged between 16 and 24 reached a concerning 18.2 percent.

Tellingly, the downturns have also led to slowdowns in terms of business and household demand for borrowing. According to the People’s Bank of China, total social financing halved in April in comparison to the same month last year, with 910.2 billion renminbi ($134.07 billion) issued.

The Chinese government’s swift action in cutting mortgage rates for first-time homeowners is likely to help remedy this – should the country successfully avoid any further flare-ups of COVID-19 cases in the coming weeks and months. Considering that real estate and property-related industries account for around 25 percent of China’s GDP, the strength of the property market is a key indicator of the nation’s overall economic health.

Despite the challenges that faced China’s markets in April, equities in both China and Hong Kong rebounded well, as the decline of COVID-19 cases led to new optimism for investors who have been eager to buy up stocks at a discounted price.

Stocks also took on better sentiment in Hong Kong, as a cluster of Chinese tech firms made healthy gains following a challenging series of weeks.

This turnaround in market conditions has been driven largely by indications that China’s second major wave of COVID-19 infections is beginning to ease. Infection rates appear to be falling toward pre-April 2022 levels below 10,000 cases.

“A drop in Covid cases in Shanghai and increased expectations of policy impetus to buoy growth in the second half are factors working together at this stage. Longer-term funds could be buying the dip, while short-term money could also be getting more active to trade a technical bounce,” said Du Kejun, partner at Beijing Gelei Asset Management Center Limited Partnership.

Although China appears to have turned a corner in its fight against rising COVID-19 cases, the events of April are a cautionary tale for countries that are currently ill-prepared for future waves of the pandemic. The severe disruption caused by COVID-19, albeit through weaker strains of the virus, can still significantly impact economies around the world.

Despite this, newfound optimism is slowly creeping back into the markets as the SSE Composite Index remains marginally higher than its pre-COVID levels despite the widespread upheaval. While there are still issues with employment rates and the ever-present risk of the virus, China may be in for a more positive second half to 2022 should markets stay clear of any further complications.