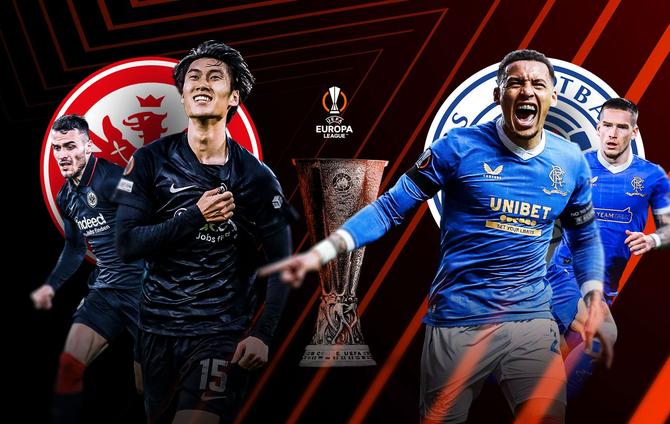 Eintracht Frankfurt and Rangers face off on Wednesday in Seville with a shot at Europa League glory on the line. As ever, you will be able to keep up with all of the action via beIN SPORTS.

Frankfurt head into the contest in southern Spain with an impressive run to the showpiece final, and has not tasted defeat. Oliver Glasner’s side has beat the likes of West Ham, Barcelona and Real Betis on route to Seville, and backed by a rowdy and passionate fanbase they will be looking to reach a fairytale conclusion to what has been a memorable European tour for the Bundesliga side.

Two defeats and a defeat from their last three domestic games suggest that Frankfurt have been saving themselves for the European adventures and so far the gamble has paid off, till now. Although in terms of European football for next season, that remains in the balance with a win against Rangers the only route for the 2022/23 campaign after an eleventh place finish.

In Filip Kostic, Frankfurt has a flying wing-back who has impressed in the Europa League, including an eye-catching brace in the 3-2 win against Barcelona in the quarter-finals. The Serbian international is adept defensively and loves to bomb forward at every opportunity and could be a crucial offensive outlet should Frankfurt go all the way.

In team news, defender Evan Ndicka is likely to return to the side after being taken off as a precaution in the final league game against Mainz. With five goals in the tournament so far, Daichi Kamada will be looking to make history on Wednesday by becoming the first Japanese player to score in a major European final.

As for Rangers, they head to their first European final since the 07-08 season, where they lost to Zenit Saint Petersburg in the UEFA Cup final. After defeating the likes of Borussia Dortmund and a memorable semi-final second leg win over RB Leipzig, many Rangers fans will be hoping their side can put away a third German side on route to lifting the Europa League title.

Rangers fans will be heading to Seville with plenty of expectation, and they have every right to be confident based on their battling performances in Europe this season. Wins over Braga and Red Star Belgrade along with the eye-catching win over Leipzig, have underlined the coaching credentials of boss Giovanni van Bronckhorst. A Europa League win would undoubtedly make up for the sadness of losing the Scottish title to bitter rivals Celtic.

“How can a right wing-back be a top goal scorer in a European competition?!”

Andy Gray has hailed @James_Tavernier and how a win for Rangers tonight can help the fortunes of Scottish football. #beINUEL #UEL #UELfinal pic.twitter.com/YrJOMtJc4h

Club captain James Tavernier has been inspirational during the European campaign and with seven goals he is currently the leading scorer in the Europa League. Whilst former Rangers player and beIN SPORTS pundit has been shocked at the goals from the right-back, many fans have been impressed at how the Bradford born defender has led by example in Europe this season. Don’t be surprised if Tavernier popped up with a timely goal in the final.

In team news, the long term absence of star striker Alfredo Morelos has been a major blow over the last few months, but Rangers have adapted appropriately. The return of striker Kemar Roofe will be a huge boost to morale whilst the likes of Ryan Kent, Scott Wright and Borna Barisic should return to the starting lineup after being rested over the weekend.

It certainly promises to be a fascinating contest as Frankfurt and Rangers fight it out for the UEFA Europa League title. Catch all the action exclusively with beIN SPORTS.