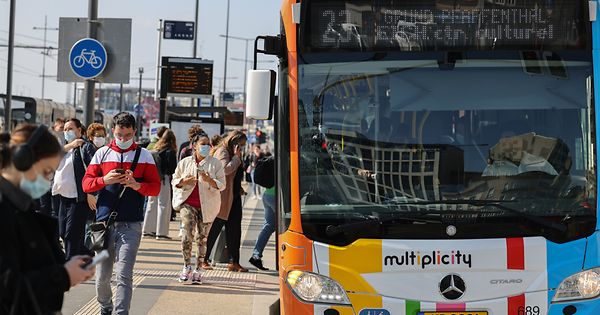 Masks could come off on public transport in Luxembourg

People could soon be able to take the bus, train and tram without a face covering, under draft law to be presented in parliament

People could soon be able to take the bus, train and tram without a face covering, under draft law to be presented in parliament

People could soon be able to travel on public transport in Luxembourg without having to wear a mask, Health Minister Paulette Lenert said on Wednesday.

Masks have not been mandatory in most places since March but it is still necessary to wear one on public transport, in hospitals and in care homes.

A draft law to lift the mask mandate on buses, trains and the tram “very soon” will now be put forward and the bill could be presented to lawmakers this week, Lenert told lawmakers on Wednesday, according to a statement on parliament’s website.

“Similar measures” could also be put in place for hospitals and care homes, the statement added.

Since the start of this week, people travelling on public transport in France have been able to do so without having to wear a mask, meaning cross-border workers can choose whether to wear a mask when they start their commute, but then have to put one on once they cross the border into the Grand Duchy.

Passengers aboard national airline Luxair can decide whether to wear face masks during their journeys, depending on the requirements at their destination.

No masks will be required when travelling to Luxembourg or Berlin, but coverings will still be needed when flying to Hamburg or Munich and Spain, Italy or Portugal, where a mask mandate on public transport is still in place.

The relaxation of the measures comes as the number of infections indicate the virus is continuing to recede in Luxembourg. There are currently 14 people in hospital in the Grand Duchy as a result of Covid-19, one of whom is in intensive care, with 432 new infections recorded on Wednesday, according to the most recent figures.

Lawmakers will debate a petition which calls for a halt to the government’s plans to introduce mandatory vaccination against Covid-19 for people aged over 50, after the campaign secured enough support to be raised in parliament.

Luxembourg is continuing to monitor infection rates and hospitalisation figures to determine whether a plan for a compulsory vaccine is appropriate or necessary, Justice Minister Sam Tanson said last month.