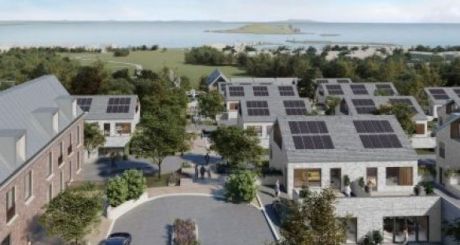 The owners of Dublin’s scenic Howth Castle estate have offered to gift over six acres of land for the development of social and affordable housing as part of a move to secure contentious rezoning.

The 150 proposed homes would be made available, according to the plans, on an “exclusive” basis to buyers with ties to the affluent north Dublin suburb who are currently priced out of the local market.

Tetrarch Capital, the real estate investor which bought the 530-acre estate in 2019, has set out detailed plans for its future, including the development of a retirement community also pitched at locals.

Although confident it can secure limited rezoning, the approach is unlikely to satisfy locals concerned it could precipitate further future housing development on land traditionally made up of green space and golf courses.

In a submission to Fingal County Council’s draft development plan, the Circle Voluntary Housing Association requested a 6.5 acre parcel of land on the Sutton side of the estate be rezoned from high amenity to residential.

A spokesman for Tetrarch declined to provide an estimated value for the land which would be acquired by Circle from WSHI Unlimited, the owner of Howth Estate and an affiliate of Tetrarch Capital, at no cost.

“Howth is an ageing and very affluent community. However, house prices are now at unattainable levels for almost all those hoping to own a new home there,” Circle chief executive John Hannigan said in his submission. The association puts the minimum price for a three-bedroom family home in Howth at €600,000.

“In order to secure the subject lands for the exclusive use of social and affordable housing for locals who need this housing, we would… ask that a special local objective is also included on the lands to this effect,” Mr Hannigan said.

Tetrarch has moved to quell local concerns that any amount of rezoning would open the floodgates for future development.

A spokesman for the company said it was “willing to sign a section 47 agreement with the council conditioning the development and use of the lands in question strictly on this basis”.

This Section 47 approach under the Planning and Development Act would, according to the owner, ensure land parcels earmarked for senior living and affordable and social housing “can only be developed and used for these purposes and for no other purposes”. It points to the use of the section in rural areas to limit the occupancy of housing to local people.

“Firstly such [Section 47] commitments can be given before the zoning and can be withdrawn once the zoning is achieved,” he said, referring to previous unrelated planning proposals elsewhere.

There is a concern, Mr O’Callaghan said, that no matter what guarantees are offered, they can “evaporate into thin air” once rezoning is accomplished.

Tetrarch has also argued that while the lands are part of a buffer around Howth’s Special Amenity Area Order, this was not an impediment to their development, another position likely to prompt local opposition.

The land owner said the site of the intended affordable homes currently sits on a golf course, but a reconfiguration of those amenities is planned for.