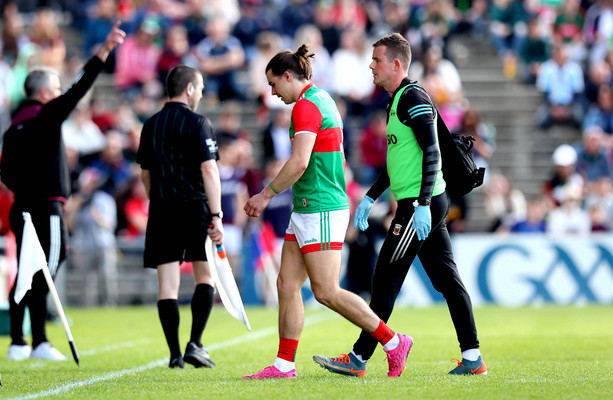 MAYO’S PROSPECTS AGAINST Monaghan in their qualifier clash on Saturday, June 4 will depend on several injury concerns, according to Marc Ó Sé.

However, per the Mayo News, James Horan is faced with a lengthy injury list. Last week it emerged defender Michael Plunkett was ruled out after sustaining a serious leg injury. Rob Hennelly, Paddy Durcan, Brendan Harrison, Jordan Flynn and Fionn McDonagh all missed the Galway game while Oisin Mullin departed early with a hamstring issue.

Ryan O’Donoghue is also reported to be facing a race to be fit.

“I was giving Mayo the nod here,” said Ó Sé.

“Monaghan may be a bit deflated after losing out in Ulster. It will be interesting to see how it goes now. Will Mayo be minus a serious list of players?

“Tommy Conroy is gone too. Ryan O’Donoghue has been a breath of fresh air. If he is out, he is a fella who anchored the forward line when Cillian O’Connor was out. Hennelly is a serious goalkeeper. You are down serious talent there.

“I just think it is bad luck. James Horan will be hoping these boys can get back fit.”

Ó Sé suggested one thing that may alleviate supporters’ concerns and quell the rumour mill was a squad update.

“I was listening to Jack O’Connor talk this week. I was very interested in the likes of Dan O’Donoghue, someone I was monitoring closely during the league and picked him as one to watch for the championship. Games are coming hot and heavy now and you want to be updated by the managers.

“Who is in? Who is out? I was disappointed to hear Dan Moynihan is injured but delighted to hear the update. You often wonder why isn’t this guy or that guy playing? Jack updated us. I think it gives a bit of goodwill as a result.”

To listen to the full episode, go to members.the42.ie.